For whom the bell tolls…

Wellington's cathedral has been evacuated and cordoned off – for fear that a quake-stricken neighbouring eight storey office building could collapse. 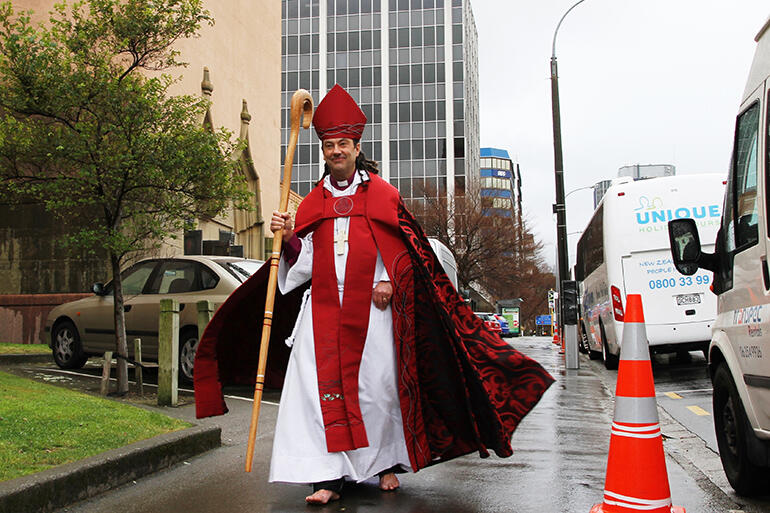 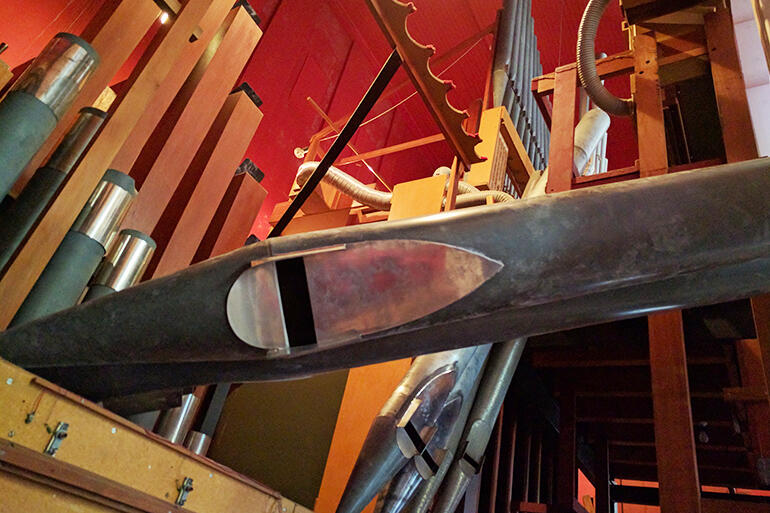 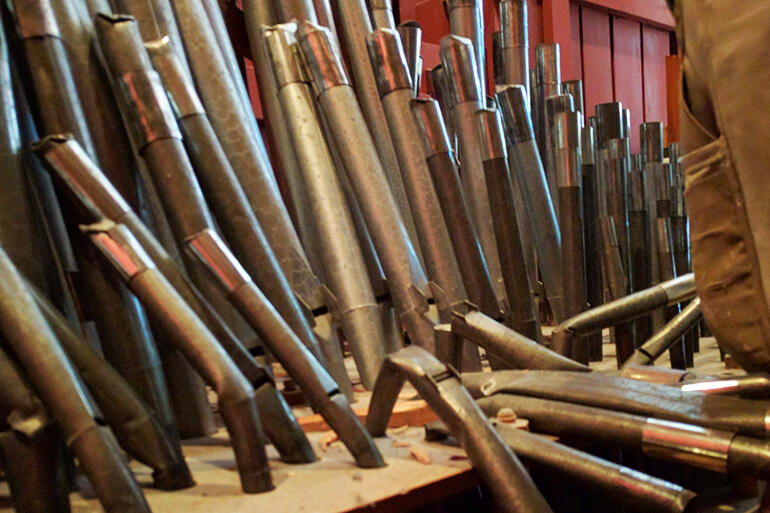 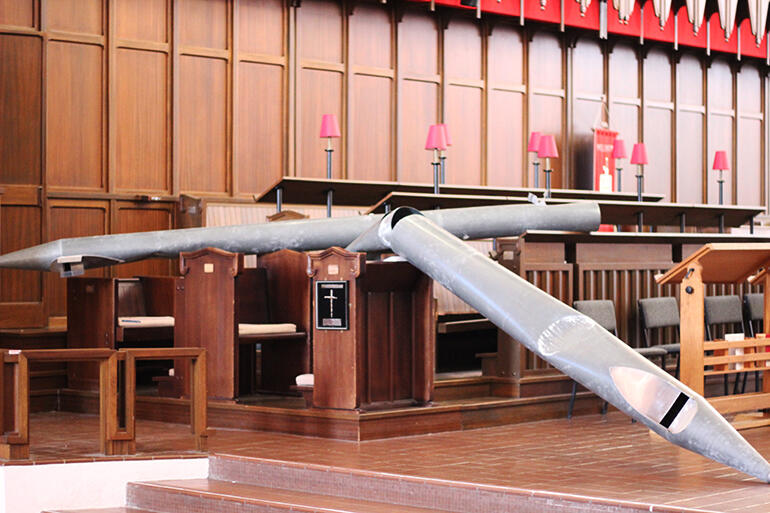 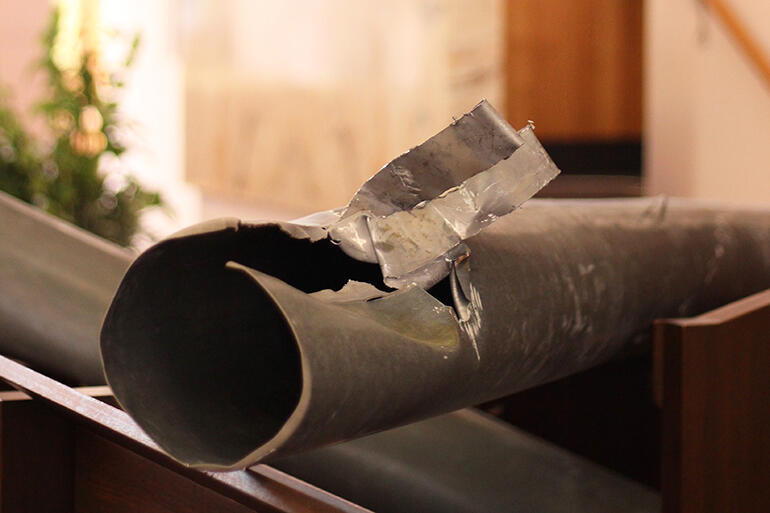 It could be weeks before it’s safe to return to Wellington’s Anglican Cathedral.

The neighboring eight-storey office block at 61 Molesworth St is in imminent danger of collapse, and police have cordoned off all the buildings on its four boundaries, including the Wellington Cathedral of St Paul.

The Cathedral Dean, the Very Rev Digby Wilkinson, says his cathedral suffered no structural damage – although the 7.5 earthquake which struck shortly after midnight on Monday morning has effectively wrecked the cathedral organ.

He expects it could take up to two years for that to be restored to working order, or replaced.

Meanwhile, his first concern is to find another venue for worship and staff offices.

That church now functions as a chapel to the school, rather than as a parish church, and the Cathedral’s ministry team are the chaplains to the school.

Some have suggested that the iconic Old St Pauls in Mulgrave St – which functioned as the original Wellington cathedral, and is still consecrated – could also be a possibility.

But in the wake of the shakes which began on Monday, that too has been closed, pending engineer’s safety investigations.

Dean Digby checked the cathedral about 1am on Monday – and that’s when he saw that all hell had broken loose in the organ loft.

Two of the largest pipes had toppled and crashed into the choir stalls. In the loft itself, many more pipes had broken from their moorings, fallen, and crushed and buckled other pipes as they fell.

Dean Digby and his maintenance team spent much of Monday clearing the wreckage, strapping the remaining pipes so they wouldn’t fall – and cordoning off the chancel.

At that stage, he says, the plan was to reconfigure the cathedral space by shifting the choir down to the nave.

“We’d been told we were fine to continue like that – but yesterday, around 3:30pm, there was another big wobble while we were having a meeting.

“Next thing I knew things were going nutty outside – and that’s when I learned that the building immediately to the north of us could collapse. We had to evacuate. The area around here is now completely cordoned off .”

Dean Digby says it’s now a case of “hoping for the best and planning for the worst.”

There are, of course, any number of scheduled services that urgently need to be relocated – including an ordination for 18 candidates, which had been set down to take place in the cathedral on Saturday week.

Dean Digby has been inside the cathedral during several of the aftershocks.

The cathedral doesn’t rock, he says – in fact, he’d rather be there during a shake than in just about any other Wellington building right now.

But it does roar. Somehow the cathedral acoustics amplify the sound of an earthquake, he says, just as they do with the singing of a choir.

Dean Digby reckons the scariest time was when the first earthquake came through, shortly after midnight on Monday.

That first shake was a prolonged one, and the Wilkinson family was huddled together in a doorway in the deanery.

The deanery is on Eccleston Hill, just a stone’s throw from the cathedral – and the bells were clanging crazily in the dark.

But compared with Kaikoura, Dean Digby thinks that Wellington has got off lightly.

“We take pride in being a resilient city – and this is a reminder that we are exposed.

“I actually think it’s been a big wake-up call for us.”

Meanwhile, in the South Island, the Diocese of Nelson hasn’t yet been able to make contact with anyone from its Kaikoura parish. The town is completely isolated, and landlines are down.

Churches elsewhere in Marlborough appeared to have survived more or less intact, says Regional Dean Richard Dyer – although he says people in Seddon have been cast back into the anxieties they felt after earthquakes ripped through their town in 2013.

And from the Diocese of Christchurch, there are reports of significant damage to the church in Waiau, a hamlet 30 kilometres east of Hanmer Springs. The church bell tower at Waiau has apparently sheared off from the body of the church.

When Taonga spoke to Bishop Elect Richard Wallace last week he didn't have any information to add to this report from the South Island. None of the ministry units in Upoko o Te Ika have suffered damage and there are none affected by closures in the Wellington CBD.