The Plough, the Chalice, the Sword 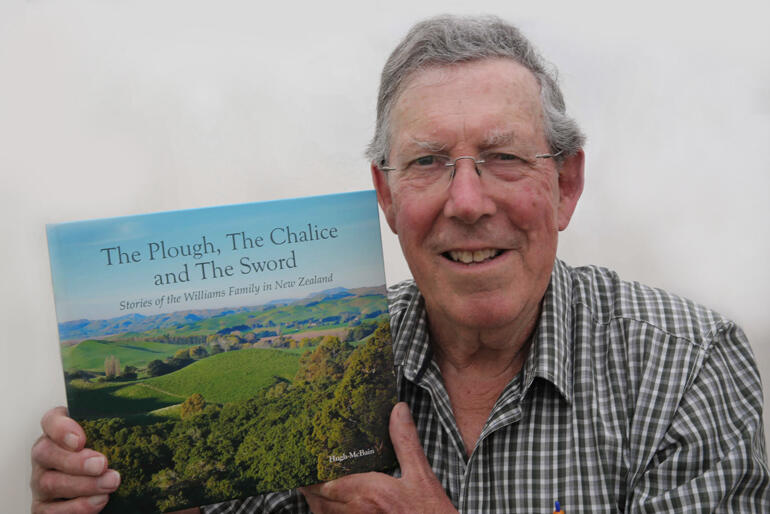 There are few settler families in New Zealand who have made such a significant contribution to Kiwi life, faith and culture as the descendants of Henry and Marianne Williams and William and Jane Williams.

Author Hugh McBain presents a comprehensive overview of how the Williams family have shaped church and society in Aotearoa New Zealand – through their stewardship of land, their important influence upon the shape and growth of the Anglican church here and elsewhere, the many church buildings they inspired and the leadership and sacrifice of many descendants in the various military campaigns overseas in which this country has been  involved.

Congratulations to the author on amassing such a large amount of succinct biographical data on the many branches of the Williams family.

Next year (2023) marks the 200th anniversary of the arrival of Henry and Marianne Williams as Anglican missionaries in the Bay of Islands.

Henry, and later his younger brother William, had offered to serve as missionaries under the auspices of the Church Missionary Society (CMS) of England, an Anglican evangelical body anxious to spread the Christian gospel to peoples that had not heard the Christian message.

Under the direction of Samuel Marsden, who was based in Sydney, both men were sent to Aotearoa New Zealand to share their message with Māori.

So, Hugh McBain, as a descendant himself, brings us an expansive account of both these men and their wives and of the subsequent generations. The stewardship of land and involvement in all things agricultural are the subject of another review.

The Williams missionary descendants have in most cases retained the initial policies of Henry and William, that of sharing the ‘good news’ firstly with Māori, then later Pākehā communities.

Governor Hobson needed the translation skills of Henry and his son Edward in drafting a Māori language version of the Articles of the Treaty of Waitangi, no easy task given that finding equivalent Māori words to express the meaning of the Treaty provided a real challenge.

The priority of sharing the Christian message with Māori was one which brought the Williams brothers and other CMS missionaries into conflict with the New Zealand Company and Pākekā settlers anxious to acquire land at all costs, as well as with the pro-settler Governor Grey. Hence the tragedy of the New Zealand Wars, the consequences of which we are still working through today.

The author provides short biographies of at least fifty seven ordained and lay church leaders, descendants of Henry and William. At least five became diocesan bishops. If the first two brothers were theologically evangelical in practice and belief, later generations of clergy reflect a much wider range of Christian thought and practice as most sought higher education academically and theologically both here and in Britain.

This comprehensive and remarkable family history by Hugh McBain will be of prime interest to wider family members and to those wishing to know how this remarkable family has contributed to countless communities and peoples in Aotearoa New Zealand. The large selection of photographs of family members helps the reader appreciate how descendants have settled into and influenced Kiwi life and society.

The generosity of the Henry and William Williams Memorial Trust continues to support mission work both among Māori and overseas missions, a trust originally set up by Archdeacon Samuel Williams, the founder of Te Aute Maori Boys’College, Hawke’s Bay.

The foreword by Archbishop Emeritus Sir David Moxon notes that the author’s comprehensive account ‘is timely and valuable and will become a taonga for many.’ The celebrations next year will hopefully acknowledge how the Williams descendants have continued to contribute to the life of Aotearoa New Zealand and, when called upon, to serve the nation militarily overseas.

'The Plough, The Chalice and The Sword: stories of the Williams family in New Zealand'