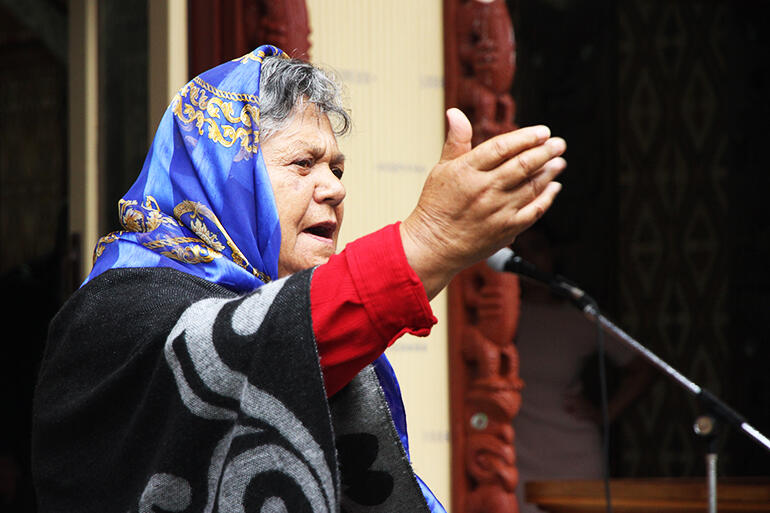 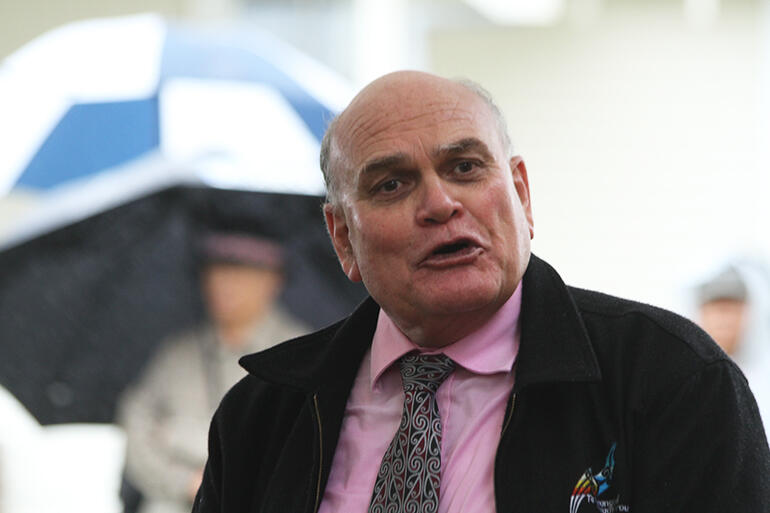 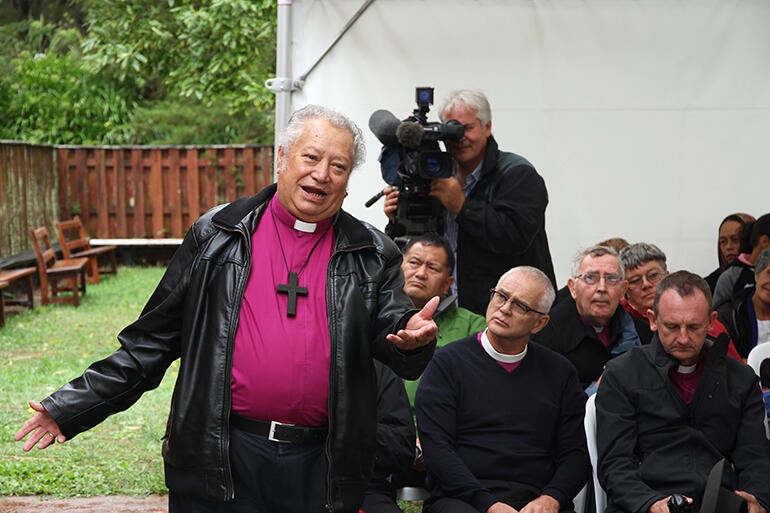 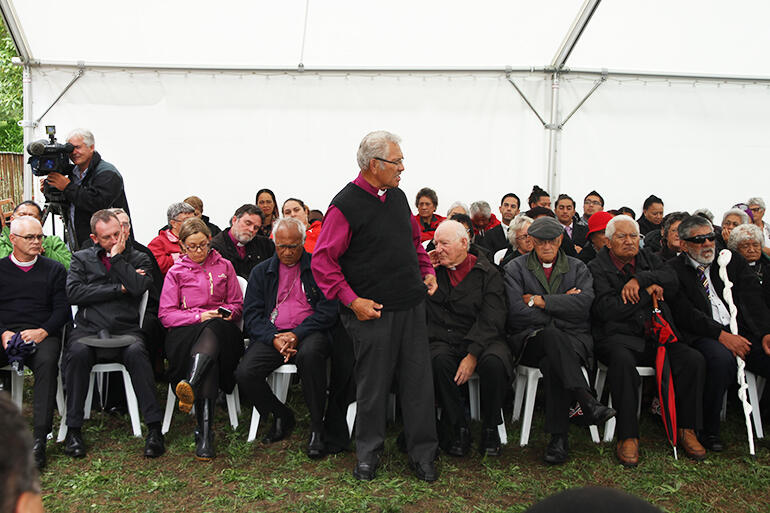 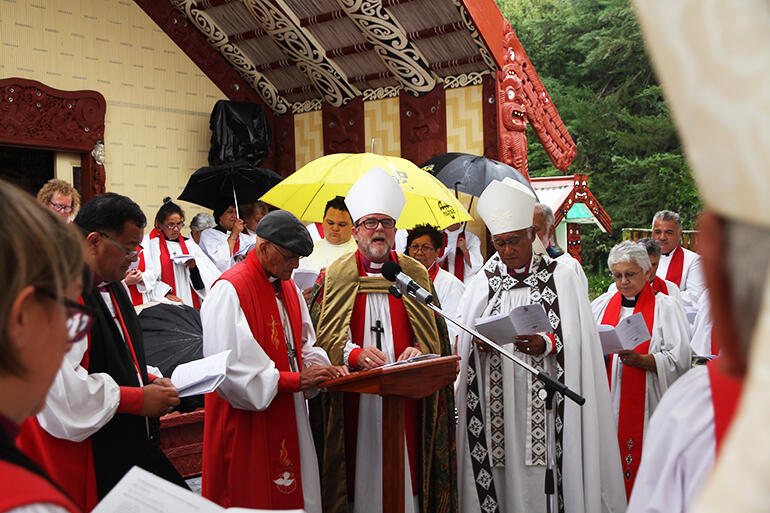 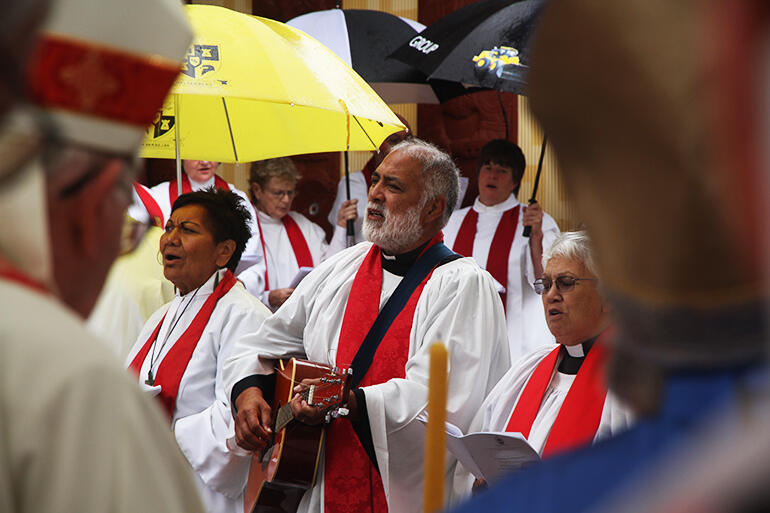 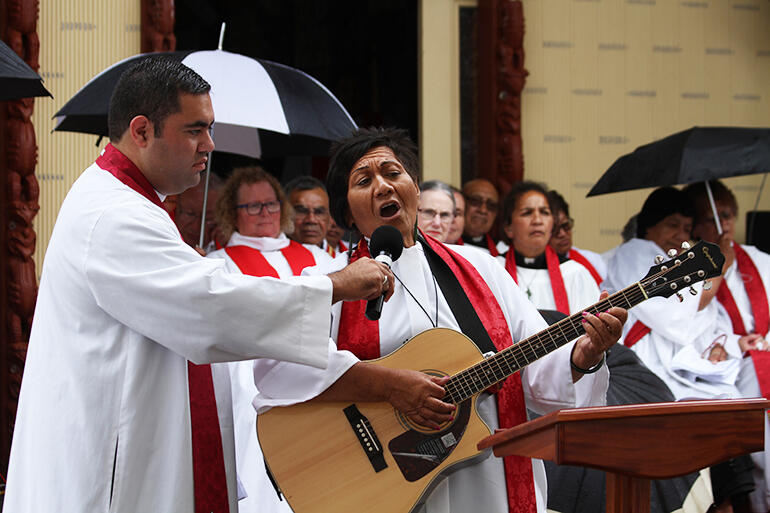 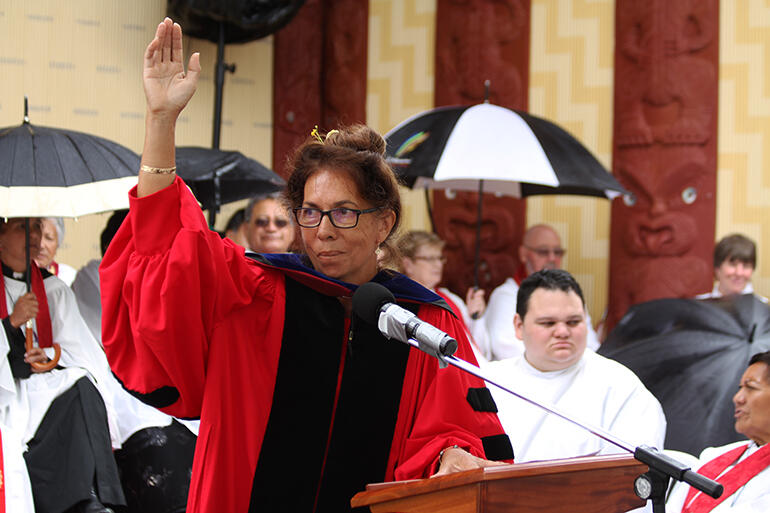 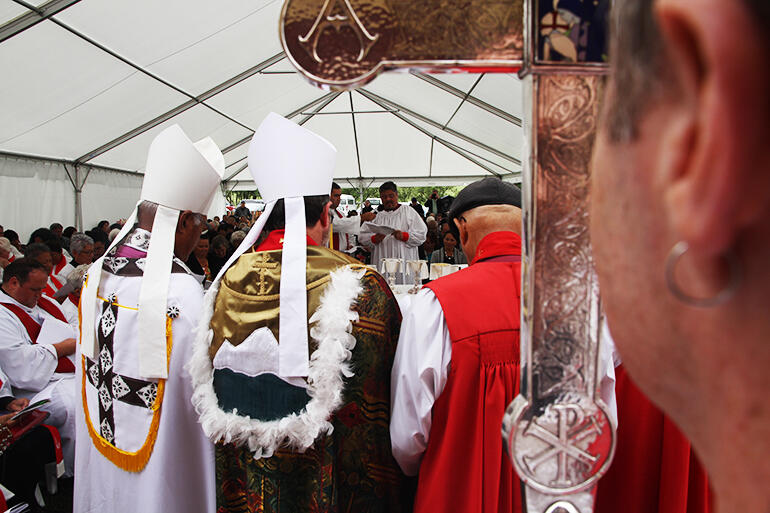 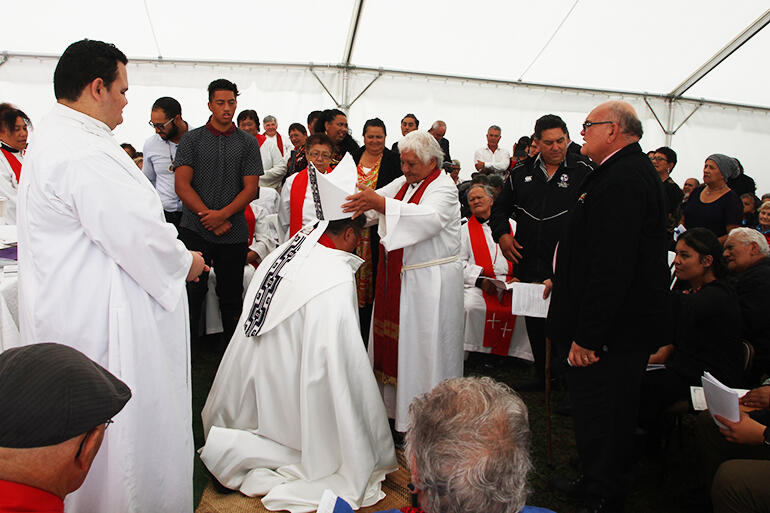 ‘Let us go, you and I, and return to Waiapu, to the sacred rain cloak that covers us all.’

More than 600 people battled their way through once-in-a-generation rain – it hadn't bucketed down like this since Cyclone Bola in March 1988 – on Saturday to tautoko the ordination of Don Tamihere as a bishop, and to see him installed as the next Pihopa o Te Tairawhiti.

When the travellors got to Ruatoria, which is 130km north of Gisborne, they still had to face the gnarliest stretch of all, a dozen kilometres on a slippery clay road that runs along the banks of the Waiapu River.

That chalk road became distinctly heart-in-the-mouth where it begins to climb steeply up the spur that separates Ruatoria from Porourangi, the wharenui which is the mothership of Ngati Porou, and which is where Bishop Don’s elders chose for his ordination and installation.

“Any number of people,” said Bishop Don, “would have insisted that this place is not a practical venue.

And as Archbishop Philip Richardson later remarked, there probably wasn’t a soul who wasn’t profoundly glad they’d made that Saturday hikoi.

“I had an overwhelming sense of Tairawhiti, both in terms of the church and tribally, coming together around Don and saying: ‘This is who we want to be at the centre of our life and development for the next season’.

Their joy, he said, was all the more distinct “given how deep their grief was at the loss of Archbishop Brown[3].”

Archbishop Winston Halapua later imagined that an ordinary person might have said: “What an awful, rainy day.

“But to a person of the whenua… that rain symbolises something deep.”

Archbishop Winston was the final speaker at the powhiri that preceded the service.

He deliberately walked to the gap between the wharenui and the marquee erected over the atea, and  spoke of the rain as roimata, or tears, that fell first for the loss of Archbishop Brown – and secondly as the tears that tumble when the labour is over, and new birth has come.

The powhiri started at 10:30am, and the service was scheduled to start at 11am, with the hakari, or celebration feast, predicted to begin 2pm-ish.

Well, timing is elastic in Te Ao Maori, and it was nearer 4pm when people moved towards the wharekai.

The welcome went on much longer than 30 minutes, of course, and then there was the service itself, which was punctuated by himene and waiata – and that was before the gift-giving had kicked in.

One of the innovations about this ordination service was the ditching of the kauhau, or conventional sermon, and the replacing of that with five reflections.

First up was the Rev Pane Kawhia, direct descendant of one of the first four Ngati Porou evangelists, and an evangelist herself – as well as an outstanding gospel singer.

Then there was the Rev Numia Tomoana, who hails from Kahungunu, and who established a ‘gospel weaving group’ whose members made the stoles for Bishop Don’s ordination.

“Don,” she said, “You have the nature and heart of increase. You are inclusive, loving, and draw people to you. As Pihopa hou[4], our amorangi, and therefore our hahi and our iwi, will be strengthened.”

Hirini spoke, he said, as Don’s friend – but confessed he was sometimes intimidated by him.

“Don is, I think, one of the greatest intellects our hahi has ever produced.

“Our hahi has a tradition of priest scholars. We’ve had scholars who have both ministered the Word, and interpreted the Word in a way that relates to our matauranga[5].

“That’s harder than it seems, and is a never-ending challenge. Reconciling (the two) in a way that works for us, and gives life. He is in that tradition.”

He also said he was in awe of Don’s whakapapa “to this valley, this marae, and this church” and in awe of his whakapono, or faith.

“But most of all, I’m in awe of my friend’s friendship.”

Hirini said Don and his wife Kisa had always been there “for the big moments in our whanau”, and had caused him to reflect on the nature of friendship.

“Friendship is the building up layers of love for your neighbour. Adding to them. Constantly building…

“What is whanaungatanga[6], after all? It’s love, built up over generations.”

Dr Jenny Te Paa Daniel, the former Ahorangi of St Johns College, spoke next, and she began by asking for a show of hands – she was looking for those who, like her, had been at the 1992 General Synod in Hamilton when the new three tikanga constitution became a reality, and “Te Hahi Mihinare… was about to be reborn with… wide open future possibilities.

“Bishop Hui, the feisty, no-nonsense and yet deeply compassionate bishop, said to me: ‘I want you to go to St John’s College to help us train the next generation of Maori priests and leaders – and I want them to be younger, smarter, deeply faith-filled and deeply Maori.”

Jenny paid tribute to the kaumatua and kuia priests who had guided and served with her at St John’s College – which is where a “young, faith-filled, deeply Mihinare, deeply Maori, Donald Tamihere entered in 1997 with his beautiful wife Kisa…”

Don and a small number of other Maori students had flourished there, she said.

“Their ministries since attest to the strength of their priestly character, for they like you, Donald, have chosen (as Michelle Obama so eloquently urges) to take the high road when others have chosen to ‘go low’.

“You have… chosen to exemplify faithfulness in God, faith in yourself and faith in the power of hard work.”

Finally, the Ngati Porou rangatira Selwyn Parata spoke of whakapapa – the genealogy that Don represents, the converging lines of tupuna who would have been proud to see that day, and on whose shoulders the new bishop is proud to stand.

Having invoked the Holy Spirit, the assembled bishops laid hands on Don and ordained him to the episcopacy.

The next stanza of the service was Te Whakamihi, or the Recognition – in which the new bishop was gifted with his episcopal vestments, a pectoral cross, stoles, episcopal ring, cope and mitre, and crozier.

Bishop Don’s crozier is eye-catching – it’s a tall one, designed by Derek Lardelli, with a stylised hook at the top, which speaks of Tairawhiti as people of Maui, who hauled Te Ika-a-Maui (the North Island) from the sea – and which recognises Christ’s call to his followers to be fishers of people.

There were other gifts, too, among them some family treasures – including a framed portrait of the late Archbishop Brown presented by his widow, whaea Mihi, on behalf of the Turei whanau.

And then there was the ‘other’ Tamihere clan, the one led by former MP, broadcaster and urban Maori leader John Tamihere.

John’s nephew Regan Tamihere spoke for their branch of the Tamihere whanau – and gifted Don with a taonga held for generations in the other side of the whanau: their tupuna-priest’s Bible.

Later, John reflected on the significance of what he’d seen take place on Saturday.

“If you score a try, then the whole tribe scores a try.

“So yesterday, Don scored a try – and the whole tribe celebrated.”

In the normal course of events, bishops are ordained in cathedrals – and then installed, by that particular cathedral’s dean, into the cathedra,or bishop’s chair.

Well, that’s not how they did things at Porourangi.

The Rev Canon Morehu Te Maro just led Bishop Don to a slightly flasher wooden chair plonked in the middle of the marquee, surrounded by the hired plastic chairs.

But as far as the Rev Chris Huriwai is concerned, that moment couldn’t have been more meaningful.

“Because in that act, I saw Bishop Don coming into the fullness of his whakapapa.”

The new bishop’s whanau and whakapono lines, he explained, “both converge in this place, and are represented by this place.”

Canon Te Maro is one of Bishop Don’s “Papa’s” – both in terms of his family lineage, and in terms of faith.

Secondly, Bishop Don was being installed into the whenua, into the atea – the court in front of the wharenui – “which is the place where our people have always looked to for preaching and for teaching.”

Ultimately, says Chris, “he was being installed into his people”:

Welcome, Bishop. This is your home. We are your people.

“We were joking with one another beforehand: All this rain… this is why we need cathedrals!

“But actually, we wouldn’t want to have this anywhere else. Rain and everything.

[1] Ngāti Porou derive their name from their ancestor Porourangi.

[2] Sir Apirana Ngata and Ropata Wahawaha are buried at the edge of Puputa maunga, 80 metres above the wharenui. Sir Apirana, who led a Maori cultural, economic and political renaissance in the first half of the twentieth century, was also a founding father of Te Pihopatanga o Aotearoa. His tipuna, Ropata Wahawaha, was a Ngati Porou chief, general and Anglican leader.

Great coverage of an incredible celebratory occasion for our #PihopaHou. Rev Christopher Huriwai played an Awesome role of leading the Service and I love his summation at the end of this article. Nga mihi nui.