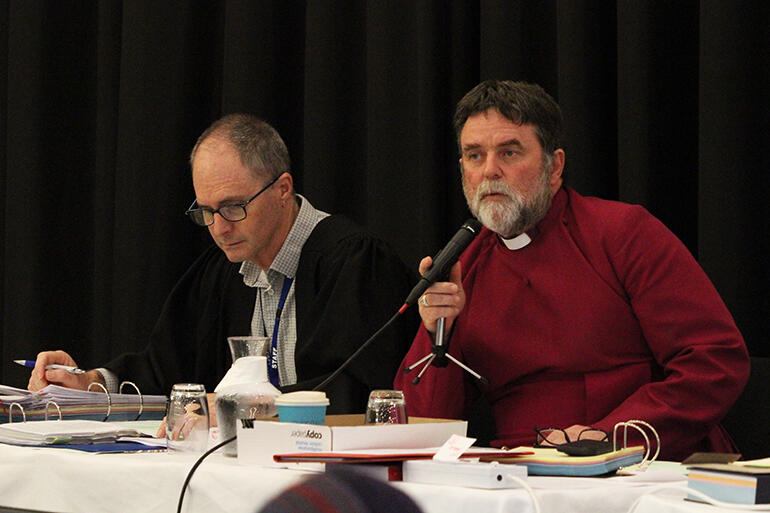 The Anglican Church this morning has paved the way for the blessing of same gender relationships.

At 11:20am, by majority vote, General Synod/Te Hinota Whanui passed Motion No 7 – which is the motion which accepts the report and recommendations of the Motion 29 small working group.

That acceptance is subject to the appointment of a select committee which will consider and report back to General Synod – before it finishes today – on a range of detail which must be sorted by Synod before the passage of the constitutional and canonical changes needed to give the decision effect.

The decision, nonetheless, is clear – after almost 50 years of debate about human sexuality, the Anglican Church has created a pathway for the blessing of same-gender couples.

There was no further discussion this morning about the principles at stake.

That debate was held late yesterday afternoon – and the convenor of the Motion 29 Small Working Group, the Rev Katene Eruera, waived his right as mover of the motion to respond to yesterday's discussion.

The better part of two hours, however, was spent in a discussion about the process of voting.

Last evening, a member of synod called for a caucus by tikanga to consider assent to the proposition.

This church's canons have an in-built mechanism to allow any one tikanga to veto a proposal before the house.

The three tikanga caucused for some time, and decided among themselves as to whether they would assent to the motion being put to the vote.

Each of the three tikanga assented to the vote being taken – and then by voices, the motion was carried.

The Rev Al Drye from Christchurch then called for a show of hands, then for synod representatives to stand – and these visibly confirmed that the motion, by a big majority, had been passed.

By contrast to General Synod 2016, when the Way Forward report and its recommendations were shelved, the reaction to today's decision was, after a brief burst of applause, quite muted.

That quietness reflected sadness, perhaps, that despite the best efforts of the Motion 29 working group, some have said they can no longer stay in the Anglican Church of Aotearoa, New Zealand and Polynesia.

The select committee (as noted at the beginning of this story) completed its work on Wednesday afternoon and reported back to the synod. It proposed a number of changes to the draft bills which make changes to the canons and constitution necessary to give effect to the Motion 7 resolution.

General Synod then spent its evening session in committee, working through each of these bills (20 to 24) clause by clause.

Further minor amendments were made to a couple of the bills – and then all were passed by synod. Their confirmation has been set down as an order of the day for Thursday.

The bills in question make the following changes:

Bill No 20 amends Title D Canon 1 and Title D Canon 11 to provide "immunity from complaint and discipline" for clergy who agree – or don't agree – to bless same sex relationships. Likewise, it protects bishops who authorise (or refuse to authorise) those services of blessing.

Bill No 21 amends Title G Canon XIV "to create a framework to allow for individual clergy to be authorised to conduct services blessing same sex relationships."

Bill No 22 enacts Title B Canon XXXVIII "to provide for the recognition of Christian Communities and for the affiliation of Ministry units with them."

Bill No 23 amends Title A, Canon1, Title A Canon II and TitleB Canon XXI so that "the forms of declaration of adherence and submission" set out there are consistent with those set out in the Constitution/Te Pouhere.

Bill 24 also includes the wording of a pledge for a priest or office holder to resign immediately from that office if called upon to do so by those acting under the authority of the Constitution or the Code of Canons "or any regulations made pursuant to them."

Anglican churches in Polynesia will not change their practices in this matter, as explained here.

I am disappointed in the outcome of this decision as it is a move away from believing in what the scriptures have to say.The scriptures clearly say that homosexuality and lesbiansim is a sin and now you want to say to sinners we want to bless you carry on living the way you want Gods happy with that.Yet it isnt from God at all it is just the words of man and that is both hippocritical and doubled minded as it says in the scriptures a double minded man is unstable in all its ways What has happened to the gospel of Christ the Church used to preach .That we are all sinners and that to be saved we must turn from sin and follow jesus christ with all our heart mind and strength an love others as ourselves.With your current stand you dont have a message worthy to preach if you continue to love the sin and the sinner.

There is one critical issue that is not being openly discussed by anyone involved and the Bishops have kept silent about. The issue came out during the 2013 Human Rights trial, and the Bishops were all there, against the Bishop of Auckland was that NZ law (in line with UN law) forbids people to speak out about sinful behaviours if it is outside of their church’s specific laws and teachings. This motion 7 mandates acceptance of LGBTQi+furryEtc behaviours as normal within the church’s teachings and doctrines, which now sets legal precedent for prosecution of those both speaking out against this behaviour, AND against those who teach of exclusive heterosexual biblical marriage (because it denies LGBTQi+furryEtc equality).
https://www.facebook.com/Xianity666/photos/a.1828501530494378.1073741828.612764478734762/1922015294476334