The long-awaited report of the Ma Whea? Commission into the question of same-gender blessings and ordinations has been released.
• 10 options listed for synod debate
• Precis of Doctrine Commission report 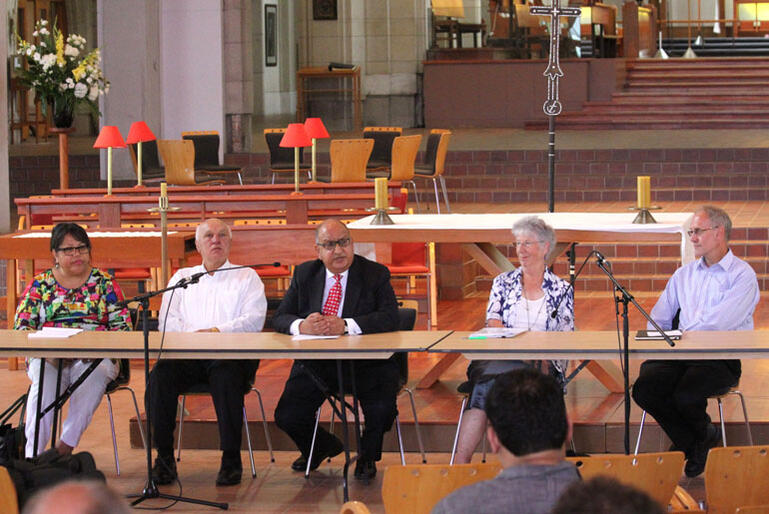 The long-awaited report of the Ma Whea? Commission into the question of same-gender blessings and ordinations has been released.

The report, which is the fruit of 15 months’ work by five eminent New Zealand citizens, lists 10 options to inform the General Synod debate at Waitangi next month.

The options range from a more conservative statement about who can be blessed and ordained (ie a firmer statement than the canons now prescribe) through various degrees of change and liberalisation.

Option I: Anglican Church to Add a New Rite of Blessing by Priests of Those in a Same Sex Relationship.

Option J: Adopt a Two Year Period of Focussed Discussion within Church Communities with a View to Making a Decision in (say) 2016

(These options are unpacked in a precis here. The unedited options can be read in the Ma Whea? Commission report, which can be downloaded below. The list of options begins on P38.)

It is also important to note that none of these pathways is recommended – because in the words of Michael Hughes, this church’s General Secretary, “that is rightly a decision for the General Synod/Te Hinota Whanui to make.”

The Ma Whea? Commission (full title: Ma Whea?:Mei Fe Ki Fe?: Where To? Anglican General Synod Commission on same gender blessings and ordinations) was chaired by Sir Anand Satyanand, a lawyer who served as judge and ombudsman before being appointed as New Zealand’s 19th Governor General.

The Ma Whea? Commission report summarises 199 submissions on the ordination and blessing of people in same-sex relationships.

It summarises the biblical and theological work done by our church from the missiological, doctrinal, canonical, cultural and pastoral points of view. And in the light of Anglican ecclesiology, it considers ways forward.

The Ma Whea? report contains a number of appendices – including another significant and long-awaited piece of work, the report of the Commission on Doctrine and Theological Questions.

This Commission was asked by the General Synod Standing Committee to look into the theological rationale for the possible blessing and marriage of people in permanent, faithful same-gender relationships.

“This report,” says Michael Hughes, “contains a full and robust theological rationale to support such blessings and marriages – and a thorough and equally robust assessment of that rationale, including a rebuttal of certain aspects.”

It does not recommend a position of this church on these matters. That too, says Michael Hughes, “is rightly the responsibility of the General Synod/Te Hinota Whanui.”

(A precis of the Doctrine Commission report can be read here. The full report begins on P62 of the appendices to the Ma Whea? report.)

The Ma Whea? Commission was set up before the New Zealand Parliament passed its marriage equality legislation, and the Commission’s terms of reference were not changed to take account of that.

The Doctrine Commission, on the other hand, did its work in the wake of the law change, and it considers a theological rationale for the marriage of people in permanent, faithful same-gender relationships.

The Doctrine Commission's full report can be downloaded below:

The GSSC commends both the Ma Whea? and Doctrine Commission reports to the church for prayerful consideration and discussion.

And through its General Secretary it has expressed “its deep gratitude to the members of both Commissions, for the extensive work they have undertaken to produce these two careful and comprehensive pieces of scholarship, which deserve to have profound and far-reaching impact on the life of the church.”

The Catholic and Apostolic Church that was founded by Christ, Matt.16:18, and served by the Apostles and early church fathers as recorded in the Book of Acts calls mankind to define themselves by their relationship to their saviour Christ. Perhaps it is now time for all the modern liberalists who wish to define themselves outside of this doctrine should be like the rest of the modern world and move on too.
Contrary to Rosemary's comments, the church has no desire to throw the "gays" out but like the rest us, their inclusion is contingent upon keeping His commandments John 14:15.
Those attending the General Synod at Waitangi in May would do well to remember that the church and doctrine belong to Christ and not to man and that it is our duty to live in His church for Him and through Him.

Sigh - is any of this news? As one friend said we could have come up with this list on the back of an envelope over a drink.

I feel a little sorry for the Commission, the Church handed them a hot potato, because they could not come up with a solution themselves. And now it is back in the Church's hands.

For God's sake make a decision! We are so over this, much of the world has moved on, and can not believe we are still debating this.

If the Church decides to kick gays out, then do it, put us out of our misery. Show your true colours.