Brother Matthew of the Taizé Community has challenged Aotearoa New Zealand churches to launch a renewal of young leaders who can ‘come and see’ the Community and experience its life of reconciliation and hope at Taizé in France. 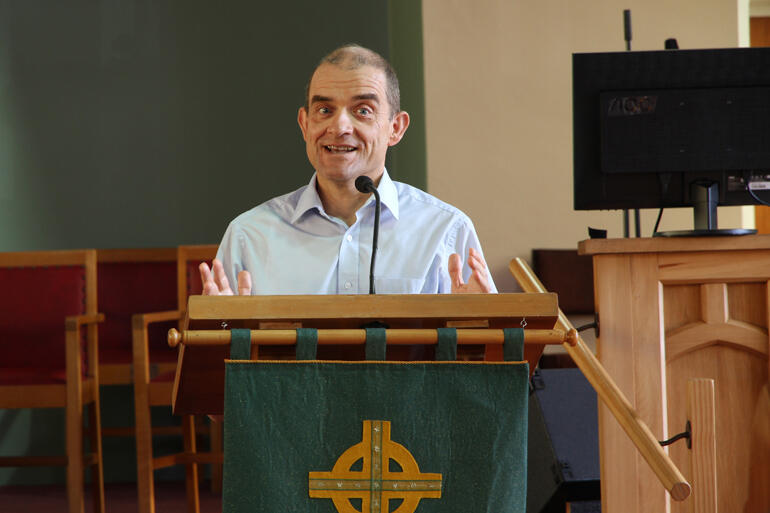 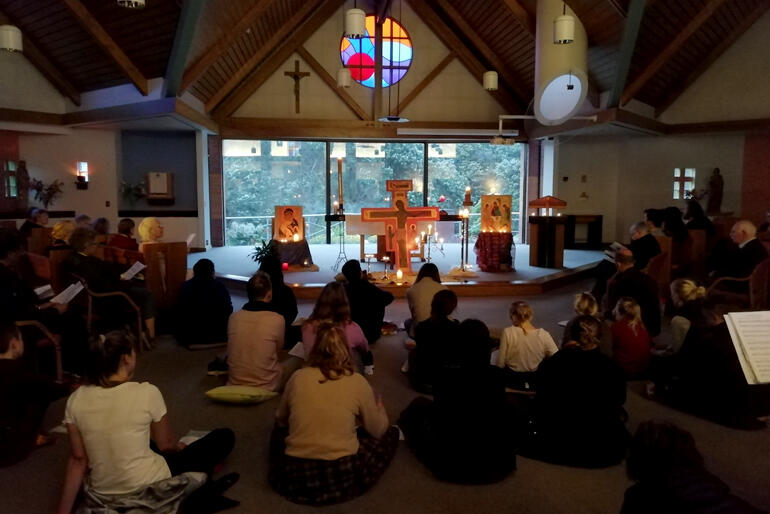 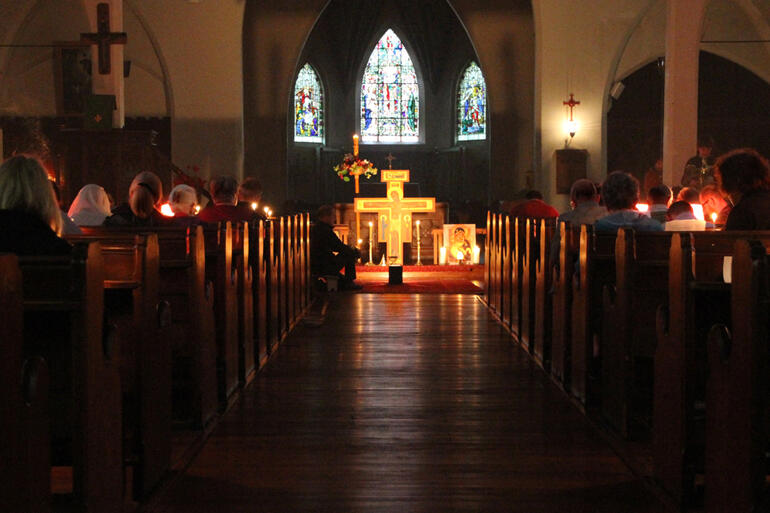 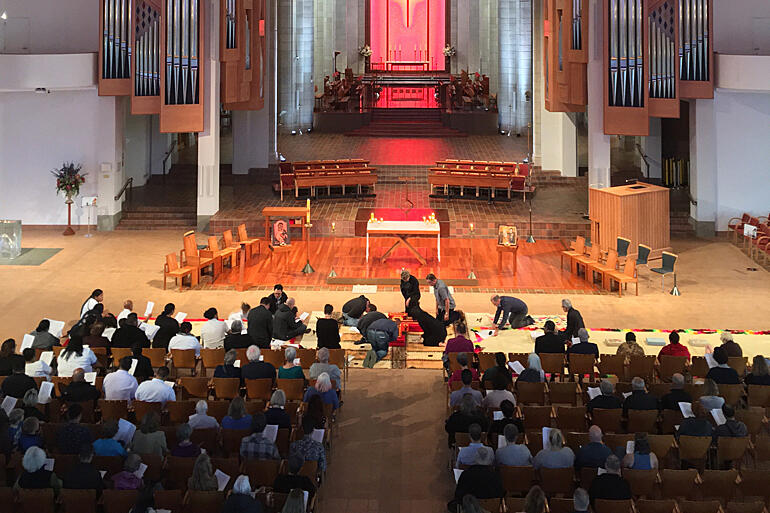 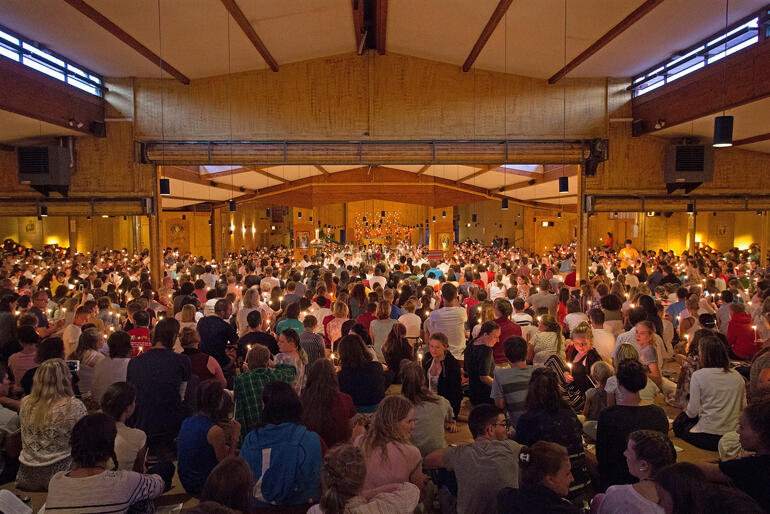 Brother Matthew of Taizé has issued an invitation to young adults from the south Pacific to ‘come and see’ the Taizé Community to study, pray and bring back a spark of renewal, hope and hospitality to their churches.

Eunice Hiew(28) felt some of that renewal as she took part in the Bible study and worship in the style of Taizé at Holy Trinity Cathedral in Auckland this November,

“Brother Matthew's preaching and questions were light in darkness. They were both convicting, for example when he said, "An authentic witness always points elsewhere, not to themselves," and also comforting, "Perhaps important first of all to think about how Christ welcomes each of us."

“My heart came away reminded and refreshed.”

Brother Matthew met with Christian young adults and worshippers in the style of Taizé in Wellington, Auckland and Dunedin this 15-20 November.

Around 500 people turned out to meet Brother Matthew over the three cities, to pray in the style of Taizé, learn new songs (including four songs newly translated into Te Reo Māori by Rauhina Scott-Fyfe from the Ōlelo Hawaiʻi versions) and to hear Brother Matthew speak on the Taizé Community’s 2019 theme of hospitality.

Tom McAlpine (30) attended the Taizé prayer in Dunedin, and appreciated the change from other youth-focused worship he has experienced,

“In a lot of churches it is all about fitting into the group – and being stuck in a box – but in Taizé worship there’s more room to be an individual. There’s a lot less dogma and telling you what you need to believe. I think it is good for anyone to meditate and find a peaceful space and to socialise with some good people.”

Brother Matthew talked about the challenge of offering that same openness, peace and hospitality to all – but especially to the poor,

“Hospitality is not just creating a cozy atmosphere we can choose to invite somebody into.” he said. “It is about being open and ready to offer hospitality wherever there is need.”

Br Matthew also cautioned that as Christians we cannot expect to give ‘everything’ and ‘at all times,’

“Sometimes that desire to offer hospitality can throw us into a kind of activism that overwhelms us,” he said.

“But when we speak of hospitality, we must also come to know the hospitality that Jesus offers us –  because that is the source from where all our hospitality flows.”

In Wellington, Brother Matthew led a weekend retreat for around 100 people, half of whom came from Anglican churches and through Victoria University chaplaincies. They looked into the theme of hospitality alongside the sisters and worshipping community at the Home of Compassion in Island Bay as they celebrated 30 years of prayer in the style of Taizé.

Later in downtown Wellington Brother Matthew met with volunteers at Compassion House soup kitchen, which serves homeless people in the Wellington CBD, and he led another 75 people in prayer and Bible study at St Peter’s Anglican Church on Willis Street.

Also in Wellington Brother Matthew visited the Urban Vision-supported drop-in café in Nae Nae, where church members have built relationships in the community leading to the construction of much-needed new social housing.

In Auckland, Brother Matthew met with Anglican and Roman Catholic bishops, and Methodist leaders, and then later he led 180 people in prayer at Holy Trinity Cathedral Auckland, where they heard the words of Jesus read in English, Te Reo Māori, Samoan, Solomon Pijin and Tongan and studied the Bible together.

Grace Cox (24) from St Andrew’s Epsom likes that Taizé worship doesn’t try to be “hip and cool” for the youth. In the silence and the songs she finds her “thin space” where she feels connected to God as Creator, Redeemer and Giver of Life,

“It is a space where my logical brain stops, and my prayerful heart seems to take over … I find that the meditative space that it creates unites me with the others in the room, but also is me in my own bubble with God.”

“...It’s where the prayers on my heart that I can’t find the words for get given to God, and God's Spirit comes back to me.”

In Dunedin around 130 people joined Brother Matthew as he led prayers and Bible studies at three venues: Mosgiel Presbyterian Church, St Patrick’s Catholic Church were he met with church leaders including Bishop of Dunedin Steven Benford. Later he led evening prayer and preached at All Saints’ Anglican Church where readings were offered in Te Reo Māori, English, French and Mandarin.

From its humble beginnings offering hospitality to people fleeing the Second World War, the Taizé Community now welcomes tens of thousands of young adults each year to its home in rural France as they join for a week at a time in the simple life of study, work and thrice-daily prayer.

The Community’s simplified worship with songs based on a few lines of scripture grew out of a pastoral need to worship in a way that young people who spoke different languages and came from diverse church traditions could easily join in.

The Taizé community does not plant churches or encourage others to convert to their own movement, but instead encourages young people to follow a call to service within their own churches. This is part of the charism of Taizé which emphasises ‘désinteressement’ – living in a Christ-like way that is not motivated by self-interest.

Worshipping and studying the Bible together with young people on a large scale is a gift the brothers want to share with young Christians from the Pacific.

“Isolation is a problem for young Christians everywhere,” said Brother Matthew, who has accompanied young people from all around the globe.

“Often, in our churches if adults are present they will ask all the questions, and do all the talking, so the young people don’t get the chance to take the initiatives that they would take on their own.”

“Being amongst peers from so many different cultures, languages and kinds of church opens something in young people.”

“We don’t say ‘You must go out and be a sign of reconciliation’ But after this experience of friendship, of communion, of their place in the global body of believers their own age – that is what happens.”

For more information about Taizé prayer and music:

How to prepare a Taizé style worship service

For a list of churches in Aotearoa New Zealand that worship in the style of Taizé go here.