Archbishop John Dew of Wellington and Bishop Soane Patita Paini Mafi of Tonga are among new cardinals named by the Pope. 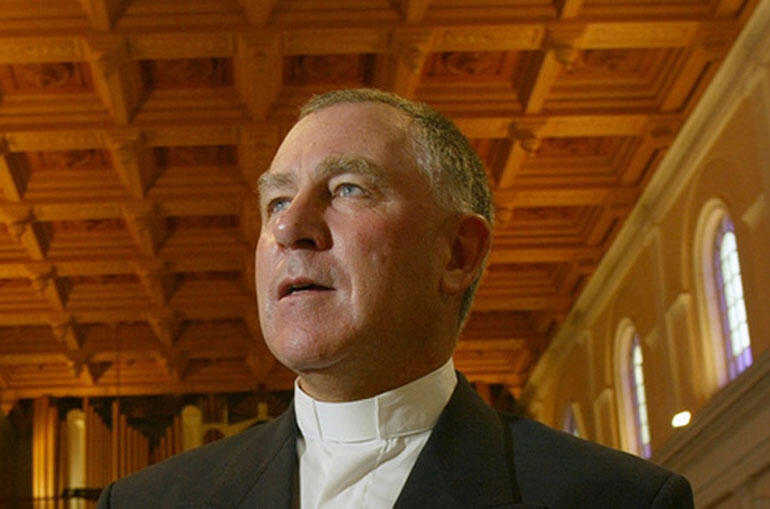 The head of the Catholic Church in New Zealand, Archbishop John Dew of Wellington, and Bishop Soane Patita Paini Mafi of Tonga are among new cardinals named by the Pope early this morning (NZT).

The Pontiff selected the 15 prelates from 14 nations, including far-flung corners of the world such as Cape Verde, Burma, Ethiopia, Thailand and Vietnam, to reflect the diversity of the church and its growth in places such as Asia and Africa.

Cardinal Dew was born in Waipawa, Hawkes Bay, in May 1948 and was educated at St Joseph's School, Waipukurau, and St Joseph's (now Chanel) College, Masterton, before starting his studies for the priesthood. He was ordained in May 1976, and was appointed Auxiliary Bishop of Wellington Archdiocese in 1995.

He succeeded Cardinal Tom Williams, ONZ, as Archbishop of Wellington in March 2005.

Referring to the Vatican, Pope Francis told the faithful in St Peter's Square that the new cardinals were "from every continent" and "show the indelible tie with the Church of Rome to churches in the world".

In addition to the 15 new cardinals who are under 80 and thus eligible to vote for the next Pope, Francis bestowed the honour on five other churchmen older than that who had distinguished themselves through their work in the Vatican bureaucracy and diplomatic service.

He also made another surprise announcement: that on February 12-13, he will lead a meeting of all cardinals to "reflect on the orientations and proposals for the reform of the Roman Curia", the Vatican's administrative bureaucracy.

Francis is using his papacy, which began in March 2013, to root out corruption, inefficiency and other problems in the curia.

No Americans or Canadians

The pope, who has undertaken a reform of the Vatican's administrative body known as the Curia, named only one cardinal from within it: Archbishop Dominique Mamberti, a Frenchman. He used to serve as the Vatican's foreign minister.

No American or Canadian cardinals were named, which Vatican spokesman Father Federico Lombardi said was because "their numbers are already consistent and remained stable."

Once these new members of the College of Cardinals are officially installed on February 14, there will be 228 members, including 125 who can vote in conclaves.

The new cardinals reflect a change in church demographics, which have shifted toward Africa, Latin America and Asia in the past century.

In 1910 about 65 per cent of the world's Catholics lived in Europe with 24 per cent in Latin America and the Caribbean, according to a 2010 study from American think tank Pew Research Center.

Despite the new nominations, the overwhelming number of cardinals named during this and the previous two papacies have been Europeans. Over the three papacies, 57 are from Europe, 19 from Latin America and 15 from Africa, 14 from Asia and three from the Pacific.