The Anglican Indigenous Network(AIN) meeting in Hawai’i this October has released a challenge to the wider Anglican Communion to actively advocate indigenous rights across the church and the world. 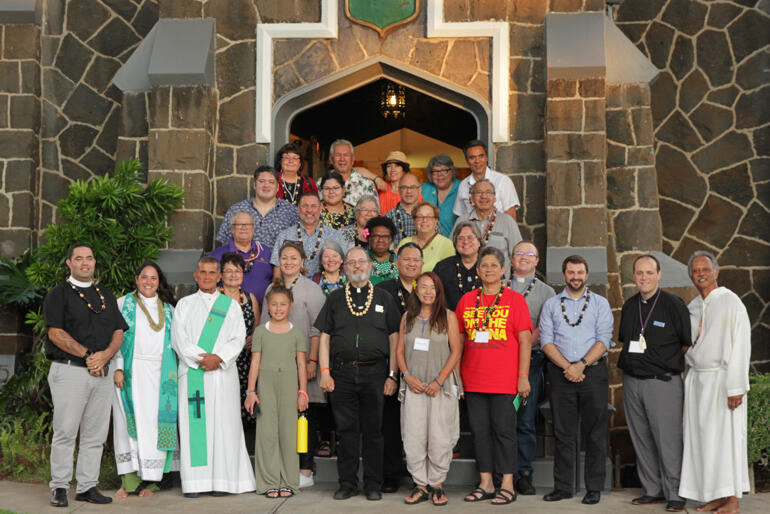 Ten Pīhopatanga o Aotearoa representatives joined the Anglican Indigenous Network meeting in Honolulu this October as they called for Communion-wide support for indigenous people’s rights and aspirations around the world.

The AIN challenge to the Communion came at the conclusion of the week-long programme where each indigenous delegation shared stories of struggle and hope in their ministries with indigenous communities, gathered around their shared experience of colonisation,

“Compelled by the Gospel’s power of love, renewal, peace, reconciliation, and restoration we support one another within our common challenge as minority peoples faced with the unique daily realities of the ongoing impact of colonialism... in the Church we love and in the world we are called to steward,” the AIN 2019 Communique reports.

AIN delegates reported how Anglican indigenous peoples continue to live and minister in the context of damage to communities resulting from past and present colonisation and its ongoing effects. A recurring theme was the need to enable indigenous communities to direct indigenous development, so that communities can foster their families’ wellbeing through indigenous cultural modes, including in education, justice and health.

Before moving to a broader call for Anglican Communion action, the AIN identified priorities for indigenous Anglican ministry and advocacy that included:

This action point came out of the common thread in AIN reports of high levels of exhaustion amongst indigenous clergy and lay ministers who care for people in communities coping with intergenerational trauma. This trauma results in poor indigenous mental and physical health, high suicide rates, prevalence of abuse and sexual abuse and violence, these all create pastoral needs that take a heavy toll on indigenous ministers.

•  Take genuine steps to address the climate emergency being faced right now by low lying island and coastal communities, not just in Australia, but throughout the world

This action point arose after Dr Rose Elu reported from the Torres Strait Islands how sea level rise is causing regular king tidal flooding, making it impossible to use some roads, airports and agricultural land. Arctic indigenous peoples from the USA and Canada reported that permafrost melt is damaging their peoples’ ability to survive according to traditional lifeways.

•  Anglicans are asked to stand with the National Aboriginal and Torres Strait Islander Anglican Council (NATSIAC) by endorsing The Statement from the Heart delivered at Uluru in 2017, and writing to and encouraging the Australian government and church to do likewise.

- 250 Aboriginal peoples have signed the 'Statement from the Heart' as a request for truth-telling about their experience of colonisation in a context where there is no existing treaty between the Australian state and all of the continent’s indigenous peoples.