'An ordeal of the most grievous kind'

Over the next 48 hours, the Anglican Missions Board and Diocese of Polynesia will formulate the next stages of their response to the destruction wreaked by Cyclone Winston on Fiji and Tonga.
Donate here: AMB Cyclone Winston Emergency Appeal 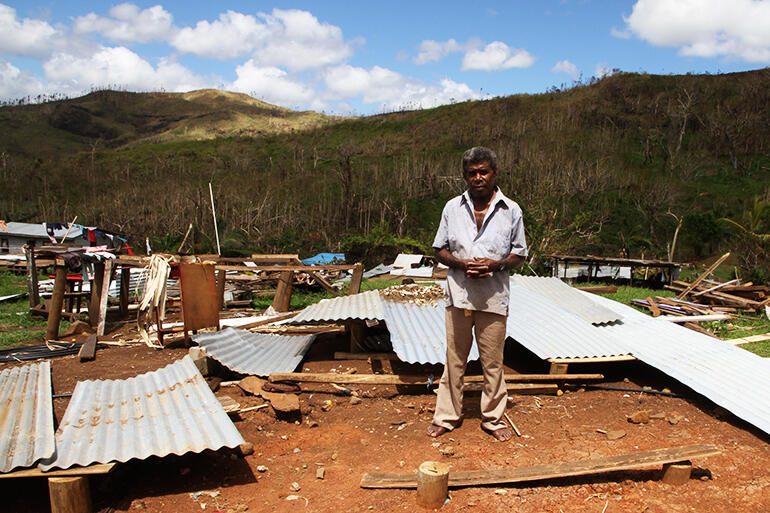 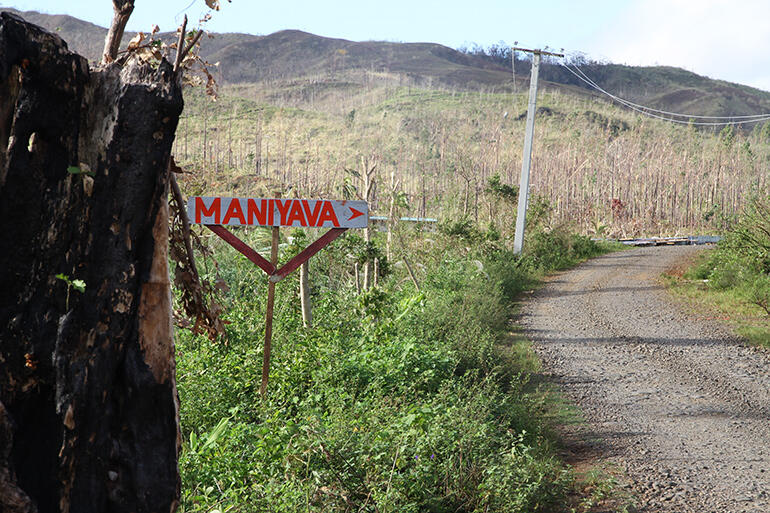 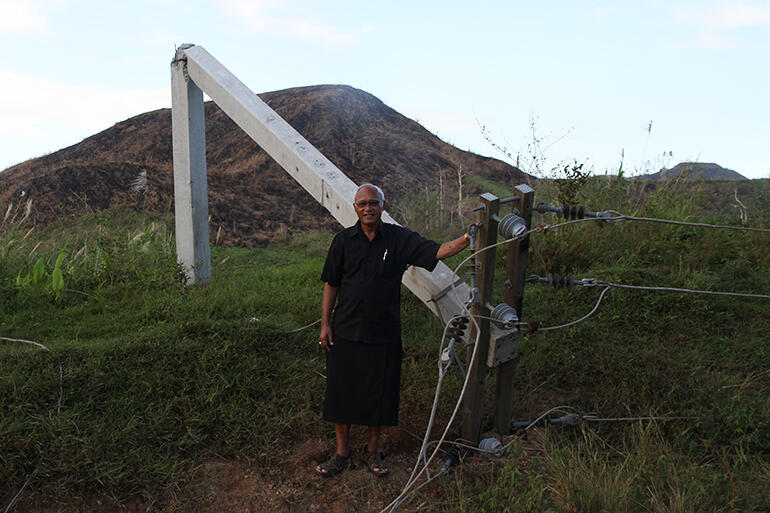 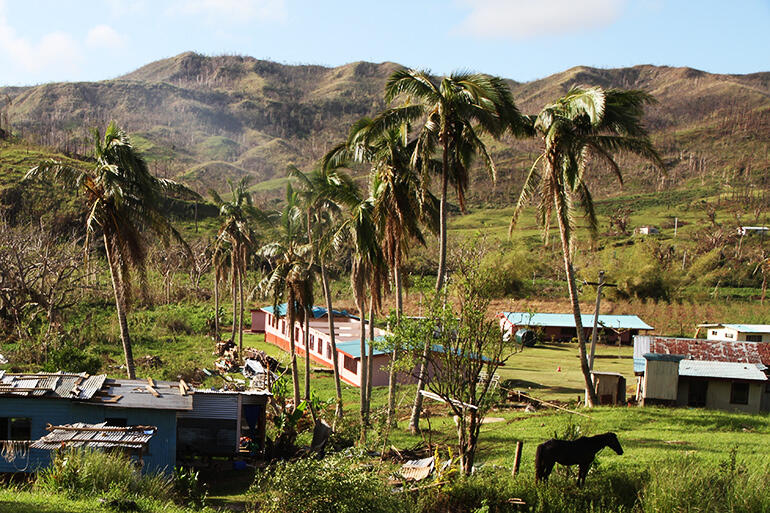 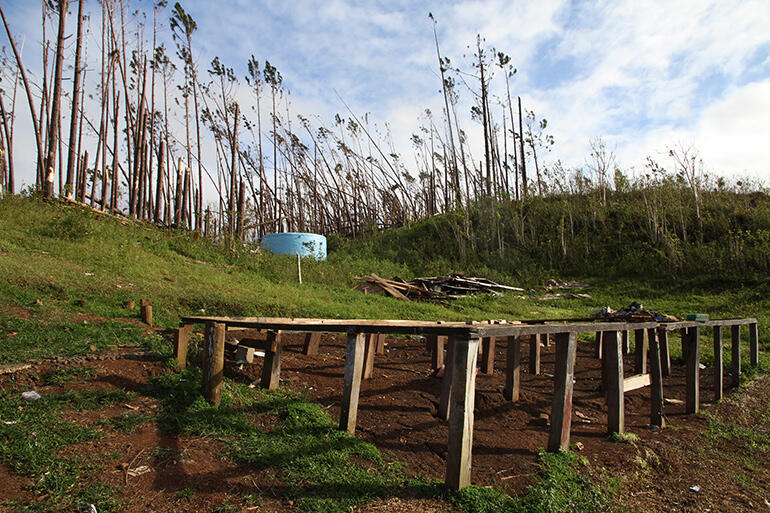 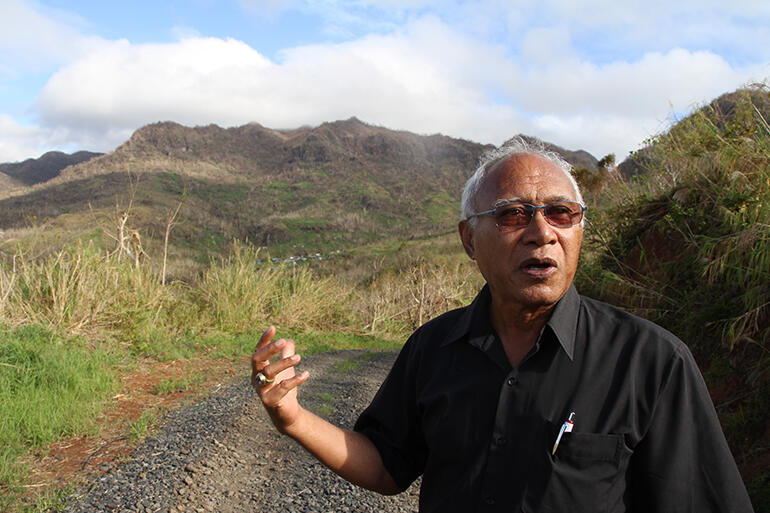 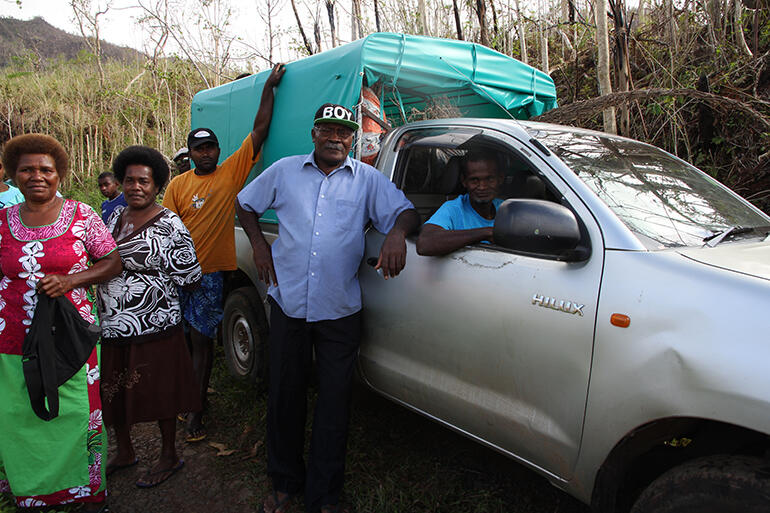 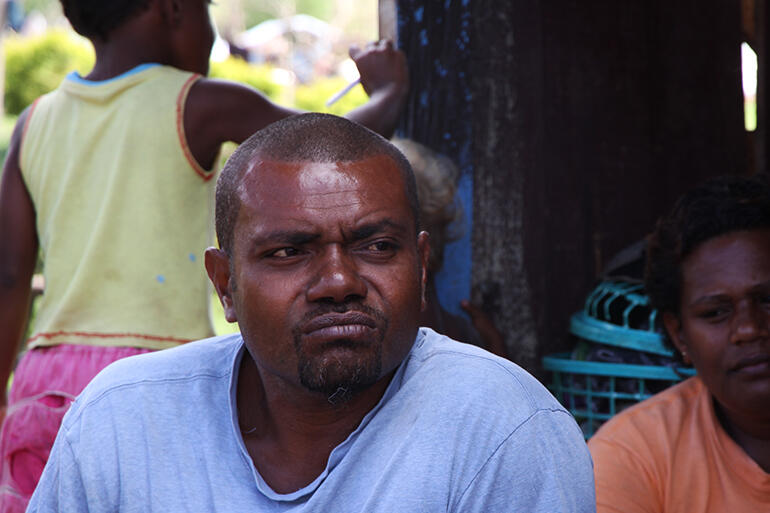 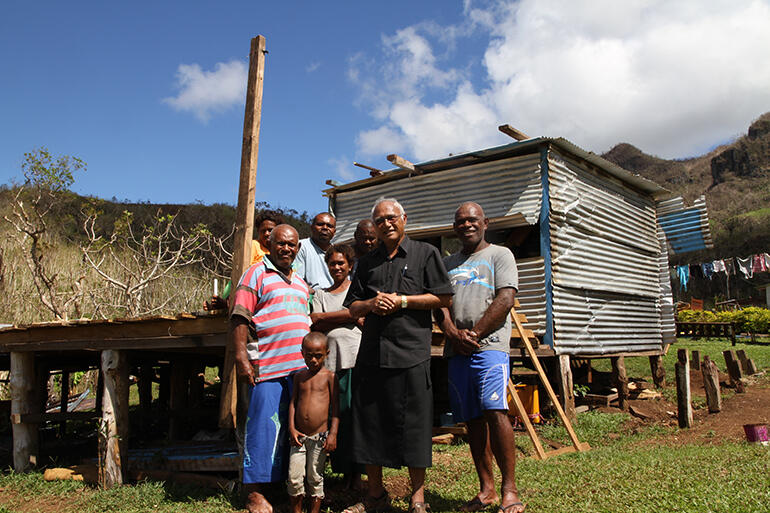 Well, lucky may not be quite the word to describe someone who lost his home – and most of what little else he owned – when Tropical Cyclone Winston rampaged through Fiji on February 20.

But Winston killed 44 Fijians, and it’s a wonder that Simione wasn’t the 45th.

Simione is one of 168 people who live in the remote Anglican village of Maniava[1]in the province of Ra, on Fiji’s main island of Viti Levu.

Maniava sits high on a hillside at the mouth of a valley, and on the night of February 20 the winds being funnelled up that valley were epic – meteorologists say Winston’s winds gusted up to 300km/h.

The winds had been building throughout the day, and at about 6pm Simione clustered his family around him in his simple corrugated iron home.

By now the howling wind was thick with flying foliage and timber – for hundreds of square kilometres the forests of northern Viti Levu have been stripped bare – and roofing iron was scything through the storm.

Simione’s simple castle was under siege. So he ordered his family to shelter under the house. One by one they struggled out against the bucking door and dived under the floor.

Simione was the last to leave – and as he fought desperately with the door the wind wrenched his home off its pilings, and hurled it end-over-end through the air before slamming it into the bank of stream, 50 metres away. With him still inside.

He was a man going over Niagara Falls in a barrel.

He was knocked cold. When he came to, Cyclone Winston was still roaring, and he crawled into a stream-bank cave.

By about 10pm Winston had moved on.

The people of Maniava, meanwhile, fanned out through bucketing rain to look for Simione. They found him at the mouth of the cave.

He spent the next night in hospital. Three weeks after his wild ride, his ankle and wrist ache, and he’s in shock about what happened – because of the 33 homes that once stood in Maniava, just four remain.

Mosese Kakaramu recently retired as the Turanga ni Koro - the village headman. He’s a man the people respect. They'd chosen him as their leader, and he took that task seriously.

He also lived in the largest, and only two-storeyed home in Maniava, and each Sunday the people would gather at his place for worship.

And because they're all Anglicans at Maniava, Archbishop Winston Halapua had several times celebrated the Eucharist with them in Mosese’s home.

On the night of the cyclone, when the wind force became really ominous, Mosese’s family decided to make a run to one of four sturdier government-built houses (they're the only ones to survive the carnage) about 50 metres away on the eastern slopes of the village.

But the winds were so fierce this fit young man couldn’t stand.

So he inched his way forward on his knees and elbows, commando-crawl fashion, cradling his young son in his arms.

Jesa made it to the government house, and he made it back again,too.

But the winds grew stronger still, and there was no way Jesa could survive a second trip.

So he and eight members of the family, Mosese among them, clambered under the floor of Mosese’s home.

Four hours later, when they emerged, there was nothing left standing above the floorboards.

The long search for security

The people of Maniava are ‘Solomoni’. They're descendants of Solomon Islanders ‘blackbirded’ from the beaches and villages of the Solomon Islands to work as virtual slaves on the cotton, copra and sugar plantations of Fiji.

To this day, Solomoni communities are at the bottom of Fiji’s social heap – they’re poor, and mostly landless, because almost all land in Fiji is tightly held by the mataqali,the native landowning clans.

So the Solomoni communities squat on unwanted land or, in the best case, they dwell on land legally secured by the church.

Sometimes, too, while they might not have legal title to their land, they are shown favour. That’s what happened at Maniava. About 20 years ago, the pioneers of Maniava moved there with the encouragement of the people of Ra province.

They started from scratch. They planted their crops, and they discovered that yaqona, the plant from which kava is extracted, grew well there.

Yaqona is a cash crop, and the yaqona they sold at the markets gave them the cash they needed to buy saws to mill the trees, and the hammers, nails, planes and corrugated iron they needed to build their homes.

But their means of making cash just went with the wind.

Because not only have their food crops been wiped out – the cassava, the yam, the taro and the vudi (bananas) – but so too has their yaqona plantation.

They are still taking yaqona they'd already harvested to market.

But yaqona planted now will take 36 months to mature.

So where will the dollars come from over the next three years?

Dreaming for their children

The people of Maniava dream better dreams for their children – and they’ve shown innovative ways to bring those dreams to pass.

The nearest school to Maniava is an hour’s trek along a 4WD track that can't be navigated during bad weather.

So with the help of the Anglican Missions Board they built a dormitory and toilet block just two minutes’ walk from the school.

Every Monday morning, the kids would troop off to school – with a mum and dad rostered to mind and cook for them in that dormitory – and that whole gang would return to Maniava after school on Friday.

That routine is in disarray now, too.

The people of Maniava are doing their best to get back on their feet.

But they do need help to do that.

Last week, Archbishop Winston Halapua, Anglican Missions Board Projects Officer Mike Hawke (who is the AMB’s trouble shooter in disaster zones) and Diocese of Polynesia Registrar John Simmons (who, in an earlier life, was a senior Fijian police officer who also served as a UN peacekeeper in Iraq and Liberia) visited Maniava.

They asked the community to draw up a progressive schedule of what they think they will need to survive, rebuild and become more resilient over the next two weeks, month, three months and six months and year.

The diocese will liaise with the Fiji government’s own disaster relief people to make sure there’s no duplication of efforts and supplies – and Archbishop Winston has pledged that they’ll be back within days with more rations, and with supplementary supplies, including fast growing seeds (kumara matures in three months) and building materials.

Meanwhile, Archbishop Winston has instructed all senior clergy and officers in the Diocese of Polynesia to put aside all their routine work for the next two months. He wants them to give 100 percent of their time and energy to responding to the needs of Fiji’s stricken communities.

And over the next 48 hours, in conjunction with Mike Hawke and the Anglican Missions Board in Wellington, they will formulate a detailed long-term church response plan.

Maniava may well be the most severely affected Anglican community in Fiji – but it’s not the only one.

On the evening of our visit to Maniava, for instance, we visited the Wainaloka and Wailailai settlements near Levuka, on the island of Ovalau.

Night had fallen by then – but our headlights still made plain the matchwood remains of the Wainaloka play centre, for example.

Archdeacon Henry Bull also reports significant, even catastrophic damage to communities on the eastern side of Fiji’s other main island, Vanua Levu, and on Taveuni Island, and he’s been reaching out to the Anglican settlements at Naviavia, Nabuniikadamu and Vucivuci.

This coming week he also intends to venture into areas which, since Winston struck, have been unreachable by road, and uncontactable by phone.

But of course, the Anglican story is but one piece of the Fijian puzzle.

Nearly 25,000 homes were damaged or destroyed by the cyclone, and about 350,000 people – that’s roughly 40 percent of Fiji's population – suffered serious loss of some sort.

Eighty percent of Fijians lost electric power, and getting power back to places like Maniava will take months – the lines are down, and the concrete power poles are snapped, for mile after mile.

The carnage is not restricted to Fiji either.

Cyclone Winston smacked Tonga twice within a few days, and 200 homes on the island of Vava’u are damaged, and 95 percent of the banana crop there has been destroyed.

In the days before Cyclone Winston hit Fiji, as it went on its crazy looping course around the Pacific, and then doubled back towards Fiji, Fijian Prime Minister Frank Bainimarama urged his fellow countrymen and women to prepare for the worst.

“As a nation,” he warned, “we are facing an ordeal of the most grievous kind.”

And as the cyclone began to tear his country apart, his plea was simple, but eloquent:

“Let us all pray for our nation, ourselves and each other.”

Perhaps it’s one that we, as members of the Anglican Church in Aotearoa, New Zealand and Polynesia, could reflect on as we consider our response to the victims of Cyclone Winston.