Fereimi Cama has been ordained as the next Bishop of Polynesia - and hence he is an Archbishop and joint leader of the three tikanga church. He is the first Fijian to be chosen to lead his diocese in its 110 year history.
• The Fiji Sun's report
• Archbishop Cama's story
• The ACNS report 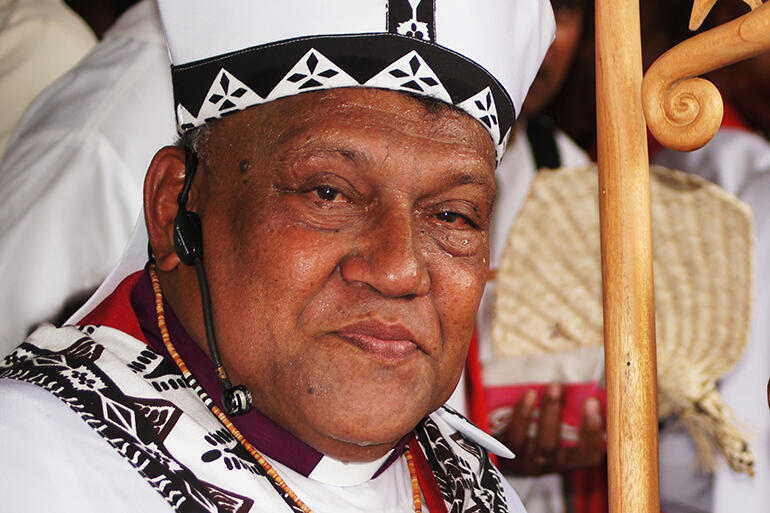 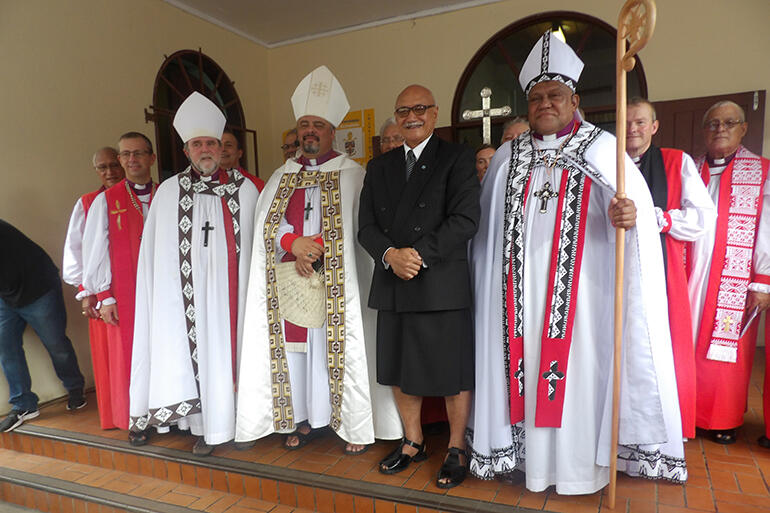 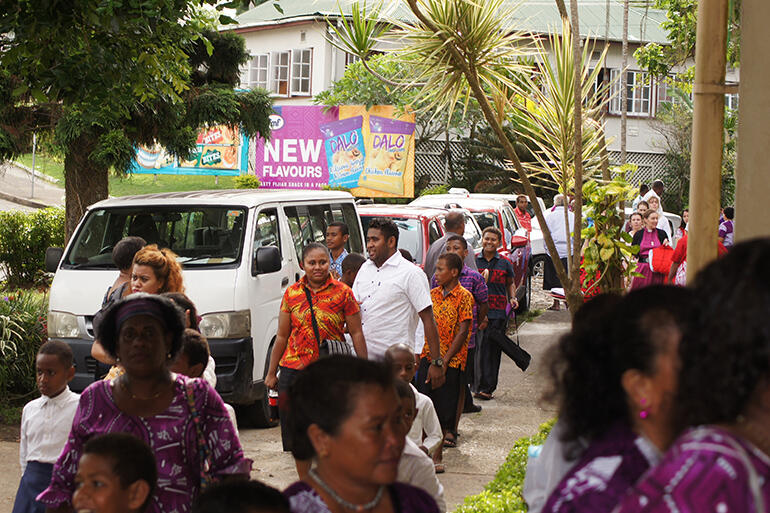 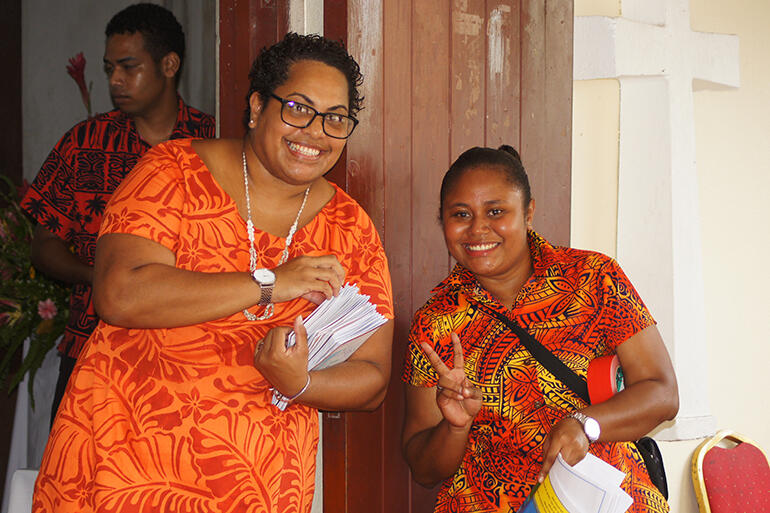 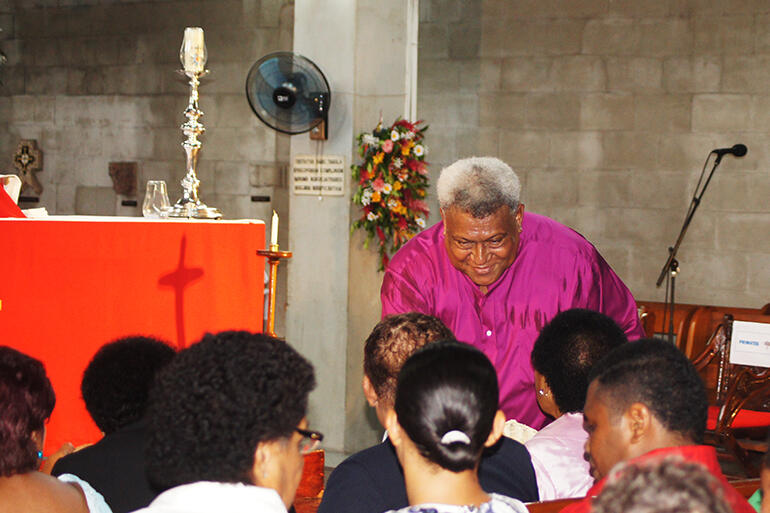 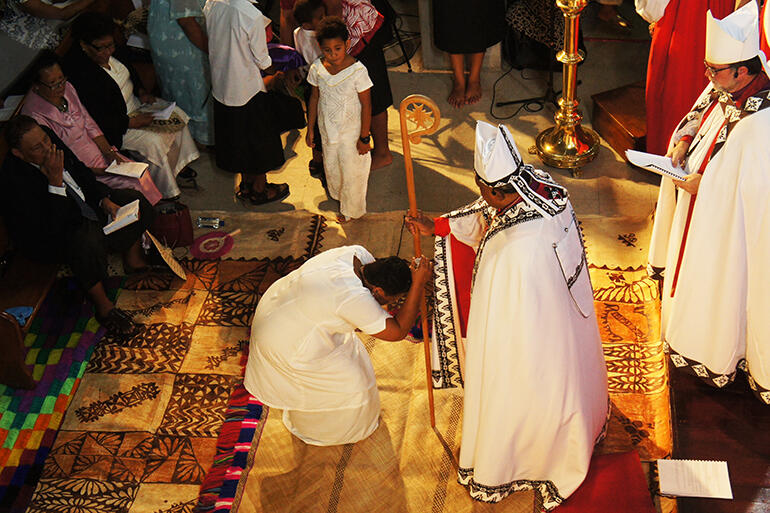 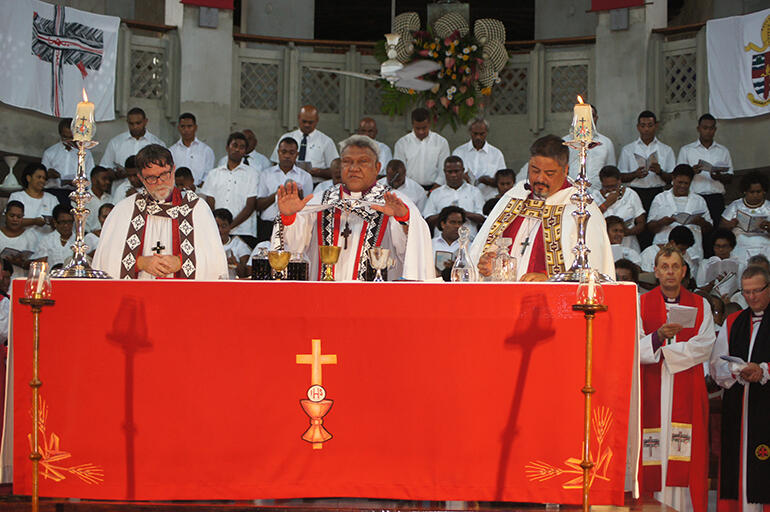 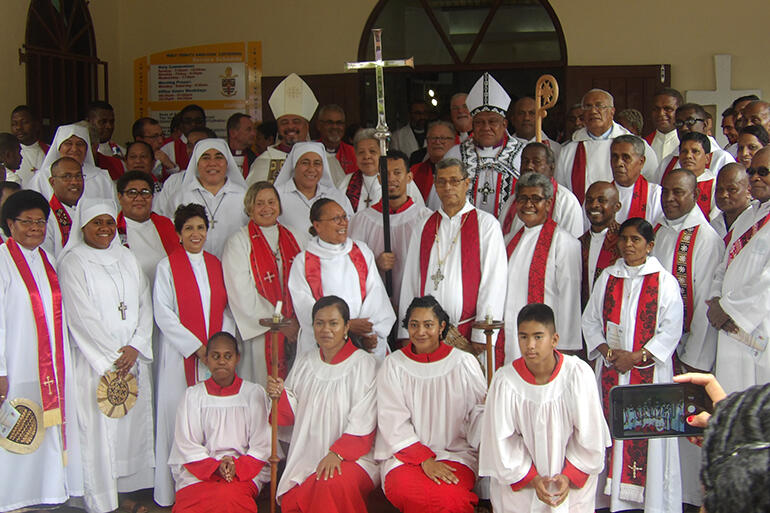 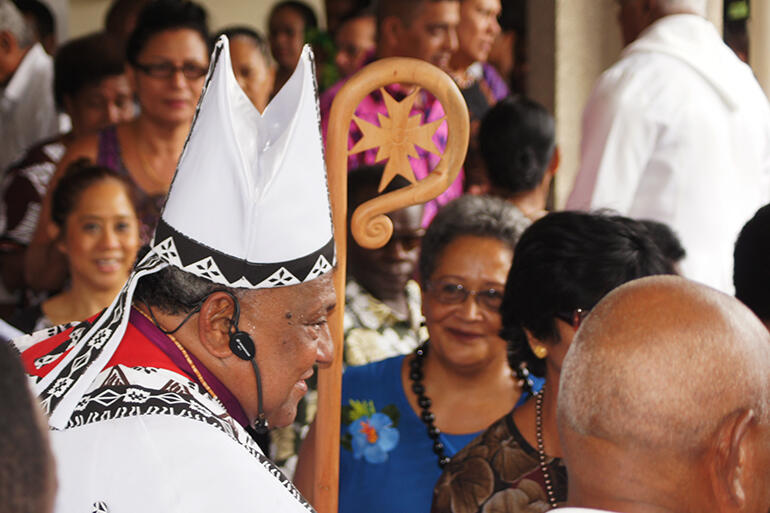 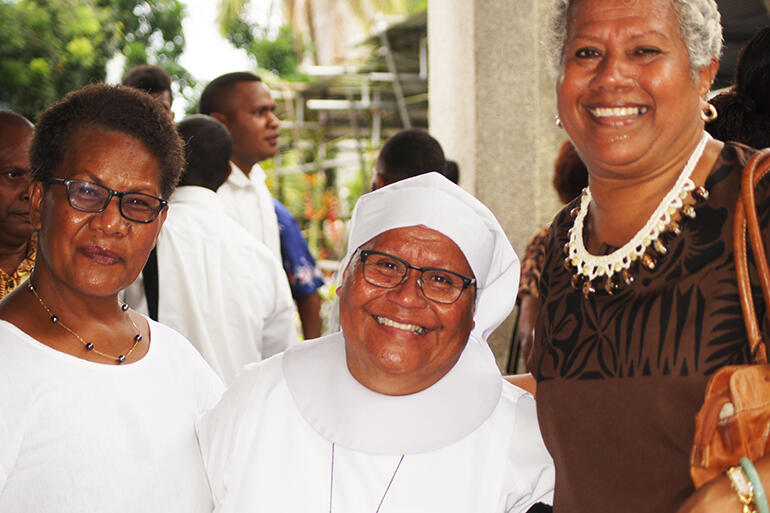 Perhaps 2000 people thronged into and around Suva's Holy Trinity Cathedral yesterday to witness the ordination of Fereimi Cama as the seventh Bishop of Polynesia – and to celebrate his consequent recognition as Archbishop and joint leader of the Anglican Church in these islands.

Hundreds wedged themselves into the cathedral itself, and onto into its broad verandas for the occasion – while a multitude watched the televised action in a shelter erected in the grounds of the cathedral. Still more craned to catch glimpses from beneath the frangipani trees and coconut palms that shade those grounds.

Well they might: Fereimi Cama – who had served as Dean of that cathedral from 1999 to 2012 – had returned to be ordained as the first I-Taukei, or ethnic Fijian leader of the Diocese of Polynesia in its 110 year history.

Fiji's Head of State, President Jioji Konrote, was on hand to witness Fereimi Cama's ordination, as was the Speaker of the Fijian Parliament, Ratu Epeli Nailatikau, who is himself the previous President. Both men's presence, no doubt, underlines the pride Fijians take in a native son's election, and perhaps the regard in which those leaders hold the Anglican Church.

Archbishop Don Tamihere – who had served as the commissary of the electoral college held last October, and who continued, until yesterday, to exercise a responsibility for the Diocese of Polynesia, says that's entirely understandable:

"We talk about an incarnational Christ: and from time to time, we should expect to be able to see ourselves in the leadership of the church.

"So Fiji will now be leading Polynesia, in a sense. But there was also a very strong reminder for me in the service of the other parts of Polynesia. They too are part of the diocese, they too want to benefit from the service and the vision of this bishop."

Archbishop Don says he was delighted by yesterday's service – but not surprised.

"As usual with the Diocese of Polynesia, you get to experience an amazing expression of the cultural power of Polynesia. And its ability to be united and inclusive across nations, cultures, languages, and ages.

"Whenever you're in Polynesia, and especially when you're at services in the cathedral – the place just feels vibrant and alive, and you just feel humbled and happy to be there."

Ancient sounds echoed as the clergy processed into the service – the cathedral bells ringing, the conch shell sounding, both punctuated by the quintessential rhythm of Fiji, the beating of the lali, the hollow log drum.

The President and international guests were welcomed first – then the ones the wider Communion had sent from nga hau e wha to show support for Archbishop Cama's ordination.

There was Bishop John Parkes, the Bishop of Wangaratta, who represented the church in Australia – and then there was Canon Bruce Woodcock, an American priest who serves as Michael Curry's representative to the Anglican Churches in Asia and the Pacific.

He read a prayer of support from the Presiding Bishop, and a message of greetings from the Bishop of Hawaii, "the northernmost islands of Polynesia."

Then there was the Very Rev Christine Wilson, the Dean of Lincoln Cathedral. Lincoln is a companion diocese to the Diocese of Polynesia, and she brought greetings from her Bishop, Christopher Lowson – and a poignant message from the Archbishop of Canterbury, The Most Rev Justin Welby.

Archbishop Welby said that Polynesia's history "is scarred by the depredations of foreign powers, yet lit by faithfulness in word and deed by its people to the good news of Jesus Christ.

"Its Bishops have always been marked by courage, and frequently by holiness and heroism.

"My dear brother in Christ, I pray that inspired by those who have gone before you, and empowered by the Holy Spirit, the Spirit of Jesus who breathes over the waters, you will find the courage, faith, long suffering and perseverance to confront the great challenges before you.

"May you and all who serve Christ have the prophetic words that may challenge the world to love its creator by loving the creation, and to repent of the sins of greed and materialism which so threaten not only your climate but eventually the very land on which you stand.”

Archbishop Philip Richardson, who preached the sermon, paid tribute to the four previous Bishops of Polynesia that he had known – including Archbishop Winston Halapua, who had traveled from Cambridge in the UK to see his successor ordained.

Archbishop Philip said Fr Fereimi would soon stand "in that fine line of Bishops of Polynesia.

"But be of good heart and be confident in the call that God has placed upon you. Because when God calls, God does enable. And God does resource us."

Not least, he said, because of "the intercession of thousands.

"It still blows me away – it often brings me to the point of tears – when I hear the leader of the prayers of the people pray for 'Philip our Archbishop', or 'Philip, our Bishop'...

"I'm so grateful for those prayers. I'm constantly upheld by them.

"And you will be sustained this day, and into the future, by them."

Archbishop Philip said he not only looked forward to Fr Fereimi's ordination as a bishop, but also to his recognition as archbishop and primate.

"Archbishop Don and I will welcome you with joy in our hearts to this amazing, unlikely community of three.

"Holding each other, and our tikanga, in mutual accountability as we seek to be faithful to the gospel call."

Archbishop Philip finished his sermon by reflecting on the gospel reading – which tells of the resurrected Jesus appearing to the disciples on the beach after they'd spent the night fishing.

"Here we find that the fish aren't the only thing being grilled by Jesus on the beach in that early morning...

"It's obviously a re-enactment, isn't it, of Peter's threefold denial of Jesus – only in reverse?

"It's a remarkable illustration of Jesus' faithfulness, even to those who are not faithful to him. It's the grace of God at work in the lives of Jesus' followers.

"Have you let him down?

"Have you looked at the grim shadow of the cross, and run the other way?

"Have you denied the presence of Christ in the lives of those around you? I certainly have…

"How often is it easier to simply deny, deny, deny – because of what it might cost us.

"And Peter is us.

"Jesus' questions to Peter are questions of grace – and they come with a repeated command to feed, to tend and to follow.

"Like Peter, we all have our moments of denial.

"However, Jesus repeatedly pursues us.

"If we do love Jesus, his ministry becomes our ministry.

"We are to feed, to tend, and to follow.

"But we do so, knowing that Jesus' path to the cross becomes our path.

"My brother Fereimi – embrace it.

"And you will, I promise you, feel the embrace of God.

"And the leading of the Holy Spirit…"

And so the service built to its most solemn moments: the commitment, the invocation of the Holy Spirit to come upon the Bishop-elect – and the ordination itself.

It was hushed and, at times, emotional stanza – no more so than when the new bishop's sister, Mrs Titila Vere, presented her brother with his crosier, then wept at his feet.

Then came the Great Thanksgiving, and the crowd was so large the serving of Holy Communion took 20 minutes – a time adorned by the angelic, a Capella singing of the children from St Christopher's home in Naulu.

Archbishop Don later reflected on what he'd heard from them: "Those amazing young children, led by those wonderful sisters, and supported by the parishes of the diocese...

"What a ministry. To put it in a nutshell – you can't get a better demonstration of what we could and should be doing."

Two and a half hours after the service had begun, Archbishop Cama bestowed his blessing in the Fijian language, then processed from his cathedral, again to the sound of the drumming of the lali.

As Fereimi Cama walked down that aisle for the first time as an archbishop, the drumming of the lali surely heralded a new era for the Diocese of Polynesia.