The Archbishops have announced who is to become the next Bishop of Polynesia. He's a Fijian man who has demonstrated courage at the point of a gun – and readiness to serve Polynesians of every ethnic background.
• From classroom to church: achieving his childhood dream
• Vigils - and Vigilantes
• Fiji Sun story
• Fiji Times story
• RNZ Pacific announcement 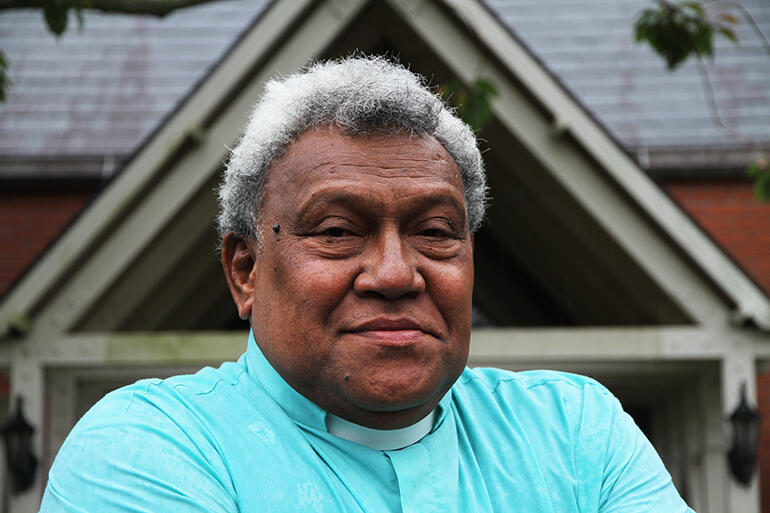 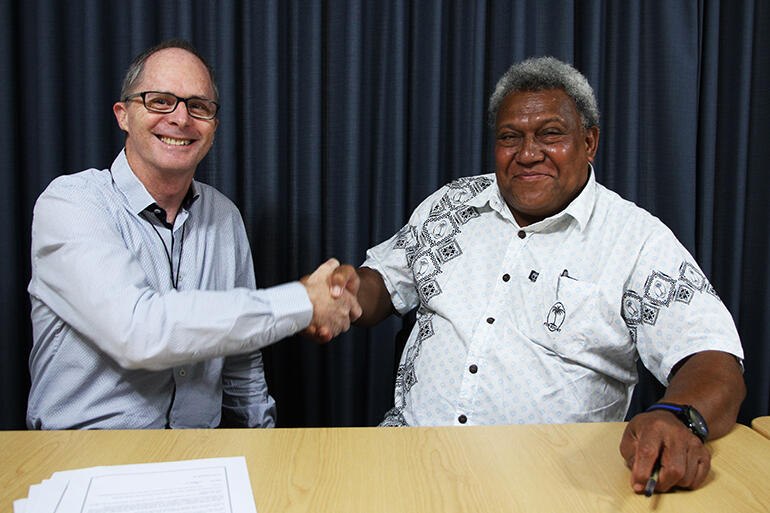 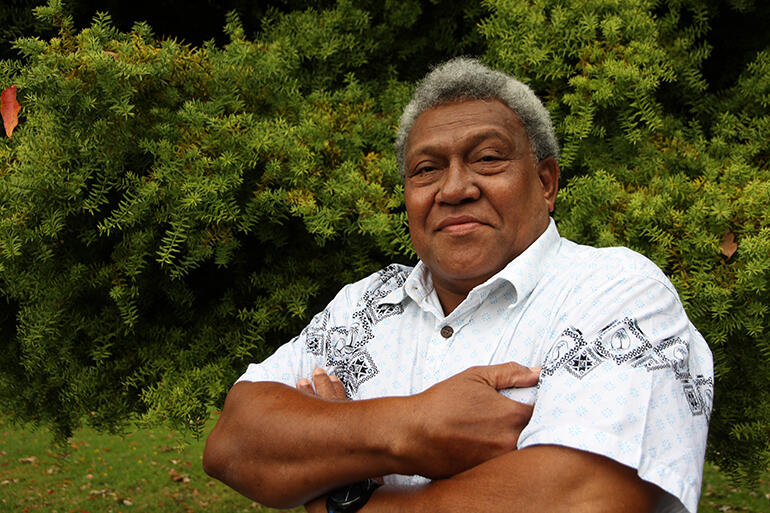 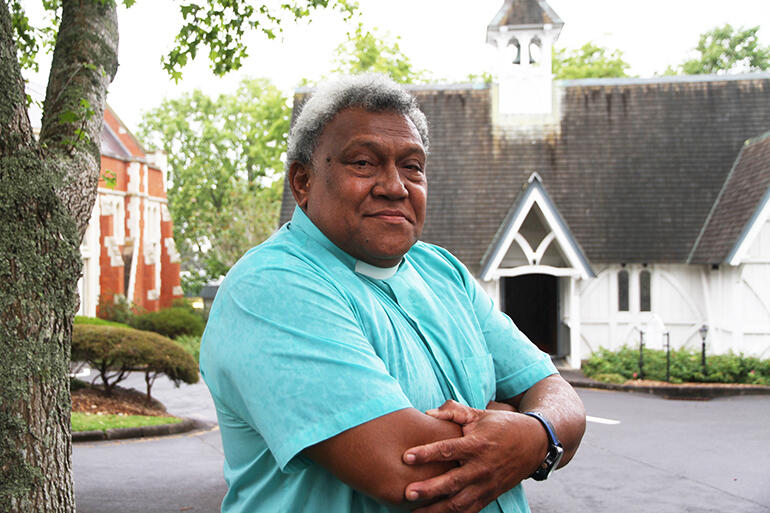 The Rev Fereimi Cama has been elected as the next Diocesan Bishop of Polynesia. He will therefore become Archbishop and Primate, or joint leader of The Anglican Church in Aotearoa, New Zealand and Polynesia.

Fr Cama's election as the seventh Bishop of Polynesia was announced today by his soon-to-be-fellow Archbishops, Don Tamihere and Philip Richardson.

Fr Cama, who is 63, is the Vicar of St Peter's Lautoka, and a former long-serving Dean of Suva's Holy Trinity Cathedral.

He was nominated to succeed Archbishop Winston Halapua at an electoral college held in Lami Bay, Suva, in late October.

Archbishop Don Tamihere, who served as the commissary at that college, describes Fr Cama as a "priest of the people. He has served among family and community for decades, and is a leader grown from the grassroots.

"He is a good man and he is ready to serve his people anew with humility and courage.

"The fact that he will be the first Bishop of Polynesia of indigenous Fijian descent is something else worth celebrating – though I know that Fr Cama is committed to serving all the nations and people of Polynesia with equal effort and respect."

Indeed: The record shows that Fr Cama is a i-Taukei man who has both proven his mettle – and his readiness to serve Polynesians of every ethnic background.

Fereimi Cama was born in March 1955 on the tiny island of Ono-i-Lau, which is closer to Tonga than to Suva.

Almost as soon as he was born, Fereimi's father was diagnosed with Hansen's disease, or leprosy, and sent away to an isolated island sanitorium for 11 years.

When his father did eventually return, Fereimi wished he hadn't – because he was, he says, a highly abusive man.

In 1968, at the age of 13, Fereimi made his escape. He was chosen to enrol at Queen Victoria School, in Tailevu, on Viti Levu.

In 1973 he returned to his island, where he became a licensed (ie, untrained) school teacher.

In 1975, he was selected to train as a teacher, and was sent to Corpus Christi teacher's college in Suva – which is where he met his wife, Mereadani.

But Mereadani was part-Solomoni – descended from the Solomon Islanders who were 'blackbirded' to work as forced labourers in Fiji in the 19th century. And Melanesians cling, as a matter of faith and identity, to their Anglican roots.

So for the first 10 years of their marriage, Fereimi stayed Methodist, while Mereadani was Anglican.

Fereimi saw that some Methodist Talatalas, or church leaders, backed the overthrow of the elected government.

He saw them urging their followers to block roads on Sundays. He saw those followers harassing people of other religions or denominations, and even driving them from beaches at gunpoint for "breaching the Sabbath."

So Fereimi chose to switch his allegiance. By this time he was teaching at Lami, on the outskirts of Suva, and the Cama family joined the Holy Trinity Cathedral congregation in 1987.

In 1988, Fereimi Cama was elected to the cathedral vestry. He soon became a lay reader – and in 1990, at the prompting of the then dean, Winston Halapua, he was ordained as both a deacon and a worker priest.

He continued teaching until 1995, when the late Bishop Jabez Bryce sent him to St John's College in Auckland, from where he graduated with his BTheol in 1997.

He returned to Suva that year and was appointed priest assistant at the cathedral. A couple of months later, the priest in charge was transferred, and Bishop Bryce – who had an old-school way of dealing with his priests – told him to "hold the fort while we look for a better person."

The bishop soon had cause to revise his assessment.

In December 1999, in fact, Bishop Bryce chose Fereimi Cama as the new dean of the cathedral.

Five months later, on May 19, 2000, George Speight and a gang of rebel soldiers stormed the Fijian Parliament, and took the Prime Minister, Mahendra Chaudhry, and 35 MPs hostage.

They were imprisoned in parliament – the Indo-Fijian MPs separated from the I-Taukei MPs, with a hundreds of armed Speight sympathisers in the parliamentary grounds, acting as human shields.

There were two Anglicans among the hostage MPs.

One, who was Indo-Fijian, shared a cigarette with a rebel soldier - then pleaded with him to ask for an Indo-Fijian priest to bring Holy Communion to the hostage MPs.

That rebel soldier contacted Bishop Bryce, who in turn told his new dean about the request.

At which point Dean Cama urged him not to send an Indian priest – because Speight's supporters included many who had terrorised Indo-Fijian cane farmers.

Instead, Dean Cama volunteered to go himself.

On the first Sunday after the coup, he was dropped outside the Parliament. Inside the gates, Speight's men scrutinised his communion set – the book, the wafers, the wine and water flask.

Then, at the point of a submachine gun, Dean Cama was led into Speight's lair – he'd installed himself in the overthrown PM's office. Speight then inspected his Communion set all over again, before allowing him to take the Eucharist to the hostage MPs: first to the separated Indo-Fijians, who were mostly Hindus and Muslims, but who all wanted Communion, and then to the I-Taukei parliamentarians.

Then, when those two services were over, he returned to the cathedral, where the MP's wives and families were gathered, desperately seeking news of their loved ones.

Dean Cama continued to run the gauntlet this way.

He returned to the besieged Parliament to take communion to the hostage MPs, every Sunday and Wednesday, for the duration of the 56-day siege.

He continued as Dean until December 2012. In 2013, at the request of by-now Bishop Winston, he served as priest in charge at a couple of Suva parishes, and then spent 18 months studying missiology at Carey Baptist College in Auckland.

He then returned to Suva, and in 2016, he was appointed the new Vicar at St Peter's, Lautoka, where he was inducted on Christmas Day 2016.

Days later, Fereimi and Mereadani had a car accident. Mereadani, who was struggling with serious health issues, died a week later.

She was buried on their 40th wedding anniversary.

Bishop-elect Cama said he was asked to become a candidate by people who wanted a Fijian to become the chief steward of their diocese.

"We've had a Samoan, in Bishop Bryce, we've had a Tongan in Bishop Winston – and people felt that it was now time for a Fijian to lead."

"My vision," he said, "is not to introduce anything new. But to pressure-cook what is already there. To make it tender, attractive, and easy to digest."

He's passionate, he says, about building up relationships in the diocese – and passionate too, about seeking a better deal for those at the bottom of the heap.

Bishop-elect Cama likes to quote John Wesley who, when he became famous, made lots of money – almost all of which he gave away.

This so baffled the English Tax Commissioners that in 1776 they accused him of hiding silverware on which he hadn't paid excise tax. He answered them this way:

"I have two silver spoons in London, and two in Bristol.

"And I shall not buy any more while so many around me want bread."

In that regard, Bishop-elect Cama is determined to improve the lot of the many unemployed non-stipendiary priests who are taking full parish responsibilities – but who live, he says, "below the poverty line."

He's also  concerned for the plight of the Melanesians, and part-Melanesians, who make up a significant share of Fiji's Anglican congregations.

There are 44 Melanesian settlements throughout Fiji – none of which has secure land tenure.

Melanesians are not recorded on Fiji's tribal registry, the Vola Ni Kawa Bula – and are therefore frozen out from owning mataqali (clan) land, or having access to qoliqoli, or traditional fishing grounds.

"I said at the electoral college that these people have been neglected. They have been used by the Government, and the church hasn't uttered a word.

"I said to the college: 'Even if I have to knock at the door of the Prime Minister, I will do it."

He's probably not fazed by that prospect, either.

Because he's been there before.

At the point of a gun.

Fr Cama will be ordained as a bishop, installed as Bishop of the Diocese of Polynesia, and recognised as Archbishop and Primate, in Suva's Holy Trinity Cathedral on Sunday, March 10, 2019.