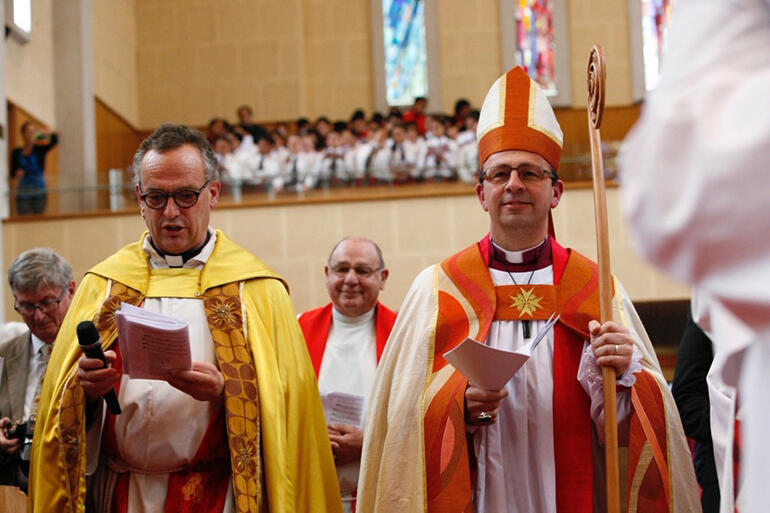 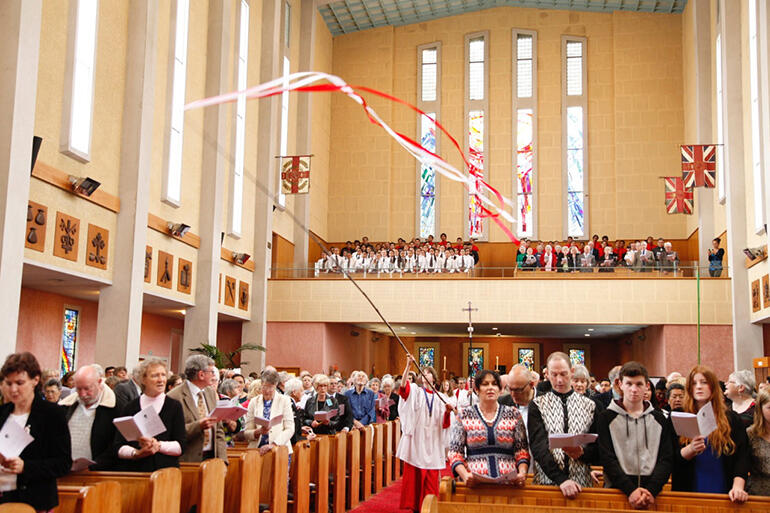 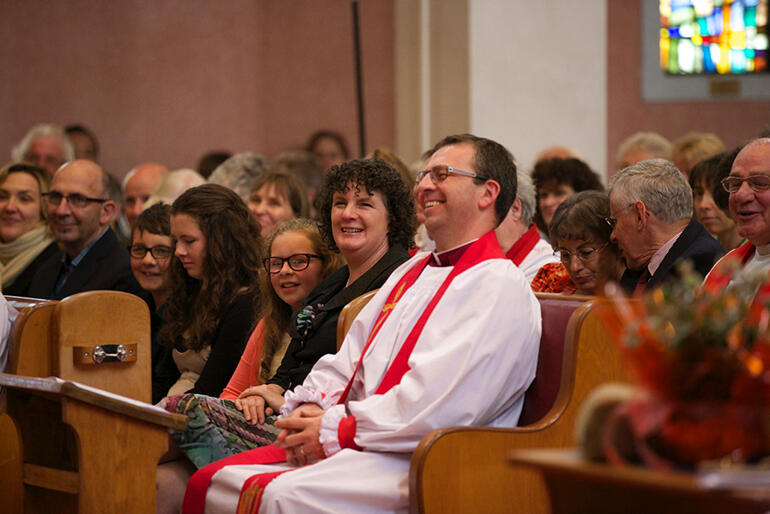 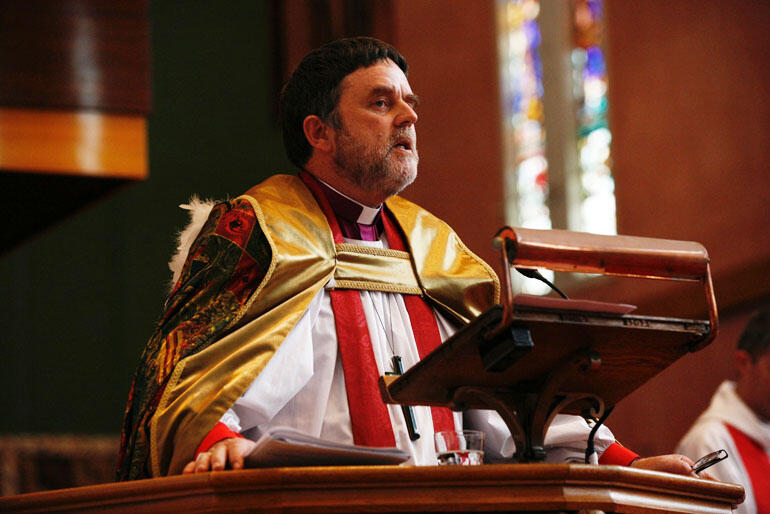 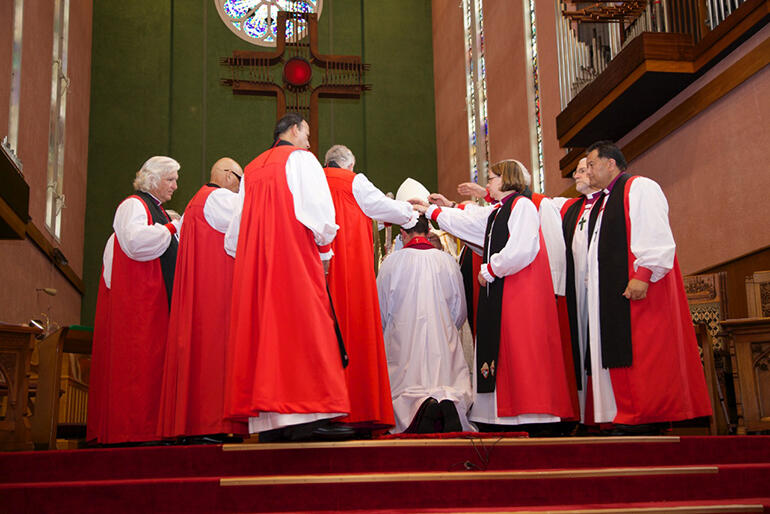 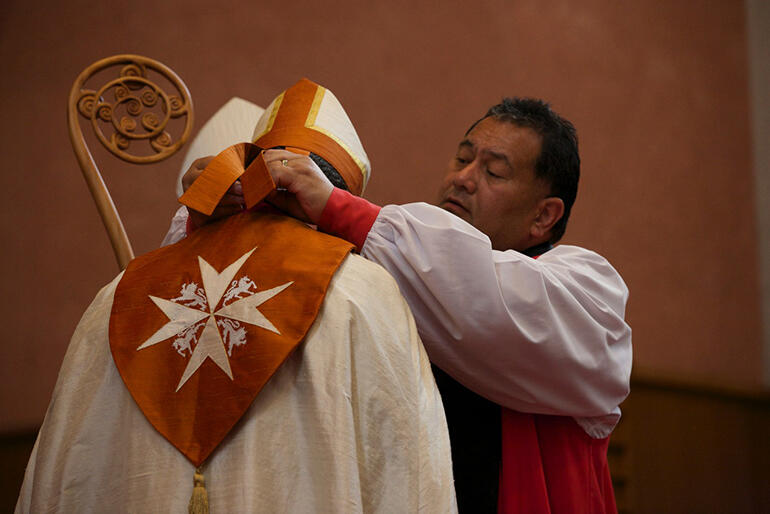 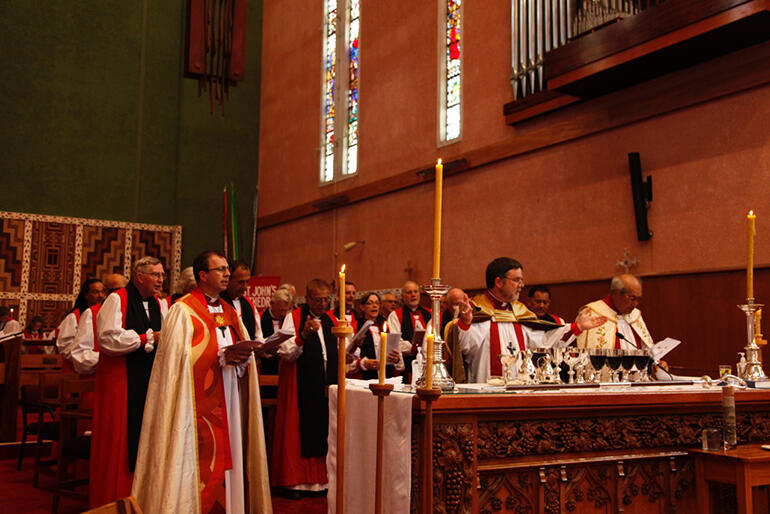 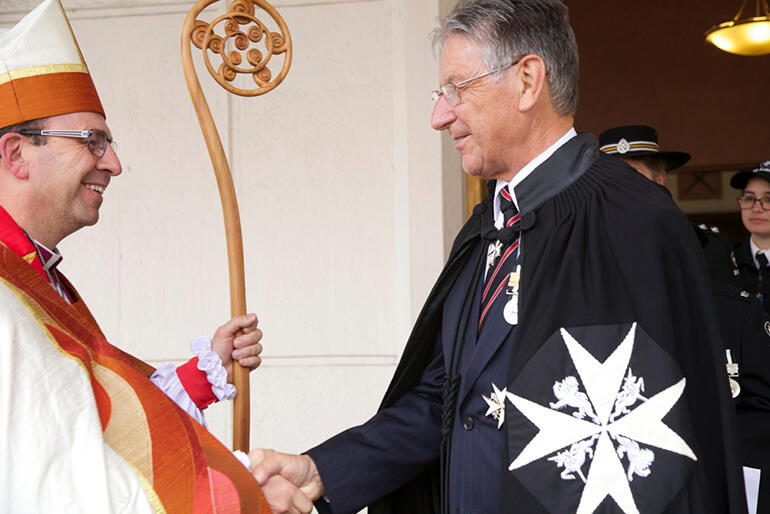 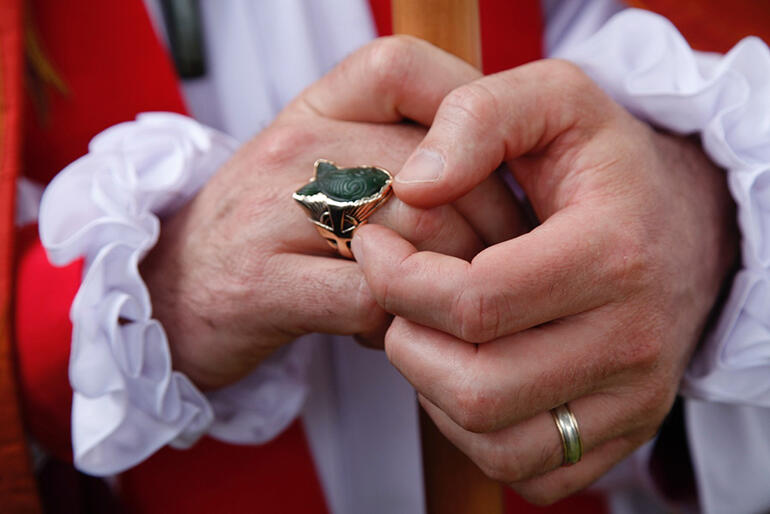 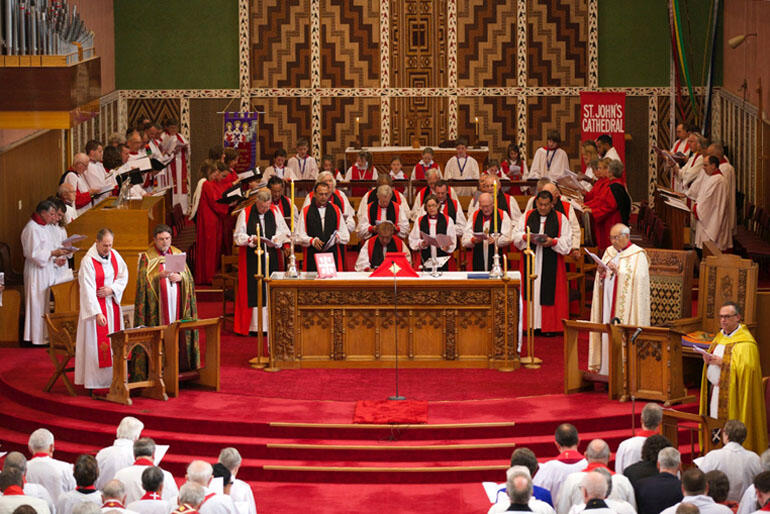 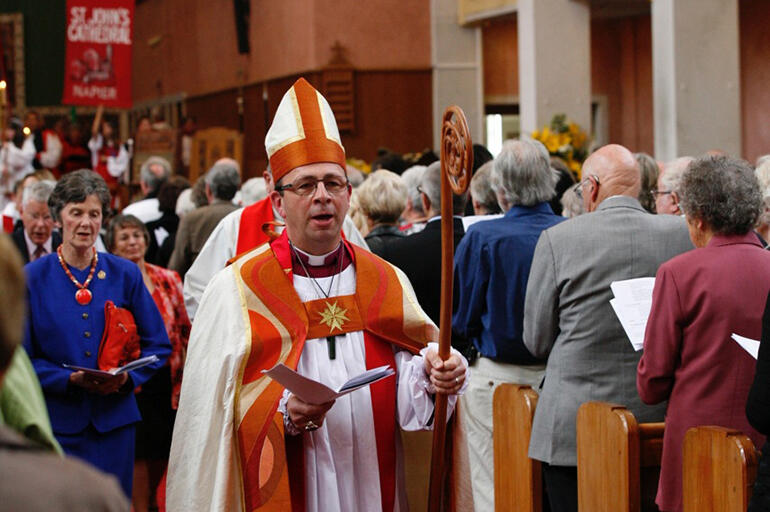 More than 700 crammed the Waiapu Cathedral in Napier this afternoon to celebrate the ordination of Andrew Hedge as the 16th Bishop of Waiapu.

Extra seating had to be found at the last minute for the overflow congregation, which included large numbers of folk from outside Waiapu – and a busload of parishioners from St Andrew’s, Cambridge, where Andrew had served for the last six years before his election.

What that tells you about Waiapu’s new bishop, suggests Bishop Kelvin Wright of Dunedin, is that the Rt Rev Andrew Hedge, “is a very popular man.

“I mean that in the best sense of that word – he earns people’s respect, trust and friendship.

“Lots of people just couldn’t be anywhere else today.”

Bishop Kelvin is well placed to make that assessment. He was the Ministry Educator in the Diocese of Waikato in the early1990s, when a youthful Andrew Hedge began to explore whether he had a vocation to the priesthood, and Bishop Kelvin has observed his ministry from afar ever since.

And the fact that 20 bishops, past and present (including four retired Bishops of Waiapu) attended the ordination – Bishop Kito Pikaahu says that’s the biggest episcopal turnout for an ordination that he’s seen for ages – showed the bishops wanted to affirm both Waiapu’s new bishop and the diocese itself.

In fact, the episcopal turnout would have been higher still had not Archbishop Winston Halapua slipped over on the President of Fiji's front lawn the other day and broken his leg.

Today’s preacher, Archbishop Philip Richardson, had spent time earlier this week with Bishop-elect Hedge at the Cistercian monastery at Kopua, where he was spending his episcopal retreat with his retreat partner and friend, the Rev Damon Plimmer.

He also paid moving tribute to the new bishop's wife, Raewyn, and to their children, Jessica, Caitlin and Ethan.

“He deeply honours what you bring into his life. He acknowledges how well you know him. He appreciates more than he can find words to express how willing you are to speak the truth in love – even if it costs you, and it costs him for you to do so.”

Archbishop Philip then turned to the congregation:

He spoke too, of Bishop Hedge’s self-awareness, humility and honesty.

“I also discovered that your new bishop has learned to face into himself, he knows himself, his limitations, his vulnerability and fallenness. He faces in to his anxiety and his sense of inadequacy and in doing so has found himself held in God's grace.”

Archbishop Philip said that in his time in Kopua with Andrew Hedge and Damon Plimmer, he had “learned again the companionship of vulnerability, and the fellowship of honest engagement.”

The service had a stress-free, two-tikanga feel about it, too.

“The bicultural stuff was easy and relaxed,” says Bishop John Bluck, “as though it was part of the furniture.”

There was Archbishop Brown Turei in his bishop’s cathedra, for example, a big crew of Maori clergy – not only from Te Tai Rawhiti, but also from Manawa o Te Wheke – as well as a good turnout of students from Te Aute and Hukarere Girls’ Colleges.

There was a sprinkling of karakia and himene through the service, too.

One of the more poignant moments, in fact, came when the Hukarere choir led the Lord’s Prayer – using the now famous melody composed by Archbishop Turei and girls from the college in the 1980s, when Hukarere was on Bluff Hill in Napier and Archdeacon Turei was school chaplain.

Damon Plimmer believes the new bishop is a “really good fit” for Waiapu.

“Andrew is a good friend,” he says. “But this is about more than that.

“He’s going to be on the road, visiting – and his whole objective will be to get to know people. He will want to listen, he will want to establish relationships.

“He’s not come here to push an agenda, he simply wants to move this community forward together. From that place of being immersed in the midst of it all, he will lead this diocese forward.

“He’ll do that. And he’ll do it exceptionally well, too.”

There are perhaps two final things to note about what we all saw in the cathedral today.

One is the new bishop’s cope and mitre.

Bishop Hedge had asked Liz Kimberley to design garments that are plain and not flashy.

So the cope is a relatively simple affair – white trimmed with copper-toned orphrey (the panels at the front edges) and morse (the top connecting band).

The colours are symbolic of East Coast harvests, landscapes and beaches – and they are highlighted by flowing bands that symbolise pathways and pilgrimages, so dear to Waiapu’s recent history.

But it’s the hood at the back of the cope that really says something about a bishop who has an appetite for down-to-earth service.

It’s embroidered with a Maltese cross, the symbol of the Order of St John, the ambulance service for which Andrew Hedge has done weekly shifts in Cambridge, and will continue to serve in Waiapu.

The final thing to note was the passing comment that the new bishop made himself, just seconds before he delivered his first episcopal blessing.

And as he acknowledged his new flock, he touched briefly on the leadership that many in Waiapu yearn for.

“May the journeys that we share in the days, weeks, months and the many years ahead of us… be times of great joy and filled with God’s grace.”