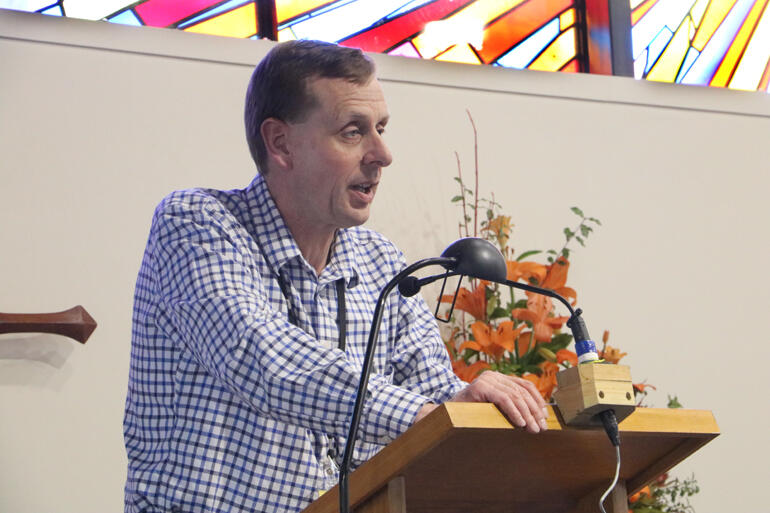 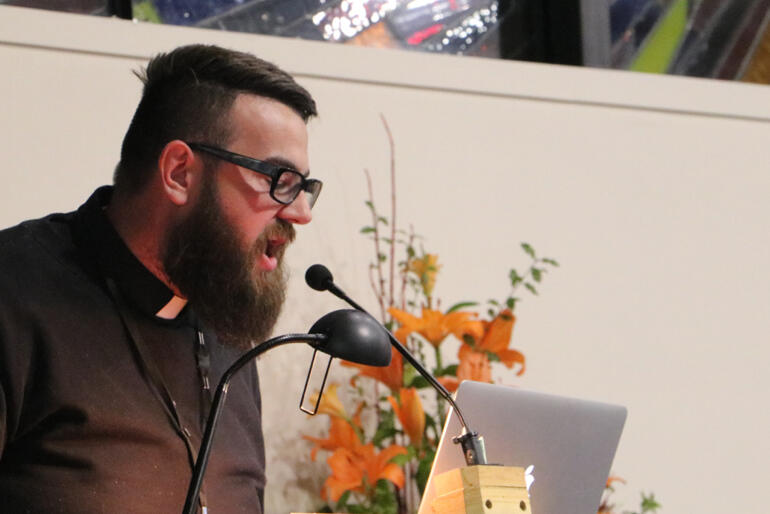 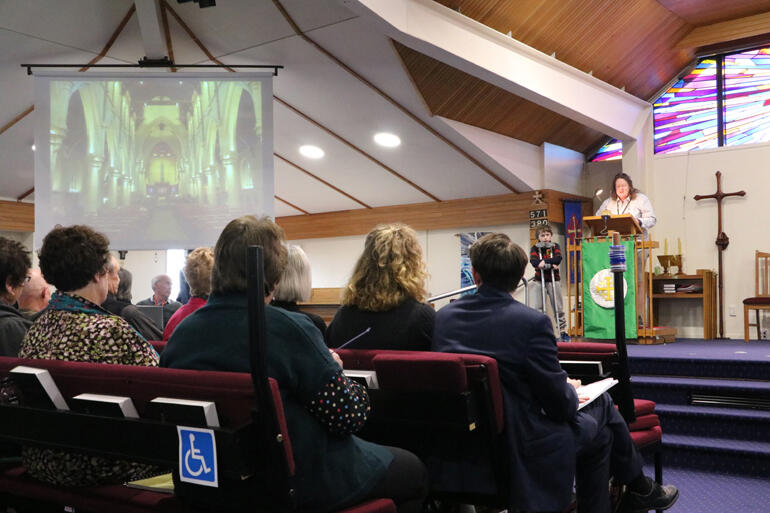 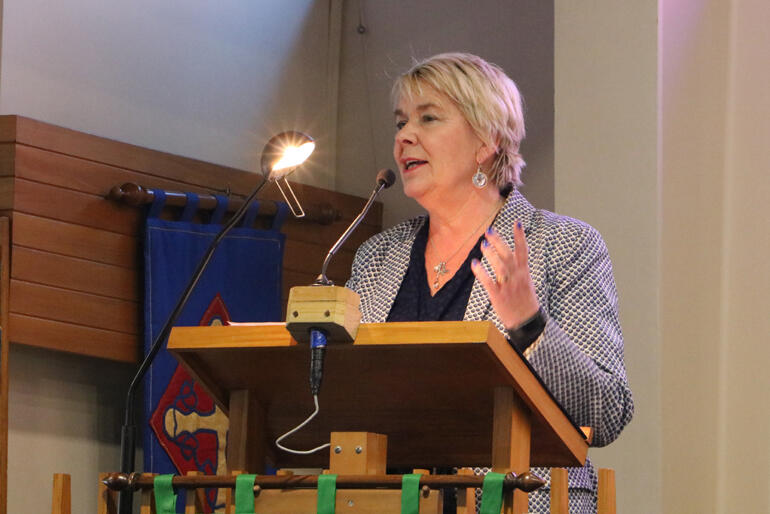 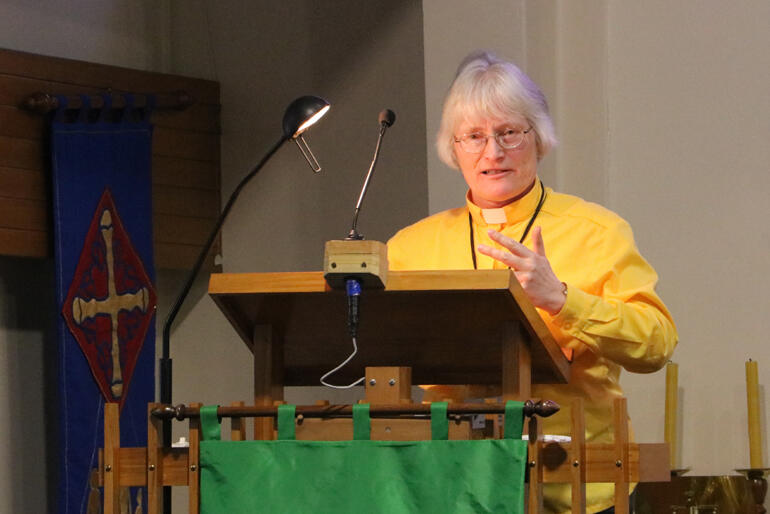 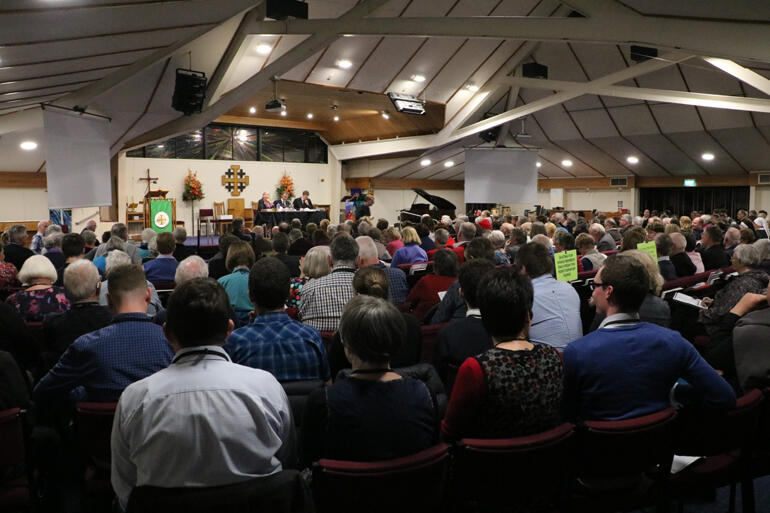 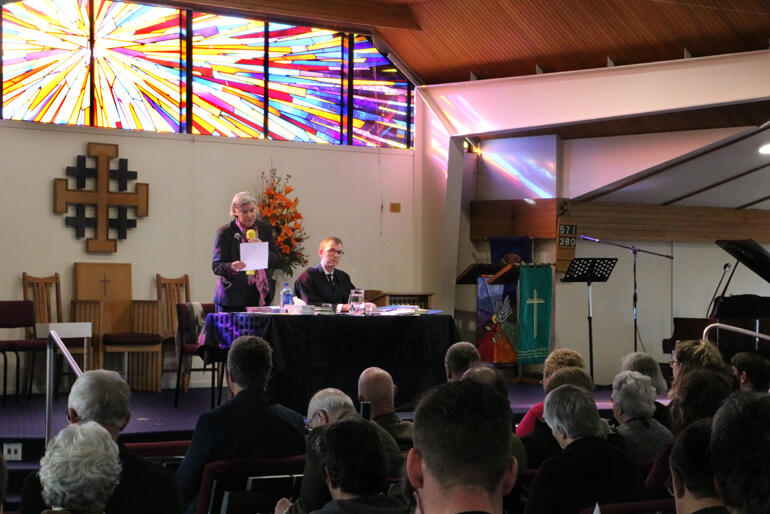 The Diocese of Christchurch’s synod has voted to reinstate ChristChurch Cathedral in the Square rather than replace or give away the historic building.

“I think it was a superb synod,” she said.

“Where there could have been rancour and name-calling, instead there was deep respect.

“Synod members with very different opinions spoke to one another with grace and dignity.”

The synod took a ‘one synod member, one vote’ ballot close to midday today and it achieved an absolute majority of 54.9% on the first round.

The decision was immediately confirmed by synod, which was almost unanimous, bar one dissenting voice.

Bishop Victoria offered her thanks to all who had come to synod with open hearts, ready to listen and prepared to move.

“Last night, it was pretty much a dead heat, with Option A [to reinstate] and B [a new build] neck and neck,” the bishop told synod this afternoon.

“It is telling that this body of faithful Christians, many of whom came believing in one option, after listening prayerfully to the debate, concluded they needed to change.”

“We have chosen not only to restore the building, but more importantly, to restore relationships between the church and the city of Christchurch."

“We can rejoice that now we move from living around a derelict building, to a site that will again be transformed into a place of prayer and worship.”

Rev Spanky Moore, who opposed reinstatement in favour of an inspiring contemporary build, was disappointed today, but pleased at one aspect of the outcome.

“We all agreed that people are what is important, so our mission relationship with the people who wanted the original cathedral was a strong argument.”

But he is also saddened the church has lost an opportunity to have a serious conversation about whether or not Anglicans will still fill the cathedral in 30 years’ time. He had hoped the message of Option B would be good news to the world.

Another synod member Tilly Flood, is a former parishioner of the Cathedral in the Square who advocated for it on Friday.

“I’m overwhelmed,” she said. “I can’t believe this decision has finally happened – at last – it is very, very good news.”

Christchurch Regeneration Minister Nicky Wagner was at synod to hear the voting results.

“This is a fantastic result for the church, the city and New Zealand in general,” she said.

Bishop Victoria is hopeful for the future of the cathedral project, and praised the Minister who she said had listened hard, and responded carefully to every objection and concern of the church during negotiations.

Christchurch Mayor Lianne Dalziel was also on hand to hear the announcement.

“I felt quite emotional when I heard the news,” she told Taonga.

“This decision finally gives the city the opportunity to move on, knowing what will be at the heart of the Square.”

Rev Glenda Hicks from Belfast-Redwood parish had also argued for a new cathedral, but today she was pleased that the church’s time and energy would no longer be tied up on contending the Cathedral’s future.

“We can now put those resources back into the core mission of the church, which has very little to do with buildings and everything to do with people,” she said.

Rev Dr Patricia Allan was perhaps best qualified of any church member to discern what today’s synod decision might mean to the people of Christchurch.

Last month she was awarded a PhD in anthropology for her thesis on ‘The once and future cathedral’ which addressed the Cathedral controversy through surveys of Cantabrians.

“I think in this debate we have seen a power contest with financial, political and ecclesiastical overtones.” she said,

“But more than that, it has been a contest of meaning – of what the Cathedral in the Square means for different people. We have heard many people talk about the cathedral’s impact on their identity. It has been called a turangawaewae, or place to stand.

“Many outside the church have used the word ‘icon’, calling the Cathedral an icon of our city.

“For me, the meaning of an icon is as a keyhole into heaven.”

As the news broke, Bishop Victoria cautioned the decision did not mean a new cathedral would pop up overnight. Even with the Government’s assurance of legislative support to smooth the way, the expected timeline for a completed cathedral looks unlikely to come in under 10 years.

But that said, the cathedral reinstatement can now move to the next stage.

First, the Church Property Trustees and the Government will work to establish an independent fundraising trust and the Unincorporated Joint Venture to move the building forward, and they will need to confirm all funding from the Christchurch City Council and the Great Christchurch Buildings Trust.

The CPT and the established Unincorporated Joint Venture will then set up a project budget comprising construction costs (estimated $104 million), fundraising costs (estimated $4 million) plus additional funds to allow for further costs.

This will include an endowment to fund of an estimated $10million intended to cover ongoing insurance and maintenance costs.

No significant work will begin on each part until funding sufficient to cover the total cost of each part has been guaranteed, inclusive of endowments needed to cover on-going costs of insurance and maintenance.

Bishop Victoria believes that the decision sends an important message from the church to the city of Christchurch, to Canterbury and to the nation.

“It says we have listened to what the community has asked us for, near and far, and we have responded to your call.