With glass walls on three sides, and stacking glass doors which allow the end wall to be flung fully open, the new chapel at Auckland's Holy Trinity Cathedral aims to deliver a theological as well as architectural statement. 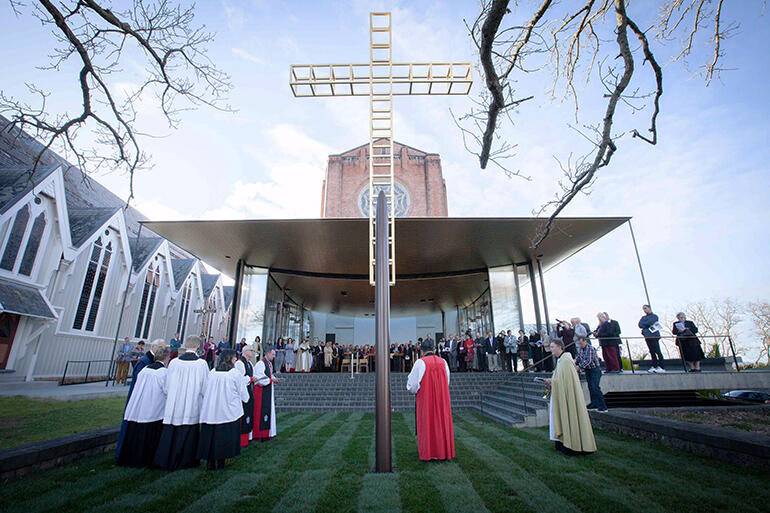 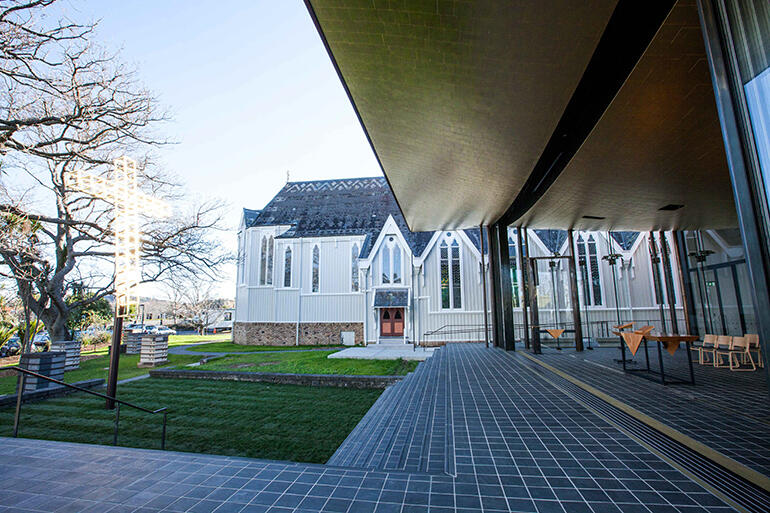 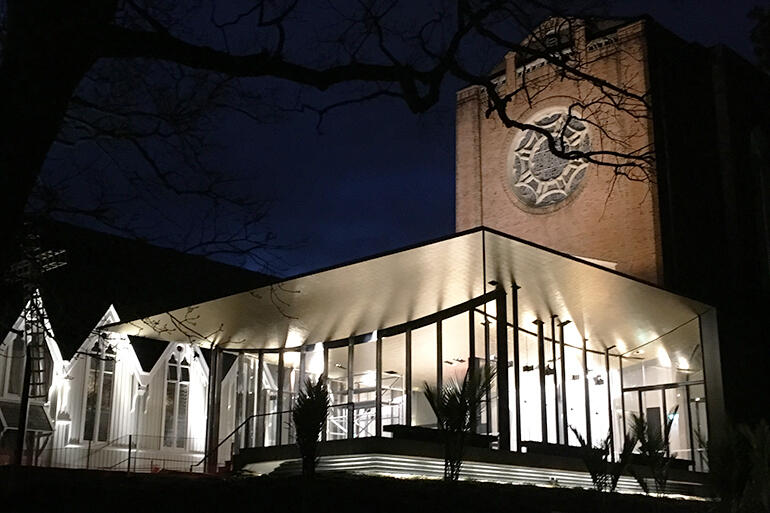 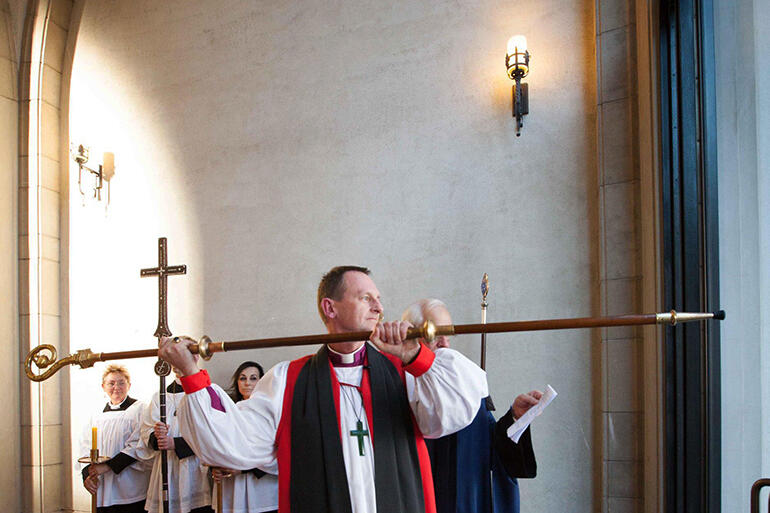 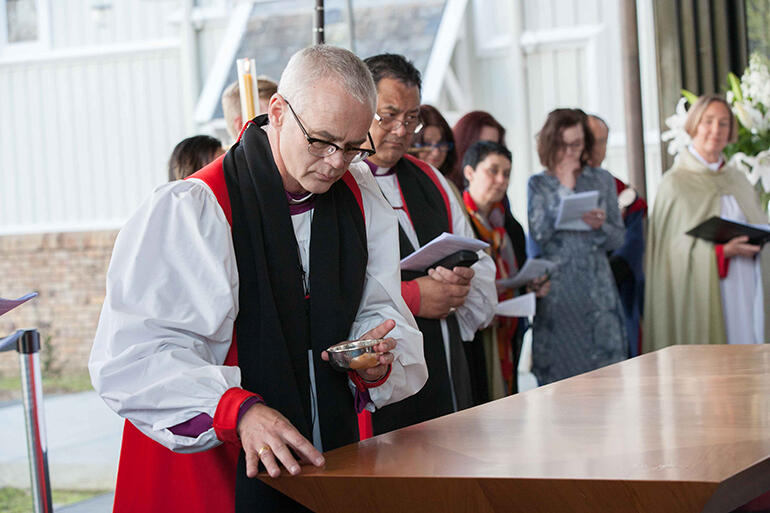 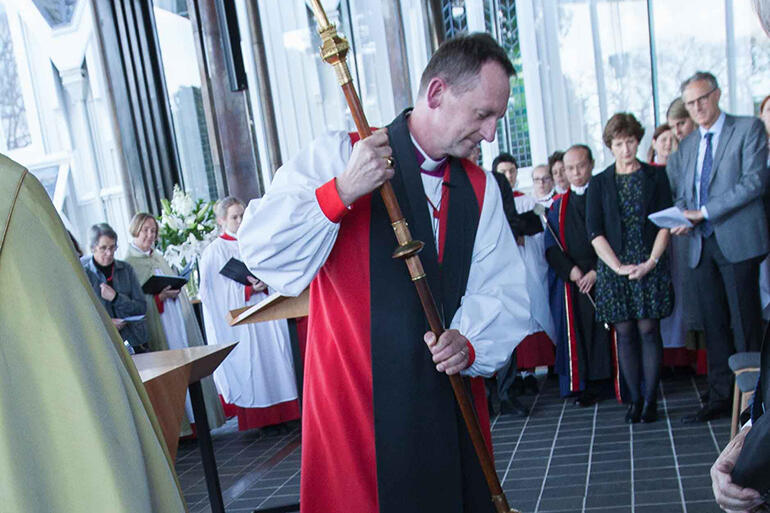 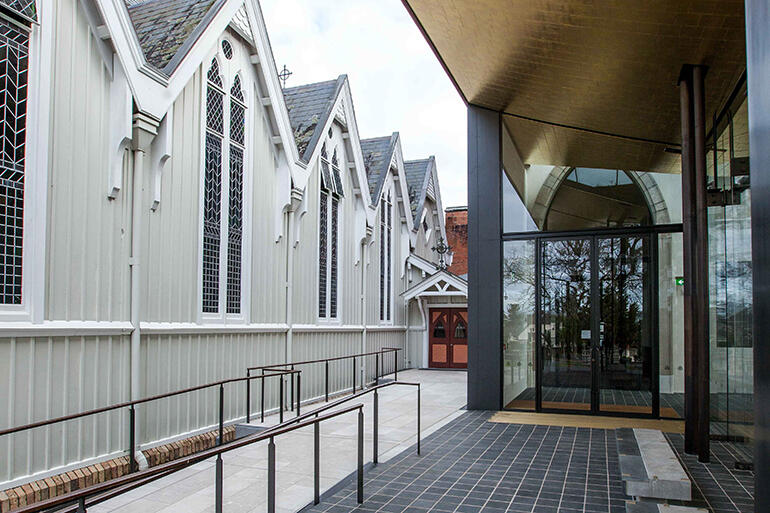 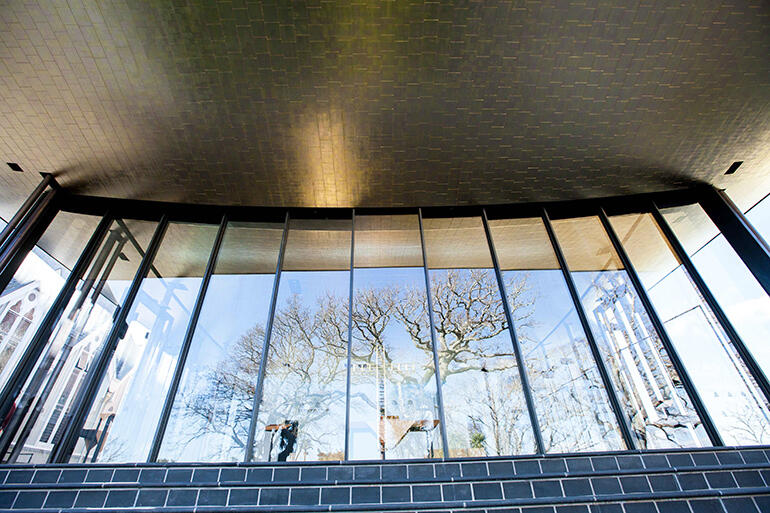 On Sunday afternoon the Bishop of Auckland, Rt Rev Ross Bay dedicated The Bishop Selwyn Chapel – a new, avant garde structure which, he suggested, is also a potent architectural and theological statement.

With  glass walls on three sides, and stacking glass doors which allow the end wall to be fully opened, the Fearon-Hay designed chapel connects the cathedral and the community, and challenges the notion of an inward-looking worship space.

The new chapel will become, said Bishop Ross, a place of gathering and sending, worship and mission.

The metaphors don’t end at those vast glass windows and door, either.

There’s a new ‘gated’ gilded cross (by Christchurch sculptor Neil Dawson) on the lawn outside the chapel.

It stands on a central axis between the chapel and Maungakiekie, One Tree Hill – so that anyone standing on the centre line of the new chapel can look straight out to Maungakiekie, and see that famous maungaframed by the gold rungs of the cross, whose apex stands 8.4m above the lawn.

The new chapel and cross, said Bishop Ross, are “this generation’s contribution to the development of a cathedral for Auckland.”

While the cathedral has been 59 years in the making, it still hasn’t been consecrated. That’s not scheduled to happen until October 2017.

Anglican canon law stipulates that a church cannot be consecrated until it is debt free – and completed.

Work is still underway on the final elements of the $14.9 million ‘Selwyn’s Vision’ project – the construction of a new organ for Holy Trinity Cathedral, and the overhaul of the 100-year old organ at Old St Mary’s – or, as it’s properly known now, St Mary’s-in-Holy-Trinity.

The new HTC organ is being built by Nicholson and Co, of Malvern, in England, and is presently being transported to Auckland inside five shipping containers.

Teams of specialists from Nicholsons will assemble, install tune and test the organ. Their work is expected to continue until the middle of next year.

1898: St Mary’s is completed and consecrated at the Cathedral Church of the diocese.

1973: The chancel is completed and opened for use at the new cathedral church.

1982: St Mary’s Church is moved across Parnell Rd to its present site.

1991: Building of the cathedral nave begins.

1995: The first worship service to take place in the nave is held, with Queen Elizabeth present.

2012: ‘Selwyn’s Vision’ begins – a project to complete the cathedral with the addition of a lady chapel, removal of the bridge and refurbishment of both cathedral organs.

June 2014: The cathedral doors close in preparation for the removal of the bridge between the nave and chancel.

August 2014: The Archbishop of Canterbury blesses the foundation stone for the Bishop Selwyn Chapel.

August 21, 2016: The Bishop Selwyn Chapel is dedicated, and opened.