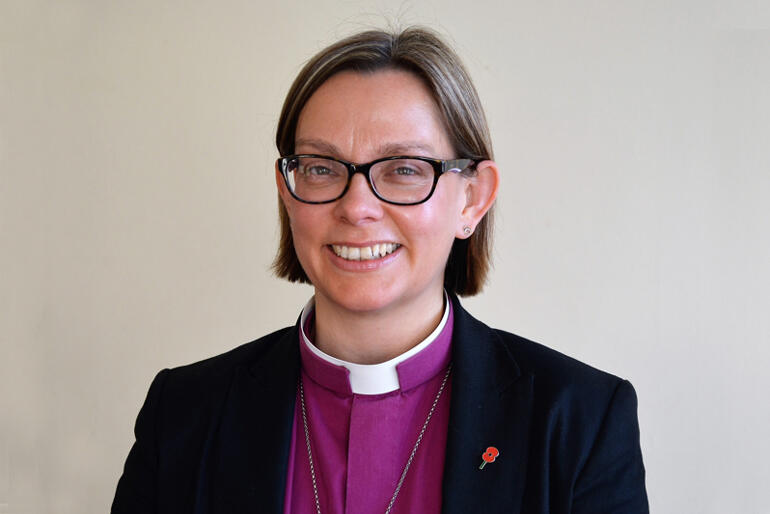 Bishop Helen-Ann Hartley has been appointed Bishop of Ripon in the Diocese of Leeds, in England.

She will be formally farewelled from the Diocese of Waikato and Taranaki at a service in Hamilton’s St Peter’s Cathedral on December 16, and will conduct her final service in the diocese on Christmas Day.

The announcement of her appointment as the Suffragan (Area) Bishop of Ripon was made simultaneously from Downing St in London, and in a joint letter from Bishop Helen-Ann and Archbishop Philip Richardson, which was broadcast to the Diocese of Waikato and Taranaki last night at 11pm NZT.

Dr Hartley, who is 44, was ordained a bishop in St Peter’s Cathedral in February 2014, and installed as the 7th Bishop of Waikato. At the time she was the first woman priest ordained in the Church of England to become a bishop.

Bishop Helen-Ann will be installed at Ripon Cathedral on February 4, 2018, and The Diocesan Bishop of Leeds, the Rt Revd Nick Baines said he was delighted to welcome her.

“She brings expertise as a theologian,” he said, “and episcopal experience from the wider Anglican Communion. She will add great strengths to the leadership and ministry of this diocese.”

In last night’s letter to the Diocese of Waikato and Taranaki, Bishop Helen-Ann wrote of her delight, surprise and honour at receiving this new call, and in joining the episcopal team in the Diocese of Leeds, which is England’s newest and largest diocese.

“While I rejoice in this appointment,” she wrote, “I am sad to be leaving the Diocese of Waikato and Taranaki, and the many friends and colleagues that I have made here.

“I have been inspired by the faithfulness, courage and resilience of the many people and communities that I have encountered.

“My nearly four years as bishop here in the Waikato have presented a number of unique challenges. I have sought at every turn to focus on God’s mission, and to uphold the immense trust placed in me when I was elected bishop with as much grace, humility and humour as I have been able to muster.

“Above all it has been an immense joy to have worked alongside Archbishop Philip. His encouragement and support have been a source of unwavering strength, and I shall miss the dynamic of that partnership in mission above all.

She continued: “The Diocese (of Waikato and Taranaki) continues to address some key challenges of sustainability and structure moving forward, and I am confident that over the past four years some important steps have been taken to move towards a firmer future.”

Archbishop Philip says that although Bishop Helen-Ann’s call “has come more quickly than I expected, it has all the marks of the work of the Holy Spirit.”

“She has given herself wholeheartedly to leadership in this diocese and across our province and I am deeply grateful for her partnership in ministry. I wish her God's richest blessing in her future role with all of the challenges of that large and busy region of the Diocese of Leeds.

“I am so very glad that Myles (Bishop Helen-Ann's husband) will be present at the Diocesan farewell. His unwavering support and encouragement has been such a feature of these years and Belinda and I have come to cherish the friendship of them both".

Archbishop Philip says he will be working with the senior staff of the diocese over the next few days to develop a framework for episcopal leadership and oversight for the next period.

Helen-Ann Hartley was born in Edinburgh in 1973 and grew up in the north east of England.

She is the fourth generation of her family to be ordained, and was priested in 2006 in the Diocese of Oxford.

She worked as one of a team ministering to rural parishes in Oxfordshire, before being appointed as the Director of Biblical Studies and a lecturer in New Testament at Ripon College Cuddesdon, near Oxford.

Helen-Ann arrived in New Zealand in 2010 to do research at St John’s College – and she returned here in February 2011 to take up the position as a dean of the college.

In 2014 she became joint diocesan bishop of the Diocese of Waikato and Taranaki – which is unique in the Anglican Communion with two equal bishops sharing jurisdiction across the whole of the diocese.

1 Rev Dr Helen-Ann Hartley was ordained a bishop in February 201 in Hamilton. At that stage, the Church of England had not made the changes which have seen it begin ordaining women bishops.

2 The Anglican Diocese of Leeds came into being at Easter 2014. It was the first new diocese in the Church of England since 1927. The new diocese has five smaller episcopal areas. The Ripon Episcopal Area has, like Waikato and Taranaki, a largely rural setting. It includes the North Yorkshire Dales and the city of Ripon is its largest urban area.

3 Bishop Helen-Ann’s husband, Myles, is a musician and church organist.