In the aftermath of the Canterbury earthquakes, Christchurch Diocese moves towards a dramatic reshaping of its map.

• Full resolution on the strategic review

• Will we be set free? Bishop Victoria's charge 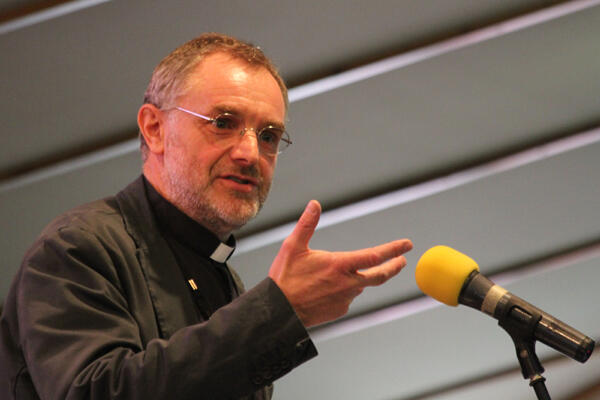 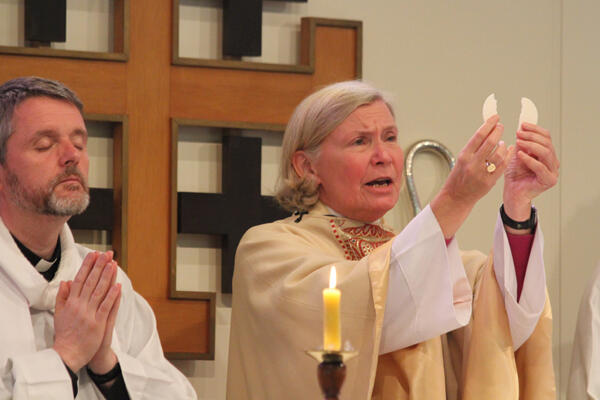 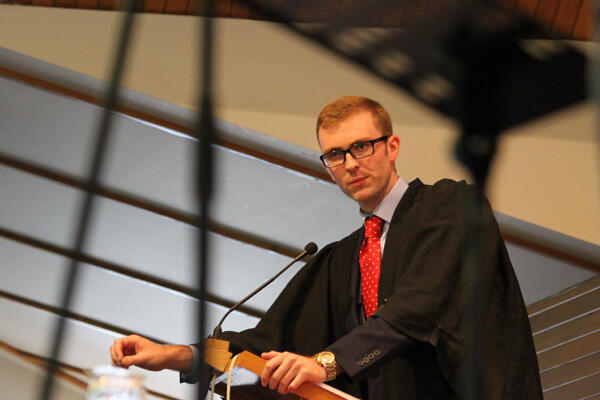 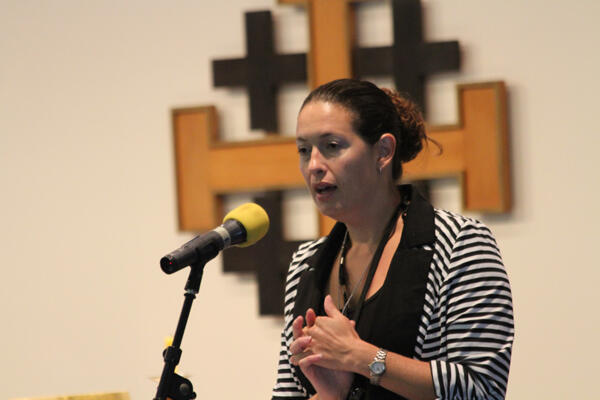 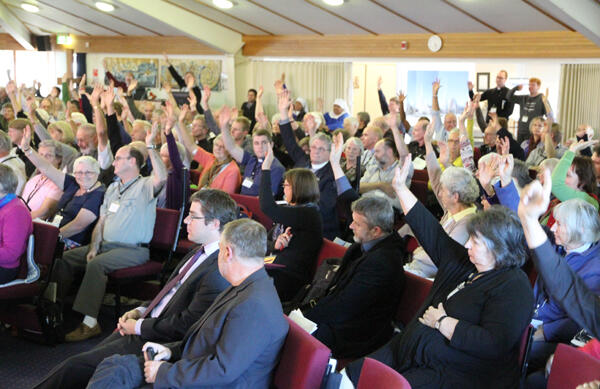 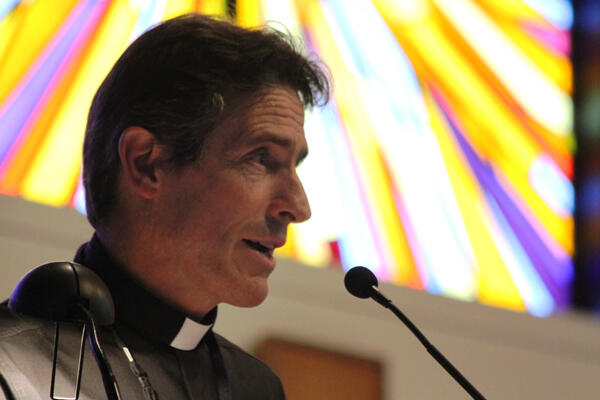 In the wake of the Canterbury earthquakes the Diocese of Christchurch has voted to take the next step towards a dramatic redrawing of its map.

The diocese met in a special synod on Friday and Saturday, and chose to proceed on a path which could see the 46 parishes in and around Christchurch being significantly reduced, even halved in number, as a result of parish mergers.

The draft proposal, which had been prepared by a Structural Review Group, was received by the synod, and it will now be sent to the Diocesan Standing Committee for review.

That body now has the task of bringing proposals for adoption at later sessions of the synod.

In her chargeto the special synod, Bishop Victoria Matthews described the challenge facing the diocese in succinct and blunt terms:

“How will we as a diocese respond to the devastation of property, and the re-arrangement of the population of our region following the earthquakes in Canterbury?

“Will we be set free? Or will we become even more imprisoned by our possessions and structures?”

The diocese’s Church Property Trustees have advised that there are around 200 earthquake-damaged buildings across the diocese – including 38 which have either been destroyed, demolished or require repairs that will cost more than $50,000 each.

According to the CPT, the shortfall between the loss and the insurance cover could be as high as $30 million[1].

Furthermore, the cost of assessing then strengthening the surviving buildings, so they comply with the new earthquake building code, could be a further $11 million.

The ground has shifted under the diocese in other ways, as well.

Christchurch itself is being drastically reconfigured, with major new subdivisions being planned – almost 15,000 sections in the west alone – while the city’s Red Zone (some 8000 homes) is being evacuated.

In the light of these changed realities, last September the regular diocesan synod resolved to set up a Structural Review Group. Its task was to come up with a proposal for a future map of the diocese – for discussion at the weekend’s specially-convened synod.

The demands on the six-person SRG were formidable. During February, for example, the SRG members went two-by-two to 46 parishes, and engaged in weighty and emotional discussions with clergy, vestry and staff in each case.

Their work culminated in 29 hours spent hammering out their proposal over one weekend in March.

The dilemma in the North-East

Archdeacon John Day, who chaired the SRG, has today illustrated some of the realities driving that proposal.

In the North-East of the city, he says, the suburb of Burwood has seen 40% of its residential area disappear into the Red Zone.

All Saints Burwood now finds itself on the very edge of the Red Zone – with its access on New Brighton Rd, which may become a river pathway, and the community it once served now relocated to its north.

Which is where you will find St Mark’s Marshland – which, within five years, will be surrounded by 2500 new homes.

And to this day it has no running water, and can seat only about 60 people.

Then there’s St Stephen’s Shirley, which is a big, bustling and lively church which lost all its buildings – church, vicarage and hall – in the quakes.

The SRG proposal suggests short, medium and long term developments in the North-East, which would involve the four parishes of Belfast-Redwood, North New Brighton, Burwood and Shirley working together for 10 years.

This would allow those partnered parishes time to sell St Mark’s Marshland, the St Stephen’s church and vicarage site, and the complete site of St Andrew’s North New Brighton.

These sales would finance the buying of bigger parcels of land in more strategic sites to build new churches.

The 10 years would also allow time to develop new ministries – and then, after that period has elapsed, to become separate parishes once again, with the possibility of a new parish emerging in the Marshlands sub-division.

Who draws the short straw?

Other significant proposals include the merging of St Barnabas Fendalton with the adjacent parishes of St Mary’s Merivale and St James Riccarton.

St Mary’s Merivale is one of the best-known parishes in Christchurch, and in pre-quake times it was one of the icons of that leafy suburb.

But St Mary’s church and vicarage have already been demolished – and the SRG says it’s too early to say how that Merivale site would be developed.

The proposal in the central city is that St Michael and All Angels, St Mary’s Addington and St Luke’s-in-the-City should merge into one ministry unit.

Their gothic masonry church has already been demolished – and the proposition is that the parish territory be redistributed between St John’s Latimer Square and St Michael-and-All Angels.

That particular plan has an impact, too, on St Mary’s Addington, which is a thriving LSM unit and does not want to go back into vicar-led ministry. The suggestion is that a retreat and spirituality centre for the diocese could be constructed alongside that church.

The majority in favour of receiving the SRG report was decisive.

But the support wasn’t unanimous.

Some at the synod – particularly those who feel their identity is threatened – complained about lost autonomy, pressure, speed of the process and loss of diversity.

“We don’t live in a culture,” said one, “where we have arranged marriages.”

A number of amendments were proposed late in the debate.

Some found their way into the resolution. Others – such as an amendment proposed by the Rev David Moore, the Vicar of St Lukes-in-the-City, which sought a guarantee that no parish would be forced against its will to accept a scheme – did not.

Bishop Victoria ruled that one out of order, saying it would render the diocese unable to move.

John Day is keen to stress that the SRG proposal is not about creating mega-churches.

Rather, he said, the idea is to have “multi-congregation parishes where ministry units bring their different styles and strengths to the task of mission.”

Nor does the SRG pretend the process it is recommending will be pain-free. In its report it wrote: “The SRG is very conscious of the uncertainty and sheer weariness of Cantabrians, and aware that it is difficult to make changes in such circumstances.

“Nonetheless, it is important that as a Diocese we make these hard decisions.”

No time to waste

Bishop Victoria spoke in her charge of the need to make decisions. She referred to the workers who will flood into the city to work on its rebuild, and asked whether the parishes would be ready to reach out to them:

“Remember, not to decide is to decide, and the longer we take to decide questions about a diocesan map, the less energy we will put into helping our neighbours.

“It makes you wonder, doesn’t it? Will we fight over parish boundaries – or reach out to the newcomer in our midst who is wondering what sort of community this place called Christchurch really is?”

Part of the challenge, says John Day, “is that we are being invited to think beyond the confines of our parish boundaries, and to begin to minister as the Diocese of Christchurch gathered around our Bishop.”

And in that regard, the SRG process appears to have been significantly successful.

The motion to receive the SRG proposals was put by Lyndon Rogers, and seconded by Moka Ritchie:

“I suspect,” she said, “that we have talked more to each other more in the last six months, than we have done in the last 50 years.”

[1] That’s excluding the inevitable shortfall between the insurance payout for the ruined cathedral – estimated at $30 million – and the cost of building whatever takes its place.

• Full resolution on the strategic review