More than 1000 people packed ChristChurch Cathedal on Saturday to embrace Canadian Victoria Matthews as the eighth Bishop of Christchurch. 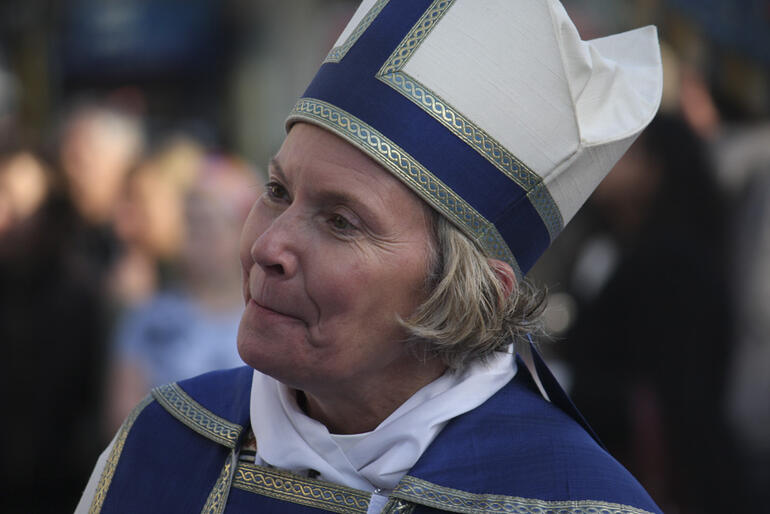 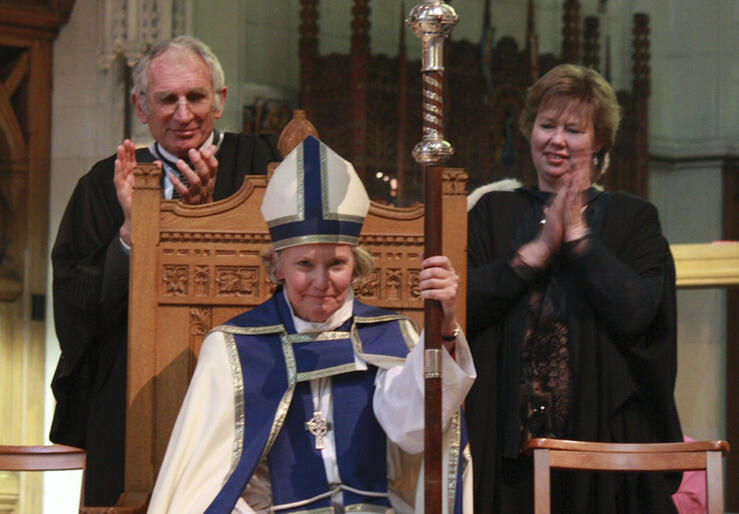 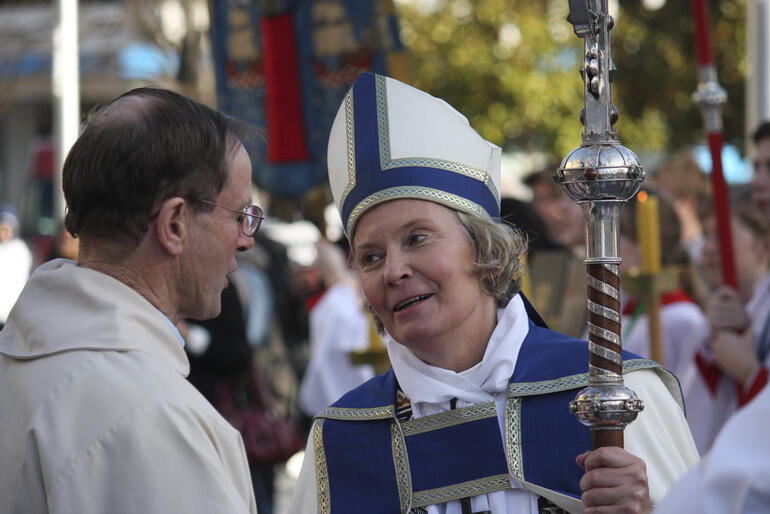 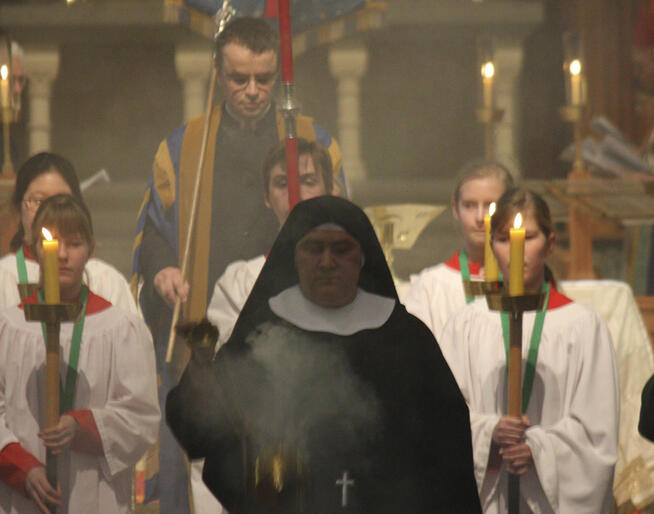 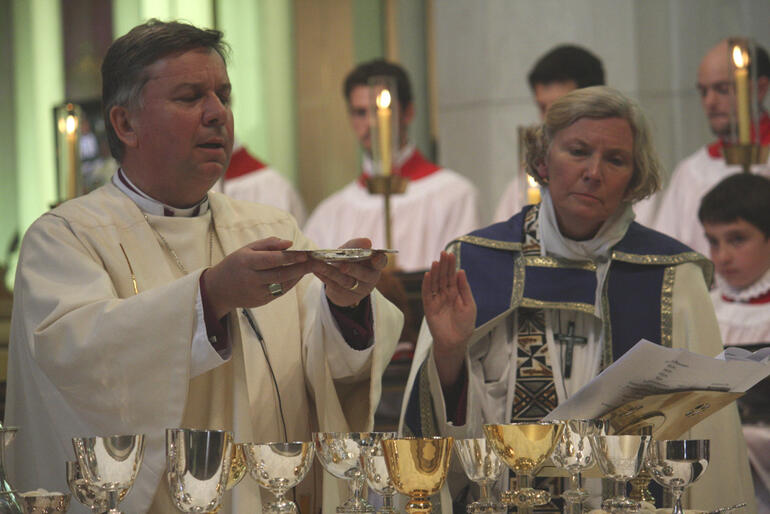 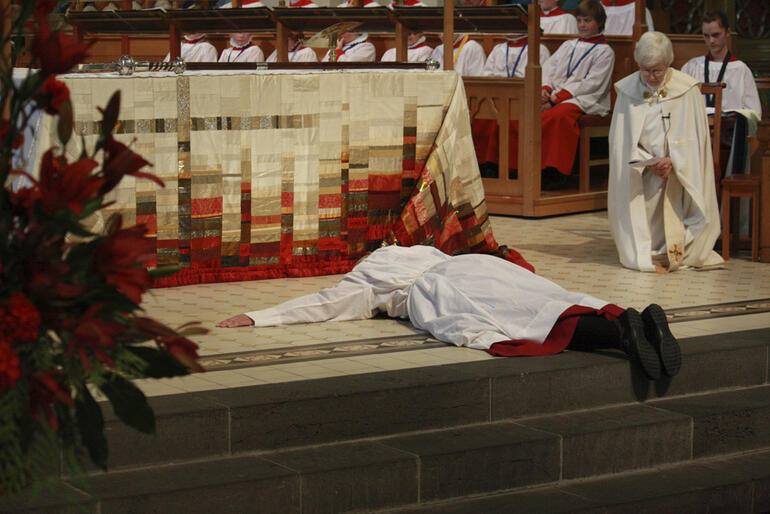 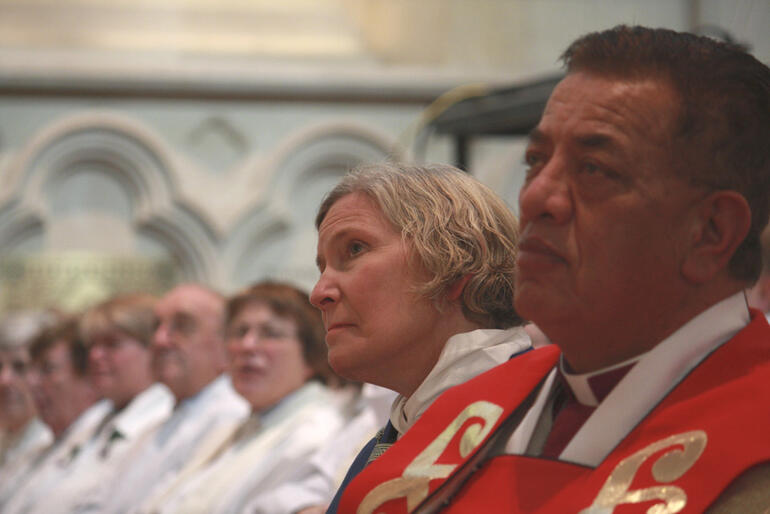 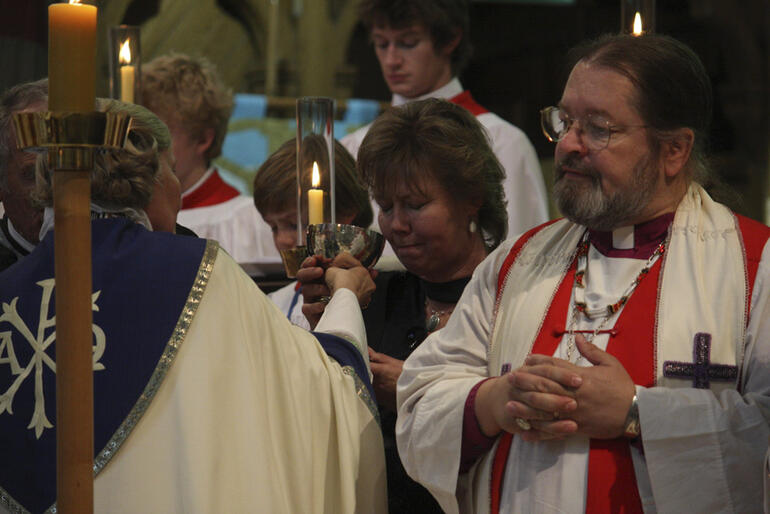 When last Saturday afternoon’s installation service for Bishop Victoria Matthews as the eighth Bishop of Christchurch was finished, the woman who’s taken her place as the new Bishop of Edmonton reflected on Canada’s loss and Christchurch’s gain.

Bishop Jane Alexander spoke softly of a loss that feels personal, as well as provincial: “It was very hard,” she said, “to give Victoria away.

“But I will leave here with my heart lightened. So many have told me that they will love her and take care of her.

“The installation service was beautiful. There was such a strong sense of family. So much welcome. Victoria is not coming home: she is home.”

While none but the three Canadian bishops present could truly know about the loss Bishop Jane spoke of, there were close on 1000 people – it was a full house at the Cathedral on a sunny, still, late winter’s afternoon – who saw signs, right from the start of the service, of where their gains might lie.

Bishop Victoria and her supporters were the last to enter the cathedral. Her supporters included folk whom you’d expect to be there: her lay and clerical nominators, the visiting Canadian bishops and, of course, Te Pihopa o Te Waipounamu, Bishop John Gray and a small ope representing his hui amorangi.

But they weren’t the only ones. Bishop Victoria’s chosen whanau included other special folk: special needs folk, in fact, from the IHC.

We saw more signs of her desire to reach out during communion itself. With such a throng gathered for the service, there were various stations where bishops and clergy administered the sacrament. Bishop Victoria herself chose to give communion at the west porch, just inside the cathedral’s front doors.

But that’s where she departed from the normal script: she went out those great doors into the Square itself, and offered communion to passers-by – several of whom responded.

There was evidence too, of a warm willingness to embrace culture: from the mihi whakatau provided by Ngai Tahu and Maurice Gray, and the response and welcome from Bishop John Gray, through to the contributions and gifts from Tikanga Pasefika.

Mother Keleni, the Tongan-born Superior of the Community of the Sacred Name, gave the first reading, and at afternoon tea after the service Bishop Winston Halapua told how there are people scattered on islands across the Pacific who know Bishop Victoria’s name and who are praying for her.

Then there was the sermon itself preached by Bishop Mark MacDonald, the National Indigenous Bishop of the Anglican Church of Canada. He said this southern province had long been an inspiration to indigenous people in his country and coming to Christchurch was, for him, like being a Beatles fan making a pilgrimage to Liverpool.

There was dramatic evidence, too, of a leader who chooses to lay down her life to serve her Lord: at the beginning of the actual installation, Bishop Victoria took off her cope and prostrated herself before the altar. There she remained, face-down on the tiles, arms spread wide, for two or three minutes.

During those moments there was no music, no singing, and no movement. No shuffling even, no throat-clearing and not even any coughing in that great space: just the sun arcing down from the clerestory windows on Bishop Victoria’s prostrate form.

That palpable sense of the numinous didn’t begin or end there, either. Carole Graham, Christchurch’s Vicar-General, summed it up simply but eloquently:

“There was a tremendous sense of the presence of God with us, and of thanksgiving to God for giving us this person. You can feel the excitement: I think everybody feels upbeat and uplifted. There’s a sense of a new journey with her and with God.”

There was a sense of pride, too – pride in being Anglican Christians, a gratitude for being able, on good days, to celebrate, to worship, and to give glory to God in a uniquely rich way.

Helen Wilderspin, visiting from Dunedin where she’s the acting Vicar-General there, was one who felt that: “It’s great,” she said, “when we can show ourselves off a bit as Anglicans.”

And as Bishop Victoria herself noted in a short speech at the after-match afternoon tea at the Millennium Hotel, there was cause for thankfulness that the Anglican Communion is still just that – a catholic, worldwide Communion which recognizes that a bishop ordained in a province on the other side of the world can be chosen to serve in the Diocese of Christchurch.

Peter Beck was the MC for those Millennium speeches, and the man who played a key role in orchestrating the installation service itself. As you can imagine, he was chuffed with the way things had gone, too.

“It’s been just amazing from beginning to end, from the time of the Electoral Synod till now. I’ve had no worries about the service, because God’s hand has been on this all the way through.”

Richard Tankersley, who is on the diocesan standing committee, and a diocesan representative to General Synod, rounded off the speeches with an impromptu thanksgiving of his own.

He spoke of his gratitude to all the people who had kept the diocese running smoothly from the time of Bishop David Coles’ retirement until the arrival of his successor.

“Something enthralling is happening here,” he mused afterwards. “We’ve been a diocese in anticipation for these last six months. And this afternoon, we’ve begun to sense its fulfillment.”

And finally, there can have been few who would not recognize the faith and simple courage of Christchurch’s new bishop, who now steps from the familiar into the unknown.

She has come alone; and she can depend on no one and nothing familiar. Yet her trust in the God whom she believes has called her to Christchurch is obvious.

In that light, the words of the first reading of the day (Isaiah 6: 1- 8) seemed telling: Mother Keleni retold the story where Isaiah has a vision of the Lord, high and lifted up.

Isaiah is undone by this vision, stricken by his unworthiness – until an angel touches his lips with a burning coal from the altar, and declares his sins wiped out. In verse 8 Isaiah continues:

And then I heard the voice of the Master