He will come from London to be the next Bishop of Dunedin - but Steven Benford is no stranger to the city.
• Video: Archbishop Philip meets Bishop-elect Steven and Lorraine 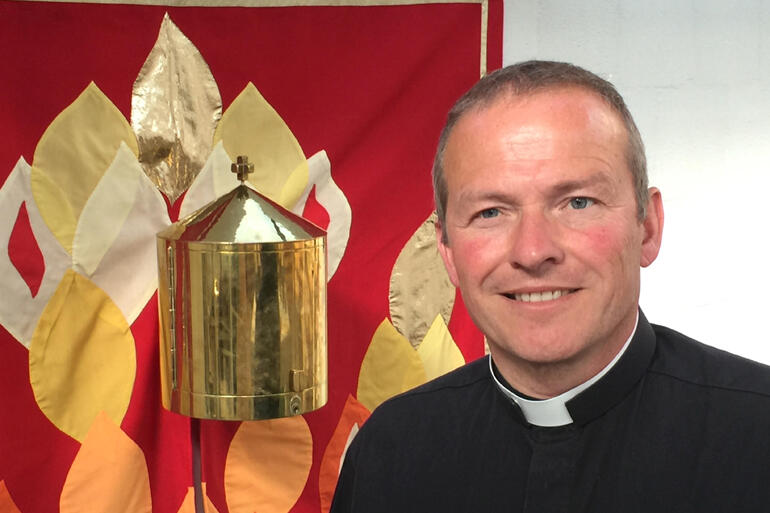 Archbishops Winston Halapua and Philip Richardson have announced the election of the Rev Dr Steven Benford as the next Bishop of Dunedin.

Bishop-elect Steven, who is 56, currently serves as vicar of St Joseph the Worker, Northolt, in the Diocese of London, where he is also a Bishops’ Advisor for Ministry, a new incumbents’ ministry mentor and spiritual director.

The archbishops today confirmed Steven Benford’s election, which has been ratified by General Synod, after he was nominated by the Diocese of Dunedin’s Electoral College held from May 26-27.

It is an appointment which signals a return to New Zealand for the qualified doctor who worked in Otago in the early 1990s. His wife Lorraine was born in Dunedin.

“I look forward to welcoming Steven back to Aotearoa New Zealand.”

“His experience of balancing vocations in the service of others will be invaluable as he leads the clergy and people of Southland and Otago to develop creative ways of serving their communities in the Spirit of Christ.”

Archbishop Philip recently met with Bishop-elect Steven in London. The new bishop describes himself as a ‘people person’.

“Steven is a very warm and engaging priest with a heart for mission,” said Archbishop Philip.

“He will be sadly missed in Northolt, whose people speak highly of his leadership, hard work and creativity.”

Steven Benford’s career has been shaped by a dual vocation to ministry and medicine.

For 29 years he served as a medical doctor, specialising in anaesthetics since 1990.

Steven’s medical career initially took him to Leicester, Leeds and Gibraltar. Then in the early 1990s, he and Lorraine – who grew up in Gore – brought their young family to live in southern New Zealand.

From 1991-95 Steven worked as a GP in Oamaru, where he also established a free clinic. Over those years, he kept his hand in hospital-based medicine, working one day a week at Dunedin Hospital. In the family’s last six months in New Zealand, Steven served in the emergency department at Tokoroa Hospital.

Despite his love of medicine, Steven felt God’s insistent call to the ordained ministry from a young age. In 1996, he entered the ministry discernment process in the Diocese of York and was ordained there in 2000. In his first four years as a priest he served as a curate in a three-church rural cluster, while remaining a full-time specialist at Friarage Hospital, Northallerton in Yorkshire.

In 2004, Dr Benford reduced his hospital hours to half, to begin ministering as a half-time priest in the York city parish of St Luke, where he remained for 10 years, before entering full-time ministry as vicar of Northolt. In York, he supported dozens of candidates for lay and ordained ministry, and was appointed a diocesan lay ministry selector. He carries that passion for encouraging and developing vocations into his new episcopal role.

Steven’s Christian faith has led him to serve others using his medical skills. As well as his 19 years in rural health at Northallerton, in 2003 he travelled to Baghdad to work with a medical NGO after the allied invasion of Iraq. Later, he joined medical teams in Haiti, following the devastating earthquakes in 2010 and 2014.

Steven believes his faith gave him perspective in his work as a doctor.

“I never viewed any person I was treating as a condition, or as a problem to be sorted out,” he says.

“Someone might be in crisis because of their own mistakes, or because of what others have done to them, but they still have a past, and a future, and they are beloved of God.

“My faith helps me recognise the crisis as only one moment in the story of a whole life.”

Steven looks forward to coming back to Otago and Southland, which he remembers as the most beautiful part of New Zealand. He comes to the diocese with commitment to find where God is already at work, and to look for where the church is offering loving service to the community.

“My question is: ‘How much is the church seeing itself as serving the community in which it is placed?’” he says.

“That might be in the form of foodbanks, care for the homeless, or even offering practical help to people on farms and in neighbourhoods where our churches are located.”

“I think our challenge is to engage in the love Christ has for the world, and to make that real in the community.”