Holding a life in God's hands 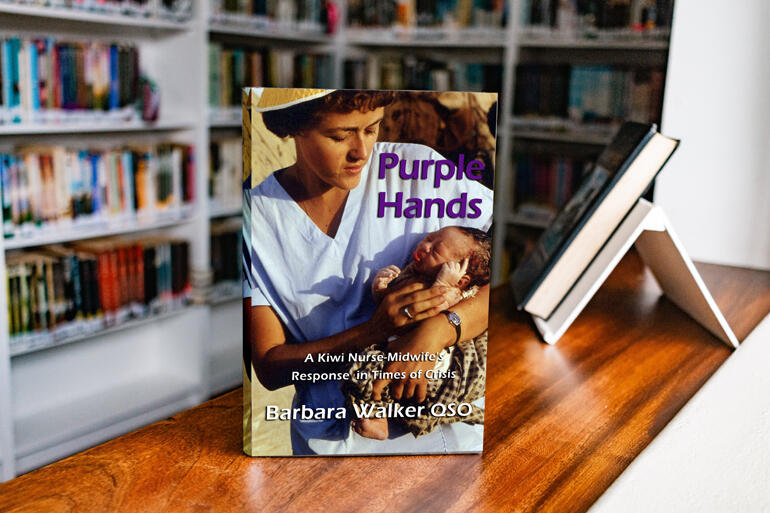 As I turned the pages of Barbara Walker’s autobiography ‘Purple Hands’, I could not help but wonder how much an ordinary woman could fit into one life.

Barbara Walker QSO has been a nurse, a midwife, an international aid worker, a first responder, a scholar, a priest and a hospital chaplain. Her life of listening to God’s will has taken her from New Zealand to Africa to Asia and back again to Aotearoa. She has served her vocation in some of the most challenging situations any person has to face.

How could anyone go so far and achieve so many different things in one life I asked?

Then I recalled that this Kiwi woman born into a loving family believes in an extraordinary Lord. In her autobiography, Barbara Walker recalls how she received the words given to her as a young woman: ‘The one who calls you is faithful, and He will do it.’ (1 Thessalonians 5:24).

The book tells how Barbara Walker’s desire to serve God and God’s people first led her into nursing.

A major hurdle came early on when she was rejected as a missionary nurse, but it didn’t take long before she was accepted as an aid worker with World Vision.

Barbara went on to witness the outfall of some of the most traumatic events in latter 20th century history, as she worked with refugees in Cambodia and in several countries across the African continent. Whilst working in Tanzania, she coordinated care for people living and dying with HIV and AIDS. In one part of the book, she tells the story of how she witnessed the bodies of people slaughtered in the Rwandan genocide floating down a river as she passed.

Due to a constant lack of personnel and equipment in the many areas where she worked, Barbara was frequently forced to adapt to new circumstances and learn new skills to meet the urgent practical needs around her.

She helps us picture the conditions under which she became an anaesthetist, performed eye surgery, educated local staff in health care techniques and even at one time manufactured incubators.

In another section, the book recounts the time Barbara arrived among the first responders to a disaster, where she had to live in a tent with only plastic to sleep on between her and the ground.

Readers will enjoy discovering where the title of the book comes from. Like all of Barbara’s accounts, the story of the purple hands demonstrates how she responded to the challenges before her with a characteristic touch of humour added to her retelling.

Later in the book Barbara shares openly how her commitment to offering others care had a negative impact on her health, and how she had to come to terms with the exhaustion, pain and mental distress her experiences left behind.  In this, she is quick to rejoice in those who gave her support and encouragement.

Although Barbara was frustrated by her difficulty in learning new languages, she didn’t use this as an excuse to avoid her call to work in new countries. Then later when she was diagnosed with dyslexia whilst studying for a Masters degree, she modelled how to rise to that challenge too, seeking support and working hard to overcome her limitations.

Barbara finally returned to New Zealand after she received death threats while working in Mozambique.

Once home again, she adapted to the challenge of working in a health setting in Hokianga, where she could once again draw upon her unique set of skills.

But returning to Aotearoa also meant returning to new regulations and new rules of nursing practice that meant Barbara could see the path she had been on for so long was no longer where she should be.

So she turned to seek God’s plan for her life, and answered the call to ordained ministry. From there she moved back into the medical world that had been so much part of her vocation – this time into hospital chaplaincy, where she remains today.

While Barbara has not sought acclaim, she has been honoured in various ways, including receiving the Queen’s Service Order.

This book will challenge you. In its pages you will find stories of terrible suffering and great love.

It also gives a glimpse into the possibilities that can open up when a person works in obedience to God’s will.

This book leaves no doubt that Barbara has demonstrated great faithfulness to her call. I suspect like me, you’ll be left wanting to know more.

Reviewed by Elaine Tyrrell QSM (MHealSc, BSc, BN, RN Comp), a registered nurse who was one of the founders of the Faith Community Nursing movement in Aotearoa New Zealand.

PURPLE HANDS: A KIWI NURSE-MIDWIFE’S RESPONSE IN TIMES OF CRISIS