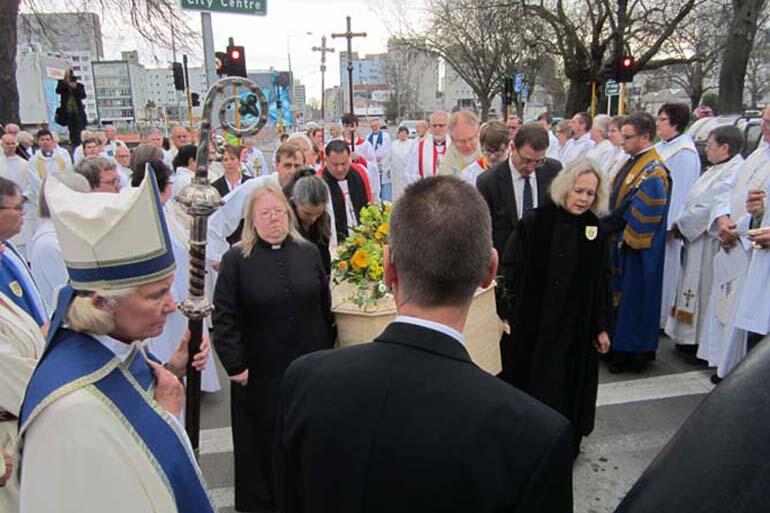 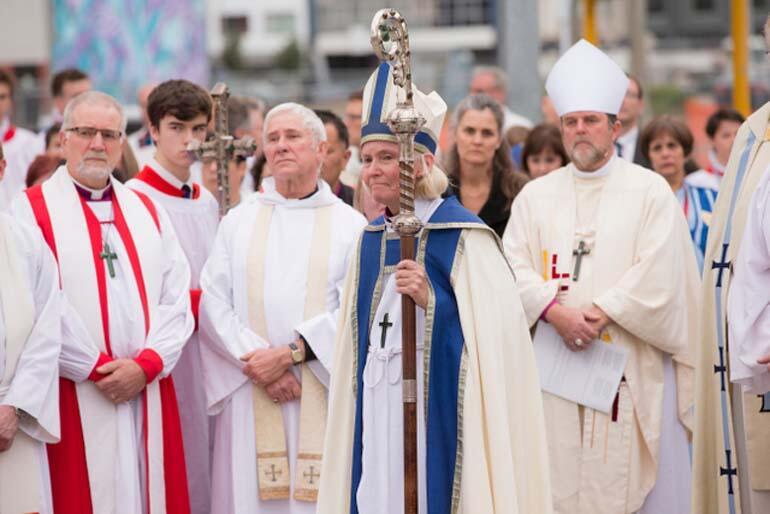 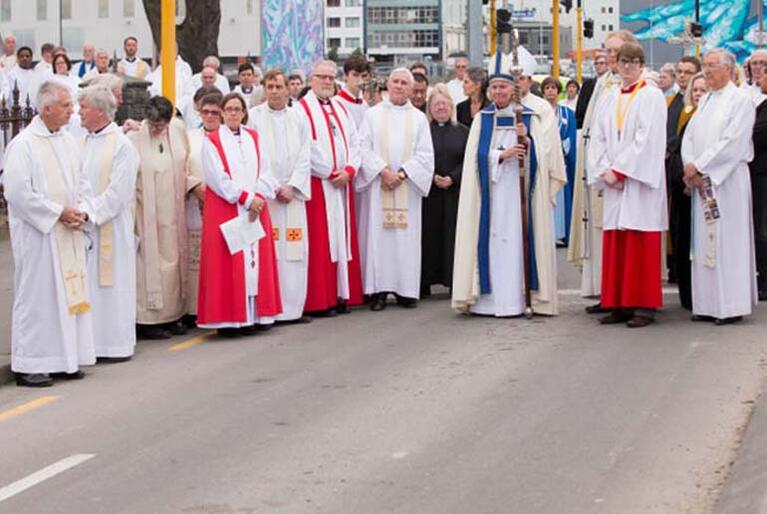 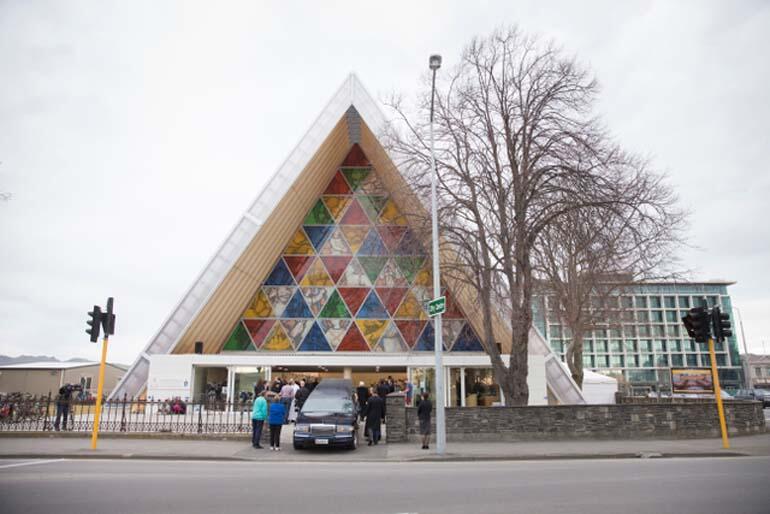 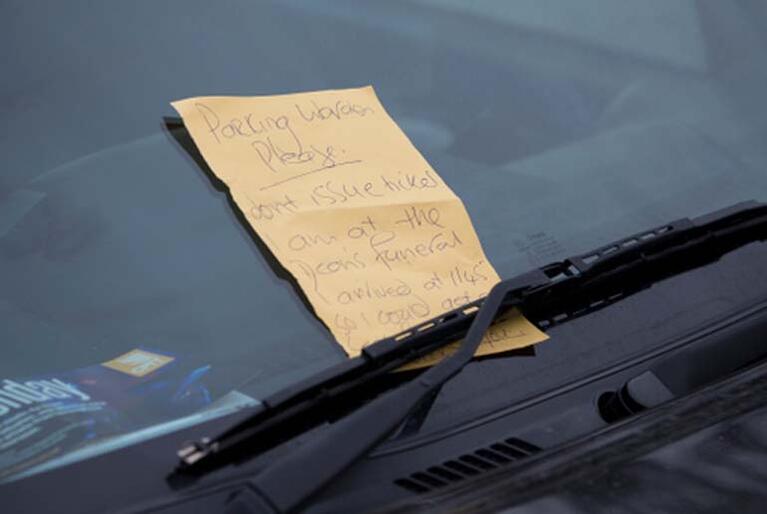 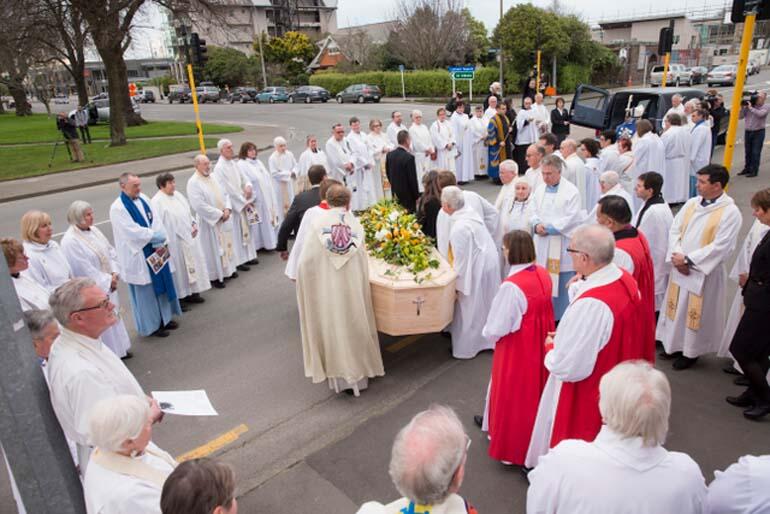 Lynda died at home of natural causes on Sunday, July 20, after a short illness. She was 40.

Archbishop Philip Richardson presided at the Eucharist, while Bishop Victoria preached the sermon.

Among the 200 clergy robed in resurrection gold and white were deans from every Anglican cathedral in the country.

“She had such an ability to combine lightness and humour with immense depth. All in one sentence,” said Helen-Ann.

“I’m reminded of G.K.Chesterton who said:  Angels can fly because they take themselves so lightly.

Many people spoke warmly of Lynda’s humour. Cathedral Lay Canon Margaret Neate says that was the way Lynda upheld others.

“After the earthquakes she was like the glue that held us together.

“She knew everyone well and she knew just the moment to laugh with us or pray with us.”

Lay Canon Yvonne Densem agreed. “Even in our darkest hours she made us laugh.”

Lynda left her people with a chuckle today, but that came later in the service.

The Gospel, Mark 16: 1-8, was read by the former Dean, the Rev Peter Beck, who had worked closely with Lynda after she was appointed to Christchurch in 2006.

The choir hasn’t sung it for six years, since well before the earthquakes. That’s when Lynda decided she wanted it for her funeral.

It took the choirboys a week to get up to speed, but Brian says "it was what Lynda wanted, so we were happy to offer it.”

Clergy flew in from Nelson, Auckland, Wellington and Australia and from across the lower South Island.

The Rev Shelley Walker (Rakaia) saw the high turnout as a sign of the high esteem so many held for Lynda. She remembers Lynda’s impressive intellect, her scholarship and her skill of making theology available in a down-to-earth way.

Lynda’s final joke was shared by Bishop Victoria in her sermon.

Often clergy would phone Lynda in a panic before Bishop Victoria was due to visit. What should they say about today’s first lectionary reading, if asked?

Lynda would recommend they reflect on the golden mice and tumours, from 1 Samuel 6: 1-18.

That lengthy and inexplicable story – read by Paul Kennedy, Headmaster of The Cathedral Grammar School.– headed up the Ministry of the Word today’s liturgy. And as Bishop Victoria later discovered, it was also the first reading for today’s morning prayer.

To complete the farewell, Lynda’s body was carried the length of the cathedral as the choir sang Stanford’s Nunc Dimittis, “Lord now lettest thy servant depart in peace according to thy word.”

Lynda was carried from the cathedral through a guard of honour formed by over 100 of her brother and sister clergy.

As the Nunc dimittis came to a close, an unscheduled karanga called out – sending her homeward to her ancestors.

As the crowd of priests watched the hearse move out of sight some held on to one another in their grief. Then, as the car disappeared, the opening chords of Widor’s Toccata rang out with the joy and hope of the resurrection that Lynda’s life had proclaimed.

The Rev Dr Peter Carrell, Director of Theological Education in Christchurch, said later: "We may not see her like in our lifetime again – she combined Irish wit and intellectual brilliance with a rare gift of communicating profound truth in everyday language...

"The brilliance of the music chosen by her for the service became a tribute to her own brilliance."

Later this week Bishop Victoria will travel with two others from Christchurch to return Lynda’s body to the family home in County Down, Northern Ireland, where her funeral will be held in Dromore Cathedral.