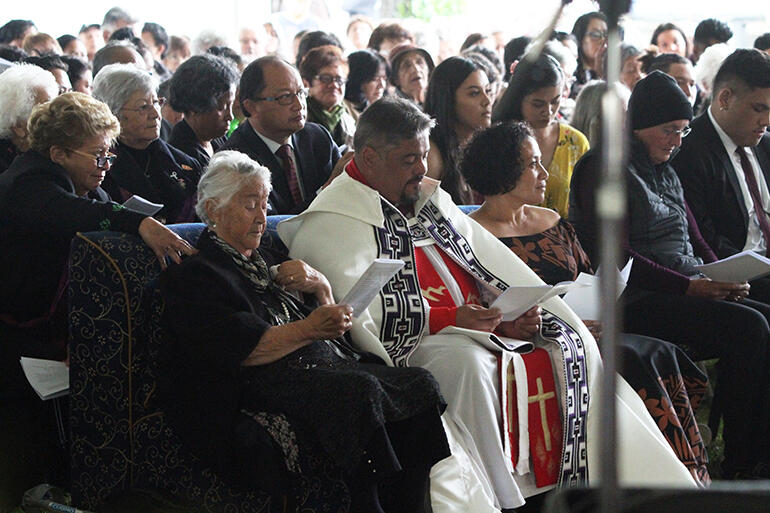 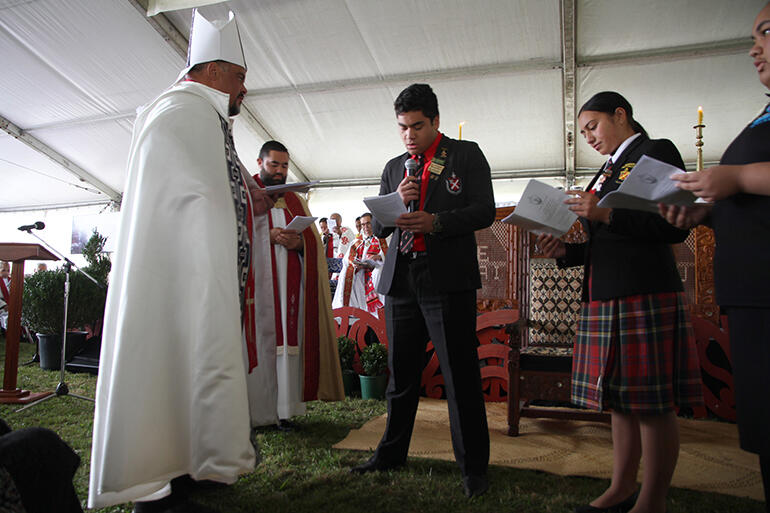 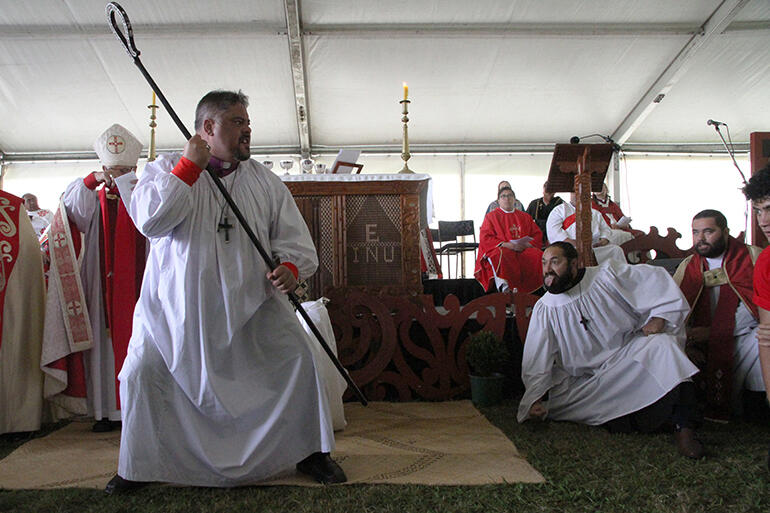 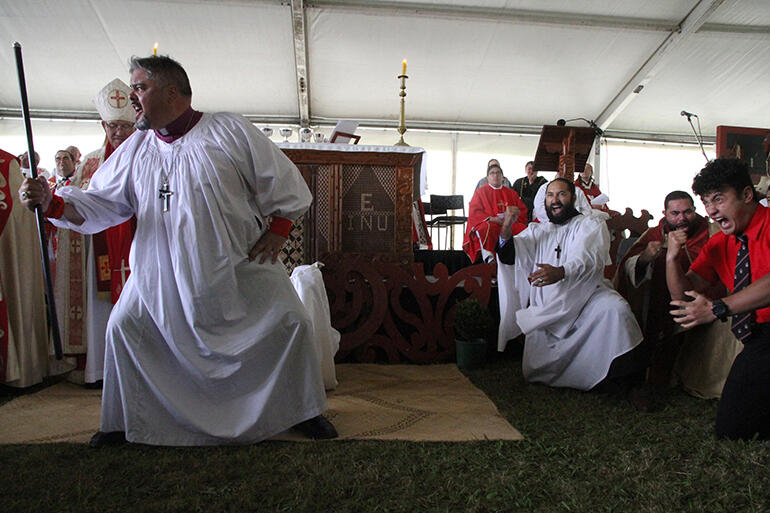 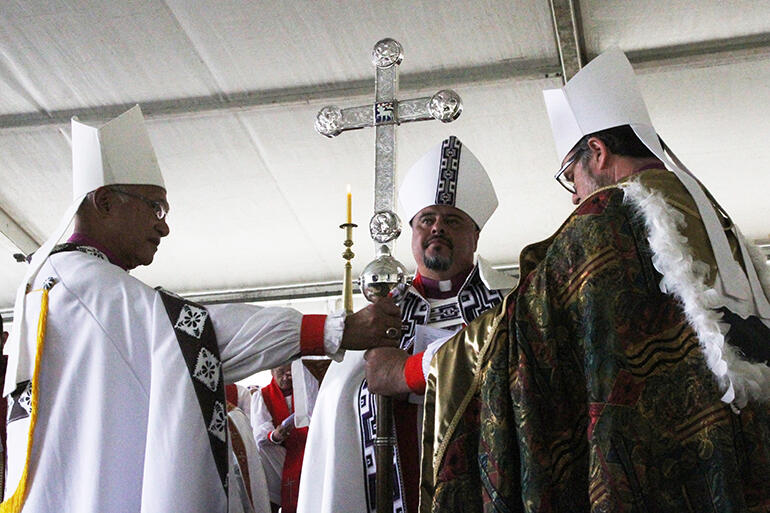 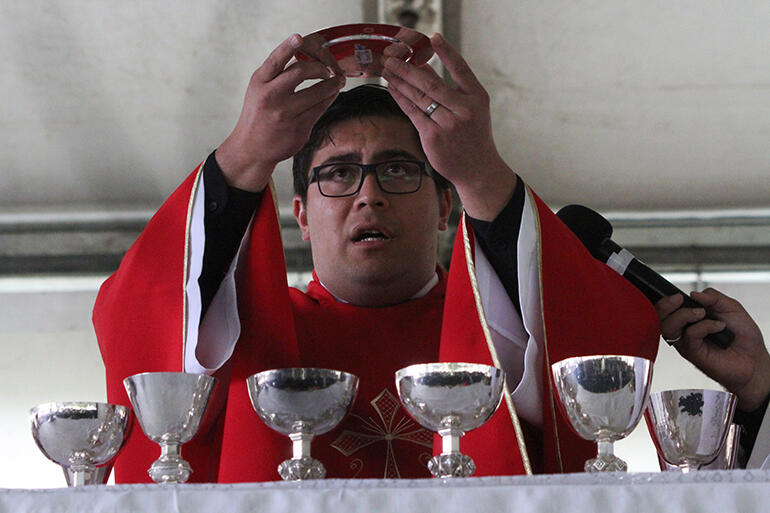 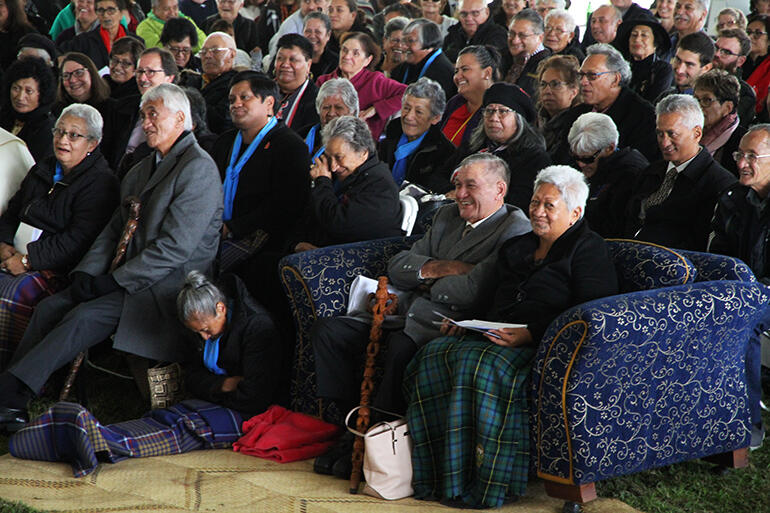 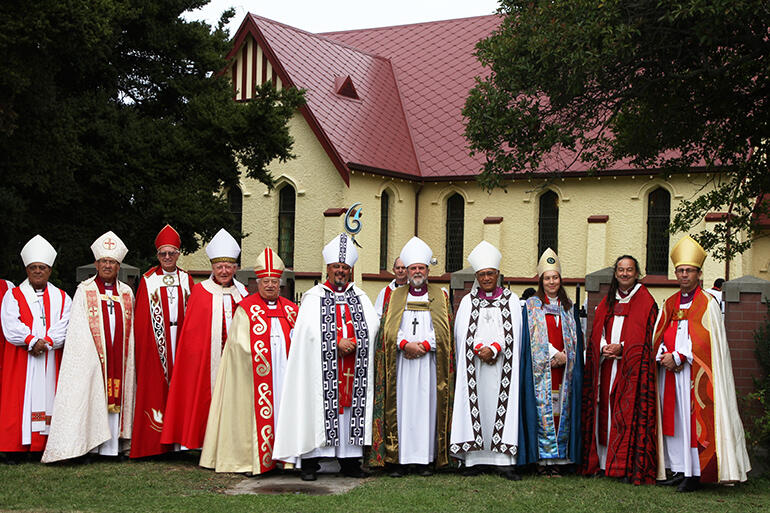 About 750 people poured into a huge marquee at Manutuke marae, west of Gisborne, yesterday to tautoko the installation of Bishop Don Tamihere as the sixth Pihopa o Aotearoa, or leader of the Maori Anglican Church – and to applaud his recognition as Primate/Te Pihopa Matamua and Archbishop of the Anglican church in these islands.

Bishop Don, who is 45, thus becomes the youngest archbishop in the worldwide Anglican Communion – and the service he oversaw demonstrated his determination to throw open the doors of Te Pihopatanga to young leaders and fresh initiatives.

He chose to be installed in his cathedra not by other bishops, but by three students from Maori schools: from Te Aute Kareti and Hukarere Maori Girl's College (both venerable Maori Anglican boys and girls colleges) – and from Horouta Wananga, which is a new kura kaupapa Maori, or Maori immersion school, in Gisborne.

Then, to underline the 'new wine, new wineskins' message, he chose the newest, most recently ordained priest in Te Pihopatanga to preside at the Eucharist. The Rev Wiremu Anania, who is Vicar and Missioner of Tauranga Moana, is aged 24, and he was ordained to the priesthood just three months ago.

This being a Tikanga Maori occasion, there was honour extended too, to the kaumatua and kuia who have paved the way, and paid a price to maintain the mana of Maoridom.

Until the moment of his installation, Bishop Don sat between his wife Kisa – and whaea Mihi Turei, who is the widow of Archbishop Brown Turei, who died in January 2017.

Archbishop Don has therefore now succeeded Archbishop Brown not only as Anglican Bishop of Te Tairawhiti, the tribal district which covers the eastern seaboard of the North Island, but also as leader of Te Pihopatanga and co-leader of the three tikanga church.

And when the moment of his installation as Te Pihopa o Aotearoa had passed, Whaea Mihi and Kisa were the first ones he greeted.

Then, on the other side of the central aisle from whaea Mihi, there sat Kingi Tuheitia, the seventh Maori king, and his wife, Makau Ariki Atawhai, who travelled down from Turangawaewae in Ngaruawahia with their entourage for the occasion.

The Maori monarch's presence at yesterday's service is the first time a Maori king or queen has attended the installation of any of the Bishops of Aotearoa[1] – and next Sunday, Archbishop Don will return the honour.
General Synod convenes in New Plymouth of Friday May 4. Two days later, Archbishop Don will lead three busloads of synod members on a hikoi from New Plymouth to Ngaruawahia, where they will attend an ecumenical service of thanksgiving to mark the 160th anniversary of the Kingitanga.

Archbishop Don will preach at that service.

Yesterday's installation also underlined the first principles of Te Pihopatanga in another way.

The Rev Dr Hirini Kaa preached the kauhau, or sermon, and he gave a detailed recounting of the whakapapa of Te Pihopatanga. He painted a picture of a truly indigenous movement, of a 'vine' that was growing robustly before the arrival of the European settlers, to which the Good News was grafted, and that hybrid vine – te reo Maori me ona tikanga[2] enlivened by the power of the Gospel – flourished.

In fact, said Hirini, Maori were almost exclusively responsible, in the first decades of the 19th century, for spreading the Good News among their own people. In those early years, he said, Maori evangelists far outnumbered colonial evangelists – sometimes by 10 to 1.

Likewise, said Hirini, the Pakeha Bishops and General Synods did their best "to separate Maori Anglicans from the vine", thwarting their pleas to have their own Maori bishop.

Only in 1928 – after the Pakeha bishops had excommunicated the thousands of Maori Anglicans who were now following the Maori prophet and healing evangelist TW Ratana – did the General Synod reluctantly consent to the establishment of a suffragan Maori bishop, answerable to the Bishop of Waiapu.

Bishop Frederick Bennett became that first Pihopa o Aotearoa, and Archbishop Don is the sixth bishop to carry that mantle.

Archbishop Don is heir, too, to the revised constitution of the Anglican Church, which came into effect in 1992, and which seeks to release Maori into the flourishing which which had been guaranteed to them by the Treaty of Waitangi in 1840, and which they they had so long sought in the decades since.

Don Tamihere was born in Gisborne in 1972 and grew up on the Coast.

In 1997 he began studying for the priesthood at St John’s College.

He left there in 2001, equipped with a Master’s degree in theology – and taught first at the Tairawhiti taapapa and, more recently, as Tumuaki of Te Rau College.

He was nominated to succeed Bishop Brown Turei as Te Pihopa o Te Tai Rawhiti in October 2016, and ordained and installed as the second Bishop of Tairawhiti at Waiomatatini Marae, on March 11, 2017.

He was then nominated as Pihopa o Aotearoa at Te Runanganui in September last year – and declared elected to the leadership of the Maori Anglican church in March.

Archbishop Don and his wife Kisa have three children: Tiana, 22; Danielle, 19; Ethan, 17 – and they also share their life with their nephew Toka, who is 19.

[1] The second Maori King, Tawhiao (1860-1894) had declared E toru nga taonga kei te kapu o toku ringa. 'There are three treasures in my hands' which he intended to use. (He went on to speak of the Wesleyans, the Catholics and the Anglicans).