The Old Testament story of Naboth's Vineyard is about a man who refuses to sell his inherited land to the king. So his queen has Naboth stoned, and dogs lick his blood. It's a story missionaries reached for when they tried, and failed, to save the iwi land on which downtown Tauranga is built.
• The General Synod apology to the Tauranga Moana hapu
• Naboth's Vineyard: the Reese report
• The day General Synod said sorry - a report 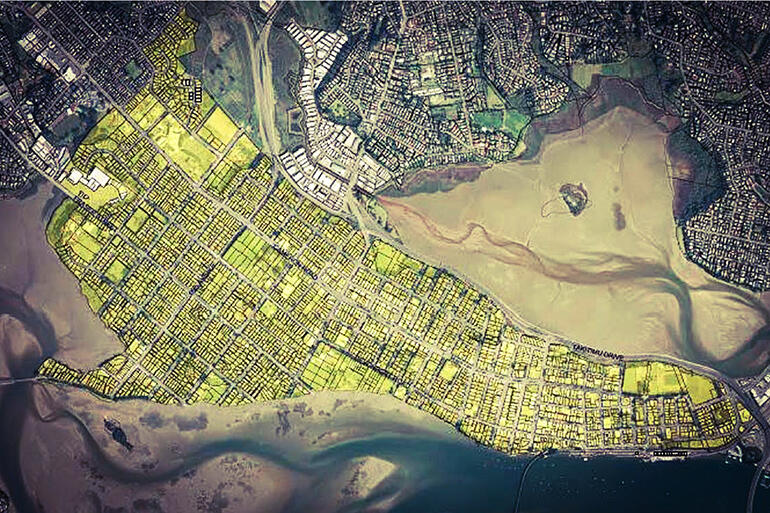 "It is as though it were yesterday."

A Ngati Ranginui kaumatua's response[1] when he was asked in 2007 about his recollections of the deprivations suffered by his people in 1866.

Next Monday, leaders of the church will take the next steps in putting right the consequences of a decision by a 19th century Anglican mission society which stripped Tauranga Moana iwi of their ancestral land and threw them into poverty.

It was a decision made in 1866 by the then Church Missionary Society[2] (which is not connected to today's NZCMS) to give more than 1000 acres of tribal land to the colonial government, without the tribes' approval.

That land, which is known as the Te Papa block, is the land on which downtown Tauranga now stands.

It was sold to benefit the tribes – so the missionaries could set up a school, for example, and teach iwi modern agriculture and horticulture – as well as to give CMS a land base on which it could survive and develop its mission.

It wasn't sold to build a city.

The missionaries knew that they held that whenua on solemn trust. They knew too, that if their purposes for the land ever changed, it was to be returned to the tribes[4].

In fact, the historian Dr Alistair Reese[5], author of the report: 'Te Papa: Naboth's Vineyard? Towards reconciliation in Tauranga Moana', has shown that CMS bought far more land than it needed – so it could act as a bulwark for iwi against "unrestrained and unamenable colonisation."[6]

Time and again, CMS resisted pressure to sell the Te Papa land to the colonial government – who wanted to subdivide and sell it on to land-hungry settlers.

But the pressure to sell only mounted as tensions between the iwi and settlers grew – and especially so after the Battle of Pukehinahina (Gate Pa) in April 1864.

Still CMS proclaimed its obligation[7] to safeguard the land.

It referred to the Te Papa block as 'Naboth's Vineyard', after the Old Testament story[8] about Naboth, a poor man who was stoned because he refused to sell the land he'd inherited to King Ahab.

Without consulting the iwi, the CMS land board decided in March 1866 to make a 'very liberal'[9] offer of giving four fifths of the 1333 acres it had acquired to the government – in the hope that the remnant (about 260 acres) might translate into a "substantial endowment for the native church."

That 1866 decision sounded the death knell to the CMS mission to Tauranga Moana iwi.

After that, says Archbishop emeritus Sir David Moxon, "Maori fell away. The tribes we're working with now went to other churches – or to no church at all."

That failure, ironically, may have put the remaining one fifth of the Te Papa block in further jeopardy.

Because almost all of it was sold – and almost none is now in tribal ownership.

The steps to be taken next Monday are the first outworking of a formal apology which was read at this year's General Synod by Archbishop Philip Richardson to a small ope representing the two hapu.

Next Monday, Archbishop David, the Bishop of Manawa o te Wheke, Ngarahu Katene, and the Bishop of Waiapu, Andrew Hedge, and others will explain to Tauranga city councillors why the apology is being made – and that will be followed by an evening hui at Baycourt in which the bishops, iwi leaders and Dr Reese will then explain to the public why they are convinced it is necessary.

And on December 1, that apology will be read again in English and Maori[10], to a massed gathering of the tribes on their own turf – or at least, on one of the few fragments of their whenua which might yet be returned to them.

Archbishop David became involved in this issue last year at the request of Archbishop Philip[11]. Archbishop Philip asked him to liaise with both the Otamataha Trust – which represents Ngati Tapu and Ngai Tamarawaho – and with various Anglican parties, including the bishops of Waiapu and Manawa o Te Wheke, and the modern day NZCMS.

Archbishop David says that although NZCMS is in the loop, it can't be held accountable for the actions of the 19th century New Zealand CMS Lands Board – because it's a different creature.

"The legal respondent", he says, "no longer exists."

Archbishop David – who was himself the Vicar of Gate Pa from 1981 to 1987 – says church and Otamataha Trust leaders will sit down after the December 1 apology to "work out a strategy that is appropriate both to the tribes, and to the General Synod Standing Committee."

They will consider, he says, making an approach to the Crown "because the Crown put undue pressure on the CMS Lands Board, and because it was the needs of the Crown which drove this.

"If they'd been left to their own devices, the CMS wouldn't have yielded the land.

"So, in one way or another, the Crown are a highly engaged party."

"Then, there is the second question, of what the church itself should do.

"Because although the church was not the perpetrator, or the reason of the yielding of the land, and probably didn't think it had much choice – it nevertheless did yield the land.

"And crucially, it didn't fulfill the fundamental moral obligation placed on the church: that if you are going to do something different than what iwi gave or sold the land to you for, you must consult with them."

"So, we've got ourselves a moral error, in the 19th century – which we need to do something about."

In the first place, he says, there's that question of making an approach to the Crown.

In the second place, he says, the GSSC needs to talk with church trusts and bodies, both here and abroad – as it is empowered to do by the General Synod resolution – to find money to contribute to a "measure of restorative justice."

"And thirdly, we need to talk to the tribes about what positive project they would see as a sign of restorative justice – and we need to contribute towards that."

In that regard, he says, several projects which could be a sign of restorative justice in Tauranga city will be considered.

Archbishop David says he's aware that whatever moves the church makes in Tauranga will be "noticed by other people, in other parts of the country.

"But the question now is not: 'Who's right?

"The question is: 'What is right?'

[1] Colin Bidois, as recorded in January 2007 at a hui convened at Holy Trinity church, Tauranga.

[2] The present-day NZCMS is not connected to the 19th century CMS. That English-led body ceased to operate in New Zealand, and all its remaining lands were handed over to the New Zealand Mission Trust Board. NZCMS was set up in 1892 in a Nelson church hall.

[3] Ngati Tapu is a hapu, or sub-tribe of Ngai Te Rangi – while Ngai Tamarawaho is a hapu of Ngati Ranginui. Both tribes are part of the Tauranga Moana iwi group and share much in common.

[4] Traditional Maori understanding requires that land sold or given for a purpose must be returned if that purpose changes.

[5] 'Te Papa: Naboth's Vineyard? Towards reconciliation in Tauranga Moana' was included in this year's General Synod papers as a background report to Motion 14, The Formal Apology to Ngati Tapu and Ngai Tamarawaho of Tauranga Moana.

[6] From the journal of Archdeacon Alfred Brown, who negotiated the 1838 purchase of the land for CMS. As described in Naboth's Vineyard?

[7] In May 1864, Archdeacon Alfred Brown wrote to CMS "entreating the Society not to part with any portion of that land (Tauranga) unless the law compels the Society to yield it up." (Reece, P19).

[10] The apology will be read in English by Archbishop Philip Richardson, and in Maori by Bishop Ngarahu Katene and Archbishop David.

[11] A request since affirmed in the May General Synod resolution.