Honouring the servants who served

Midweek Eucharist at St John’s departs from the norm as the Dean of Tikanga Maori presents military medals to three students. 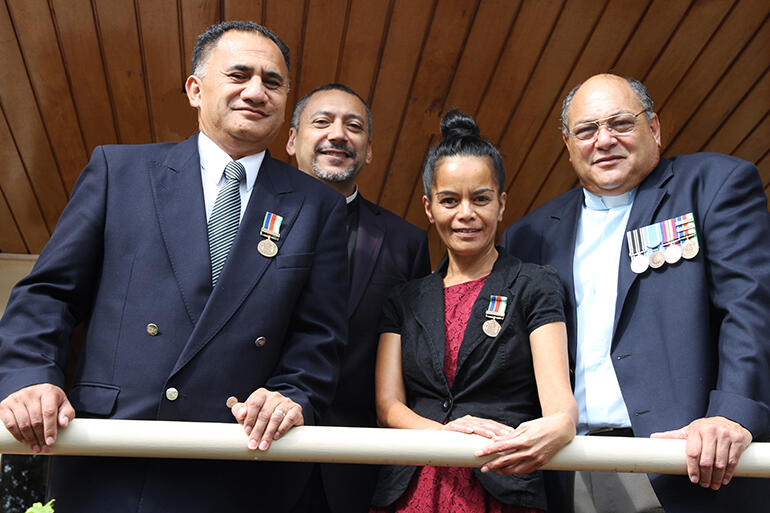 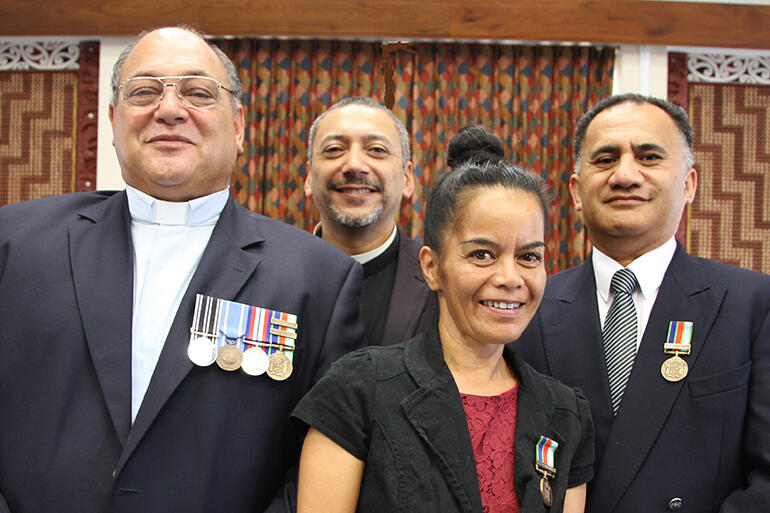 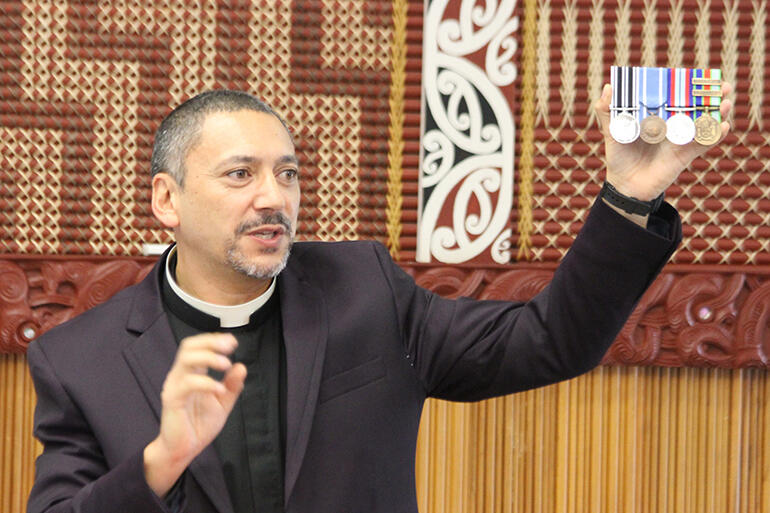 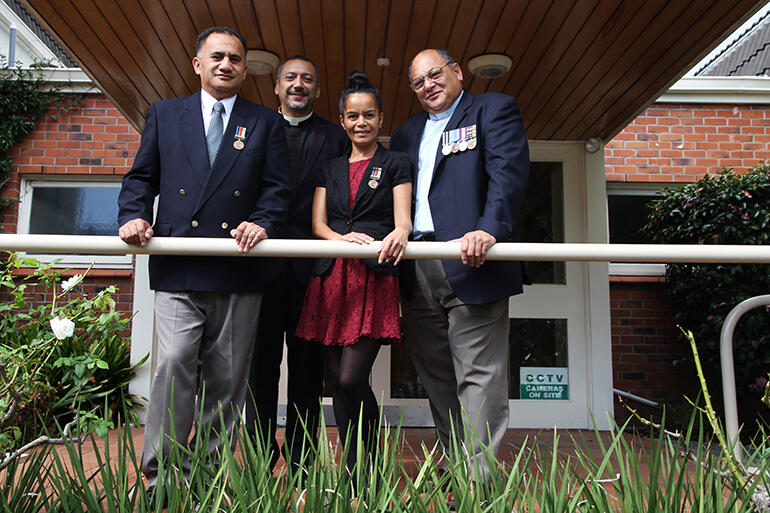 Should the church be actively recruiting for pastors from the armed forces?

Having gone along to last week’s midweek Eucharist at St John’s College, I've been asking myself those questions.

Because no matter where you stand on the Just War-Pacifist spectrum, there’s an argument that says people who’ve served in the armed forces have the potential to make first-rate pastors.

Pastors who’ve not only studied the theory – but who’ve put it into practise in tough situations.

“If you’re out on patrol,” says the Rev Stan Pilbrow (he knows a thing or two about patrolling, which we’ll explain in a moment) “be it in the desert or the jungle, or in the New Zealand forest, you’re constantly walking around with your NCOs checking on your soldiers: ‘Give us a look at your feet’, for example…

“Or if you’ve been out on an exercise in the snow and ice, you’d better make sure that when your guys get back that there’s a hot meal and hot showers ready for them.

“As an officer, and particularly as a young officer, you spend a lot of your time in a pastoral mode.”

Yes, the army trains people in “the art of warfare”.

But teaching that “art” involves teaching leadership, organisation and problem-solving and logistics, too.

And they’re skills that come in quite handy in a church setting.

“When you’ve helped move 100 people to Namibia for peacekeeping duties,” says Stan, “organising a church fete is not such a difficulty.”

Not your normal college service...

Last week’s midweek Eucharist at St John’s departed from the normal script for those services.

The New Zealand Defence Service Medal (NZDSM) is a new military award that’s now being presented to folk who’ve served in the military since the end of the Second World War.

At least 160,000 Kiwi ex-Service men and women are eligible for that medal – and last Wednesday Katene (who is an ex-Air Force chaplain himself) presented Mokaraka Hokianga, Colenso Eramiha and Stan Pilbrow with theirs.

Mokaraka, who has ties to Rongowhakaata, Te Aitanga a Mahaaki, Ngati Kahungunu and Ngai Tamanuhiri, had served for 11 years in the Air Force.

Mokaraka is a Kai Karakia back home in Tai Rawhiti. At college she’s beavering away on her BTheol (she’s already tamed the Anglican Studies Programme) as well as a law degree, and when she’s finished, she intends returning to Tai Rawhiti “to be the best Kai Karakia I can be.”

Colenso Eramiha, who has Nga Puhi ties, served as a Territorial infantryman during the 1980s. These days, he’s the Kaiwhakamana at the John Kinder Theological Library (“it’s one of the most enjoyable periods in my life”) and he’s working towards his Diploma in Information & Library Studies.

Stan Pilbrow, who has ties to Ngati Kahu, and who is already an ordained priest (he serves at Nga Whare Waatea and at St Columba’s Grey Lynn) is rounding off his BTheol studies at St John’s.

Stan has developed a particular interest in counselling, and he hopes to stay on to nail his MA in that discipline, and to apply his skills in that field.

Stan’s got quite a military whakapapa, too.

He was a Lieutenant Colonel in the army, where he’d served for 28 years.

So, as you’d expect, his NZDSM medal sits alongside a couple of others – an NZ Operational Service Medal (you get one of those when you serve somewhere where you could get shot at); a New Zealand Long Service and Good Conduct medal – which is awarded to officers who have completed 15 years of unblemished service (or, as Stan puts it, “15 years of undetected crime”) and a United Nations Truce Supervision Medal.

He was awarded that UNTSO one for having served 18 months in Jerusalem and the Golan Heights and Damascus as a soldier with a UN force in the early 1980s.

After Katene had told the midday congregation what the various medals represented, nothing much more was said.

Nothing whakahihi (boastful), that’s for sure.

As Stan said later – those gongs weren’t awards for bravery. There was nothing to crow about, he was implying.

On the other hand, you’d have to be hard-hearted not to feel the special wairua around the occasion.

You’d have to be forgetful too, of the extraordinary record of service that Maori have in the New Zealand defence forces.

After World War Two, Lt General Bernard Freyberg had this to say about the 28 Maori Battalion: “… no infantry battalion had a more distinguished record, or saw more fighting or, alas, had such heavy casualties as the Maori Battalion” – 649 men were killed, and 70 percent of the 3578 volunteers who served in that battalion were wounded.

You’d have to be forgetful, too of the fact that Maori soldiers are stillthe backbone of the New Zealand army. Nearly half of our present-day soldiers are Maori.

“It is a wonderful privilege,” said the writer, “to be able to mihi to our three wonderful servants – Stan Pilbrow, Colenso Eramiha and Mokaraka Hokianga – on this day of recognition and honour.

“I am glad to join my voice to the chorus of others who this day say thankyou to these servants as they receive a deserved award in recognition of duty served and time sacrificed.”

The writer concluded his letter on a personal note:

“Mokaraka, as a daughter of Tairawhiti, I want you to know that we your people are very proud of you today. Although we could not be there in body, we are there in spirit, and our heart and our prayers are very much with you.

“We look forward to celebrating with you when next you return home.”
(signed)

The Most Reverend William Brown Turei.

There was perhaps one other contributing factor to the specialness of the occasion – the fact the ceremony took place at a Eucharist dedicated to the memory of Dietrich Bonhoeffer, the German pastor who could so easily have escaped the last war, but who chose to go back to Germany to join the sufferings of his people.

And who, having chosen to resist, and having backed a failed plot to assassinate Hitler, was martyred by the SS on April 10, 1945.

Greater love hath no man than this, that a man lay down his life for his friends. John 15:13