Rest in peace, and rise in glory

At the end of a six-day long tangi, Archbishop Brown Turei is laid to rest in an urupa overlooking Whangaparaoa Bay. 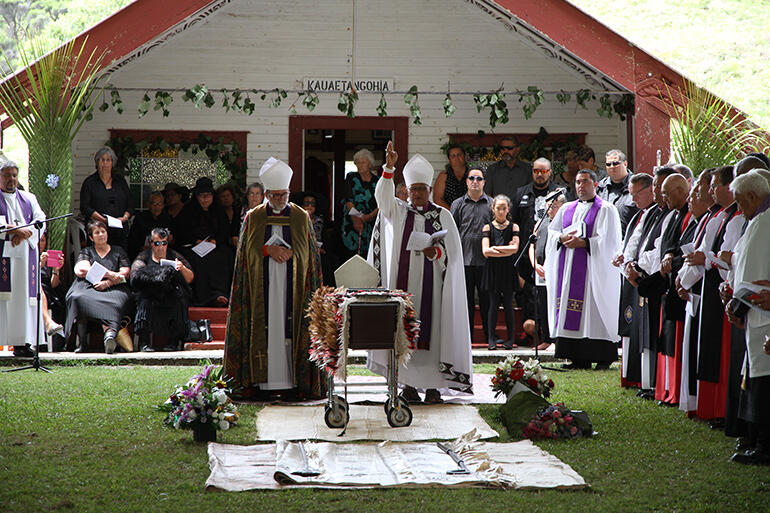 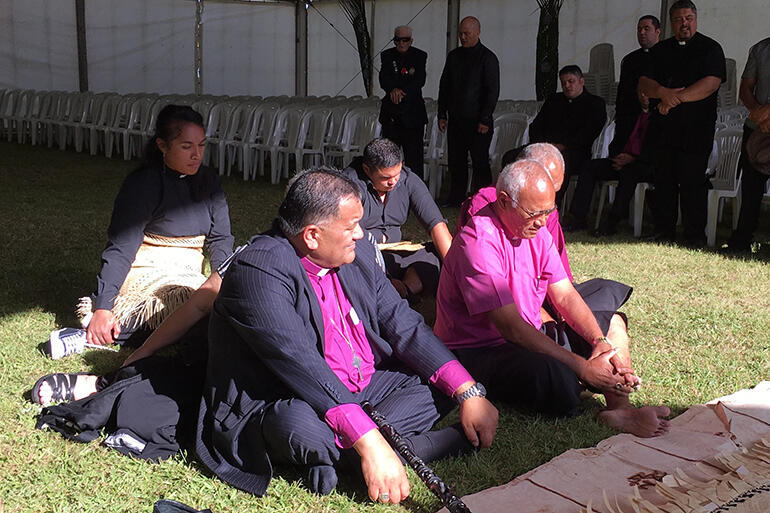 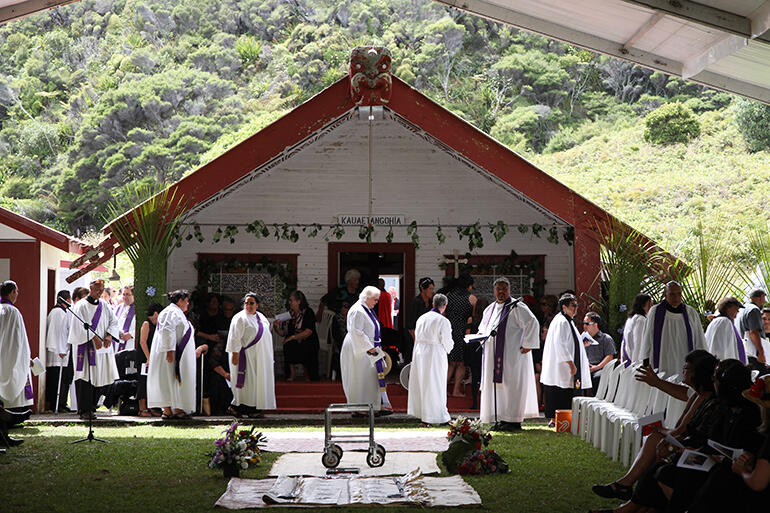 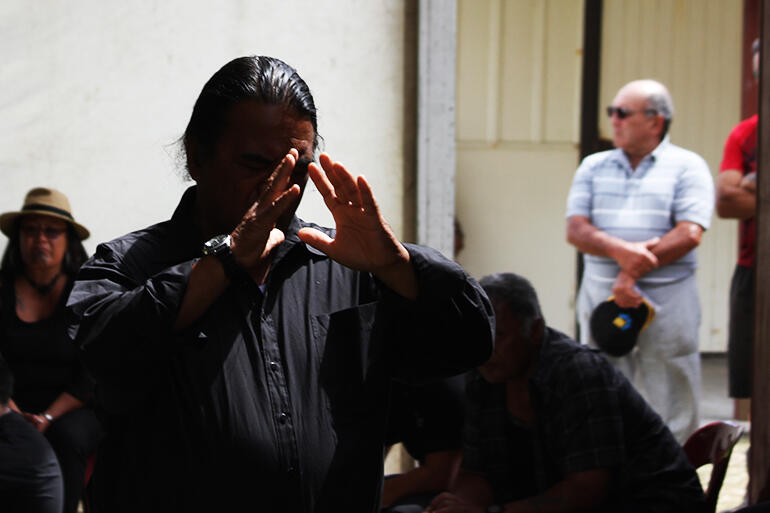 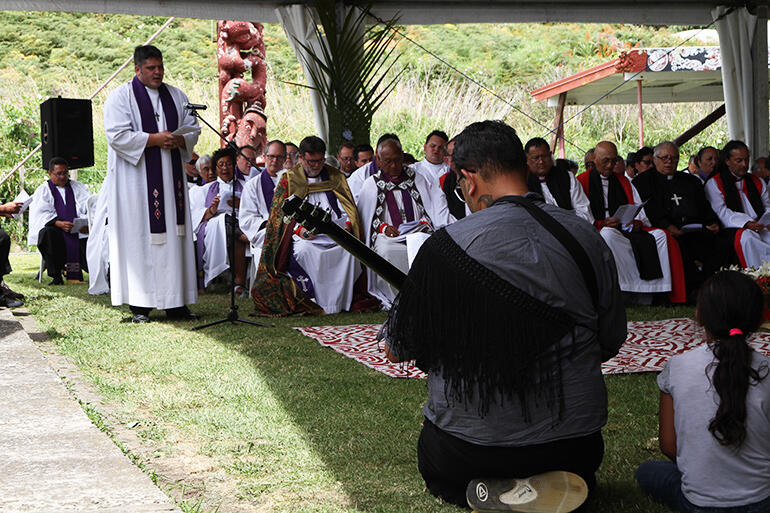 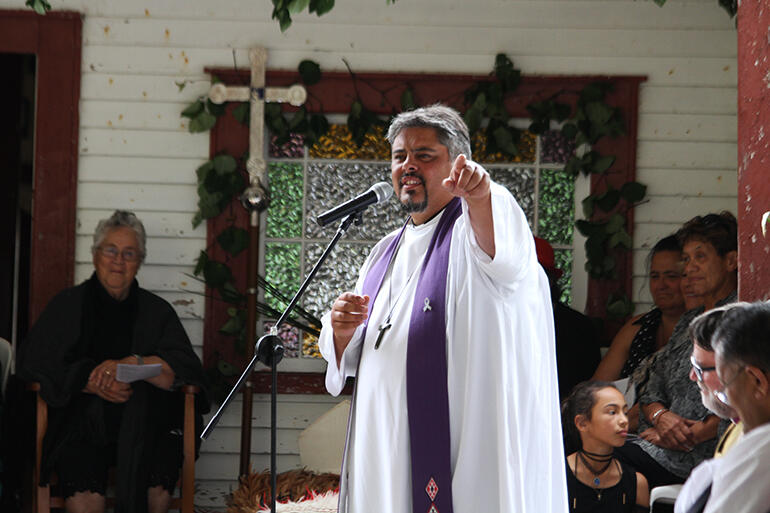 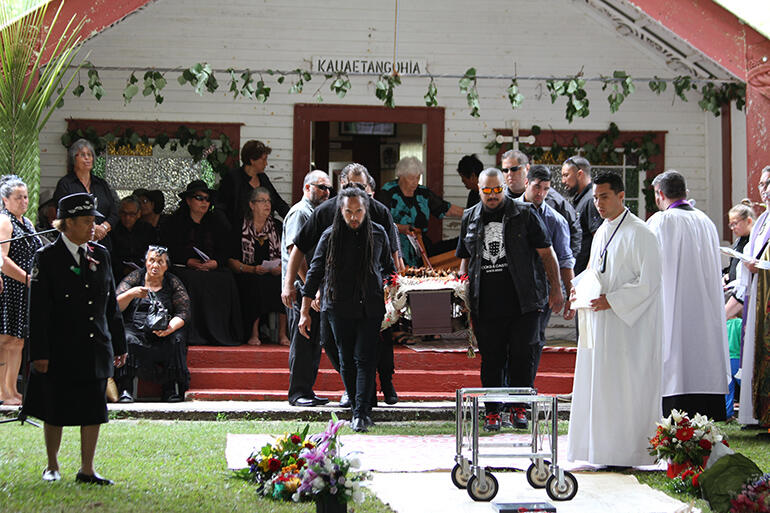 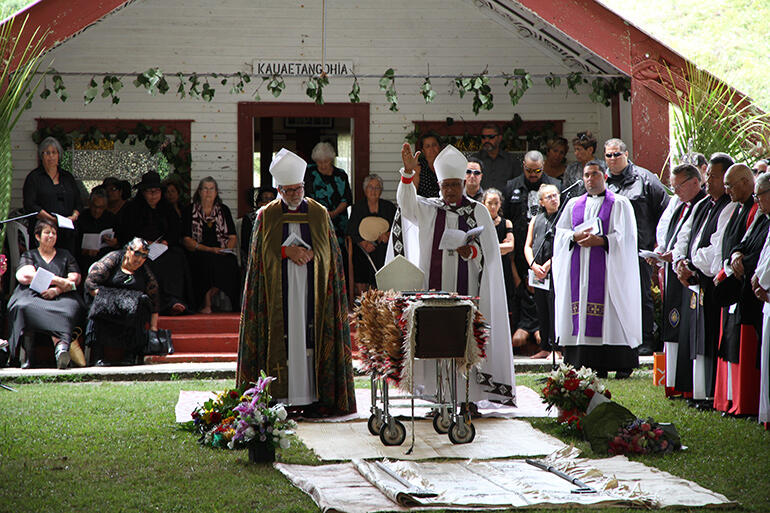 Some 700 mourners poured on to KauaetangohiaMarae at Whangaparaoa yesterday for the funeral of Archbishop Brown Turei.

The funeral marked the end of a six-day tangi which had begun in Gisborne, where Archbishop Brown died last Monday, moved on to Whangara on Wednesday and, with more stops along the way, reached its final destination at Kauaetangohiaon Thursday.

Yesterday’s events began with a prayer service as dawn began to light the eastern horizon – which tradition dictates is the time when the lid of the casket is closed for the final time.

Groups of mourners continued to be welcomed until shortly before the funeral proper began – including the small opefrom the Diocese of Polynesia, which came on about 8:30am, and which included Archbishop Winston Halapua and his wife Sue, who had flown from Fiji to pay their respects.

The service began at 11am with a welcome from Te Whanau Apanui, the host people at Kauaetangohia,which two of their leaders concluded with a Ringatu blessing.

With upraised hands they prayed, quoting psalms and prophets and asking God’s keeping of the Turei whanau, before the full Anglican service began. Archbishop Brown had ministered as the Bishop of Aotearoa, after all, and not just as the Bishop of Anglicans.

Archbishop Brown’s son William and grandson Dwayne then gave brief tributes. William spoke of his father’s passion for sport and for golf in particular: at the age of 75, his dad was still driving the ball the length of the fairway, and still setting course records. While Dwayne, wearing his koro’s military medals on his chest, spoke of his love for his grandfather: “for us, growing up, he was Superman”. He paid tribute too, to his Nanny. Without her, he said, his grandfather would have been lost.

The Gospel reading for the funeral was Matthew 3: 13-17 – which is the story of the baptism of Jesus, and which speaks of the heavens opening, the Spirit of God descending, and a voice being heard from Heaven.

Bishop-elect Don Tamihere preached the kauwhau. He gave a brief, light-hearted account of Archbishop Brown’s early life – and at each turning point in his story he repeated the refrain from the Gospel reading: “The heavens opened, the Spirit of God descended, and a voice was heard from Heaven.”

Don also said that it was inevitable that Archbishop Brown’s tangi would be held at Kauaetangohia,because that’s where he’d spent his early childhood, and no matter how high he rose through the ranks, he’d retained a childlike trust.

And the bishop-elect urged his hearers to do likewise: “to become as little children”, he said, and to place their trust in a loving, forgiving God.

After the commendation, the pallbearers carried the coffin down the length of the marquee, where they paused while a haka thundered around them – before loading the casket into a waiting all-terrain army vehicle.

That Pinzgauer bore him up a grassy knoll to St John’s Whangaparaoa, the little white Anglican church which stands across the fence from the marae where, for one last time, Archbishop Brown filled a church with a people giving thanks to God.

Then, with a fire engine with lights flashing leading the way, the Pinzgauer made its way west down Highway 35 to Aorangiurupa, which sits on a headland overlooking Whangaparaoa Bay, where the Tainui waka made landfall in Aotearoa.

The Last Post was played – the departed was a 28 Maori battalion veteran – the prayers of committal were spoken, and Archbishop Brown Turei was lowered into his grave, as a warm breeze blew in from the sea, and waves ceaselessly tumbled onto the beach below.

The tangihana, explained Bishop-elect Don, is liturgy: every part has a purpose, every part is designed to keep people moving forward to a desired end. In the case of the tangi that purpose, in part, is to help the whanau as they take their loved one to their resting place.

When tangihanga is done properly, says Don, grief’s heaviness lifts, and the wider family can leave the graveside in peace.

Time now, then, for all archbishop’s many mourners to return from life under te kapua pouri – the cloud of sadness – to te ao marama,the world of light.