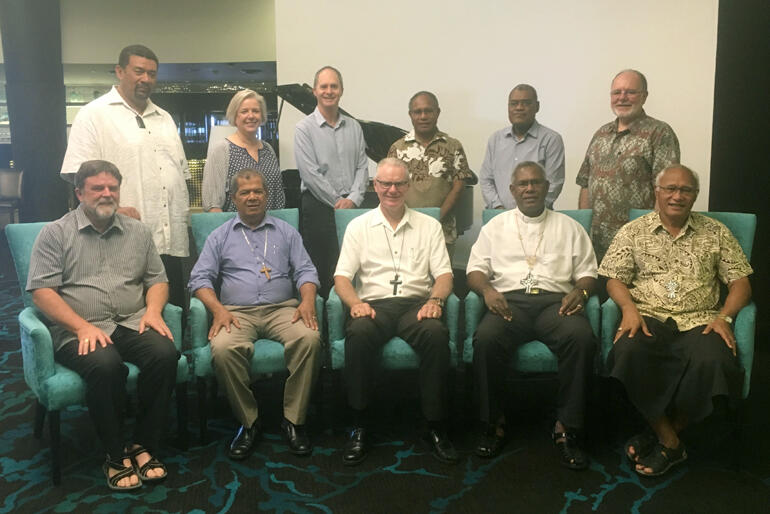 The Anglican Primates of Oceania, who have been meeting in Australia, have warned of the threat to their region from climate change. In a joint statement, the five Primates said :

“We agreed that as whole nations of ocean people lose their island homes, climate justice advocacy and action must become the most urgent priority for Oceanic Anglicans.”

Archbishop Philip Freier, of Australia, Archbishop Clyde Igara, of Papua New Guinea, Archbishop Winston Halapua, and Archbishop Philip Richardson of Aotearoa, New Zealand and Polynesia, and Archbishop George Takeli of Melanesia met in Tweed Heads, in New South Wales. They noted that they were four Provinces covering many nations, more than 1000 languages, with rich and diverse cultures. They said they were united through the interweaving of history and long friendships, but were coming together against a backdrop of disharmony:

“We gather at a time when the rhetoric of nationalism, ridicule, fear-mongering, and hatred is so prevalent. In such a climate where “me first” or “we first” dominates, we affirm: “we together.”

They said they had heard “harrowing” stories of human rights violations in West Papua: “which were poignantly focussed for us by Archbishop Clyde Igara, who said: “I am West Papua. I am Papuan” – such is the arbitrariness of national boundaries and the historical circumstances that have defined them.”

The primates said they would be judged by their failure to support their weakest part: “We celebrate that what the world views as weak is in fact strength, what the world views as folly, is indeed wisdom. We rejoice at the fruits of the Spirit we see in each other, and we give thanks for the faithfulness of our forebears who sowed the seeds of the Gospel in our lands.”

They also addressed the challenges of seasonal workers and labour mobility across their Provinces and “how we could respond both pastorally and politically;” they also considered the way “our growing relationships with the Anglican Provinces across Asia could be deepened and looked forward to the meeting of the Primates of the Anglican Communion in October 2017.”