'Once in a lifetime' powhiri

On the eve of the ACC, Auckland Anglicans are told to get ready for a "once in a lifetime" event. But Kiwis aren't the only ones to experience such a high.

• How the Episcopal Church saw it 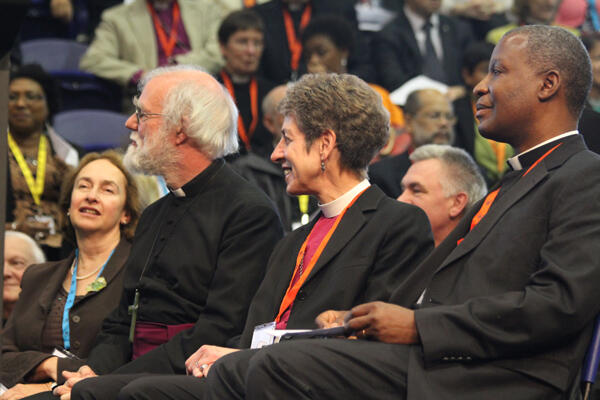 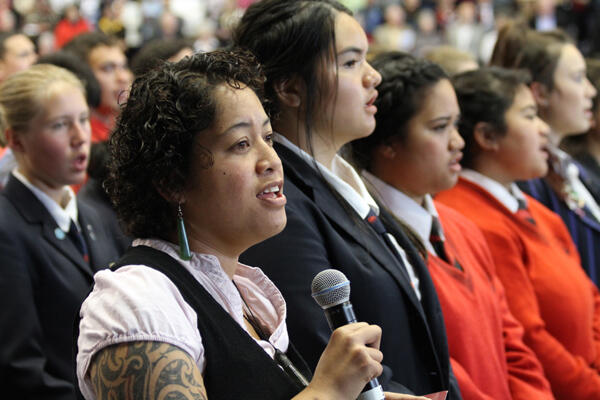 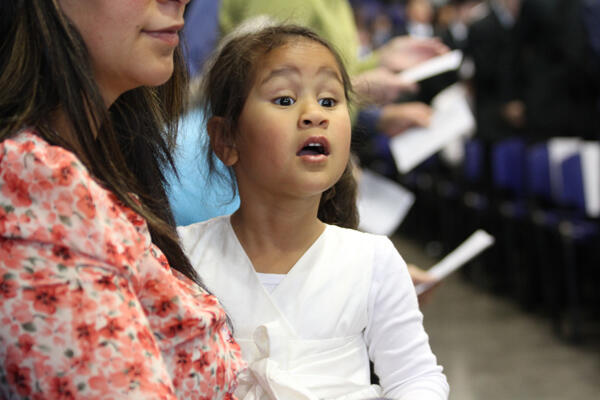 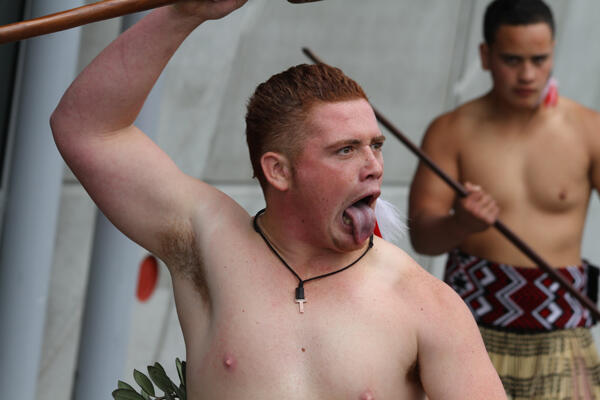 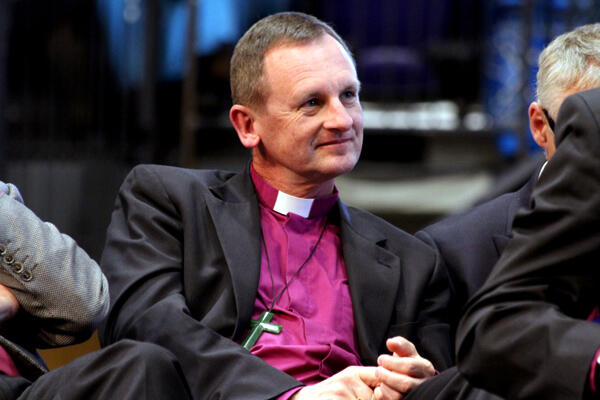 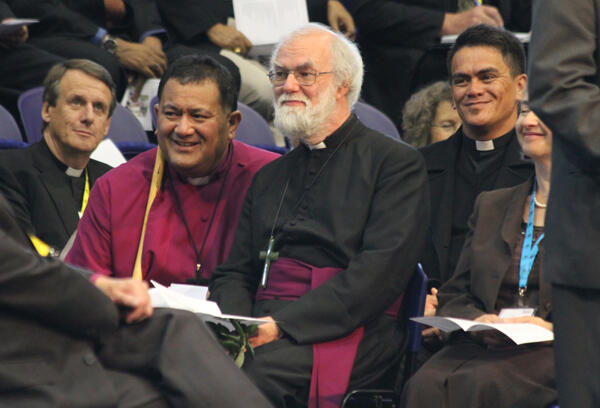 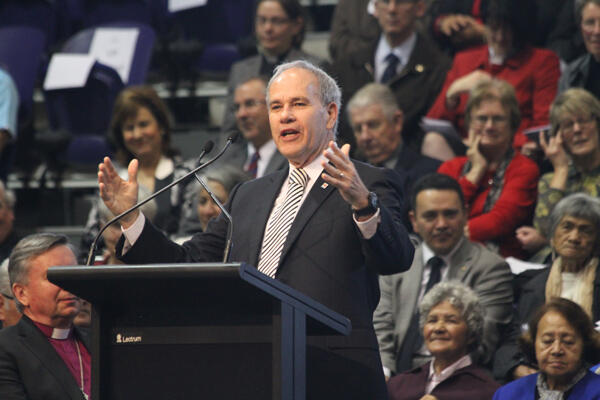 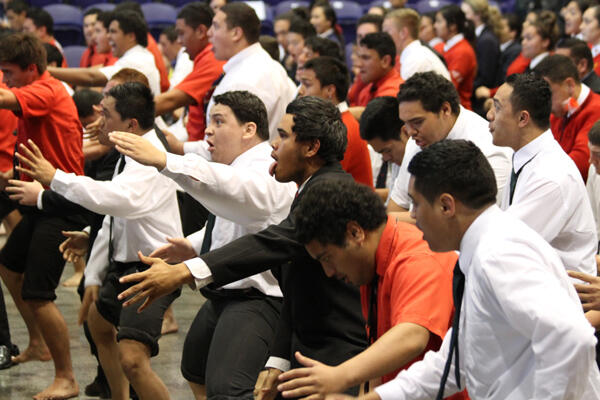 Get ready for a once-in-a-lifetime event.

That’s what Auckland Anglicans heard in the leadup to the Archbishop of Canterbury’s visit and the Anglican Consultative Council meeting in Holy Trinity Cathedral, Parnell.

This, they were told, was the first and last chance for Kiwis to see and hear Dr Rowan Williams, and the only chance most would ever get to sample the ACC.

Well, on the strength of today’s powhiri and grand opening for the ACC at the Telstra Events Centre in Manukau City, on the southern fringe of Auckland – Kiwis weren’t the only ones experiencing a “once in a lifetime" event.

Because from the moment the three young Maori warriors sprang from inside the stadium – prancing, flashing their pukana (wild-eyed grimaces) swinging their taiaha (long wooden clubs) – to challenge the newly arrived Archbishop of Canterbury…

This didn't feel like your average church conference trundling into life.

Dollars to doughnuts, most of the ACC delegates and staff would never have experienced something like thatwelcome in the flesh before.

All around, you could see (as Archbishop Winston Halapua put it) “all the colours of the Day of Pentecost” – the ACC members themselves, and rank upon rank of new New Zealanders, with so many brown faces among them.

If the Anglican Church was ever going to get a big vision of plurality, then it had to happen here, in the largest Polynesian city on earth.

The Archbishop of Canterbury, who is president of the ACC, reflected on that diversity in his response to the speeches of welcome.

He listed the gifts this province has given to the Communion. And he mused on the “brave, creative experiment in living together in difference” that is the three-tikanga church of Aotearoa, New Zealand and Polynesia, and the “whole experiment of New Zealand itself – which is the experiment of living in a world of more than one culture.”

And in the wake of the 400th anniversary of the King James Bible, he considered again the perceptions of Bishop Lancelot Andrewes, who was one of the leading translators of that Bible.

Bishop Andrewes had drawn attention to the “cloven” tongues of fire which appeared over the disciples’ heads on the first day of Pentecost.

“Now, asked Bishop Andrewes: why are the tongues of fire divided?

“Because no one human tongue alone can fully tell the works of God.

“The divided tongues of fire at Pentecost tell us that where the Holy Spirit is, there is conversation.

“There is a mixing of what different tongues can tell.

“Because no one language alone, no one culture alone, can carry the full weight of what it is that God wants to share with us, God’s children.

“Bishop Andrewes pointed out that it’s not an accident that the Bible itself has two original languages, not one: Hebrew and Greek.

Archbishop Williams is Welsh, and he spoke of “the enormous privilege of coming from a bicultural environment. Growing up in a family where two languages were always heard around the table..."

Growing up in such a home was to see that humanity “is never going to be something that tries to speak only one language, to act one way, to deal with people who are like oneself.

“That we shall learn to listen to one another’s languages, experience and insight with all the enthusiasm and eagerness with which we would listen to God’s own word, and pray that we shall have a fiery, kindling experience as we meet together – and find our own language renewed in listening to others.

“And be signs of hope for a world in which by God’s purpose, and God’s promise, one of these days… all of the islands will rise and sing.

Thanks to the young...

The other thing that must be said about this opening event is that it belonged to the young.

That came via a youth forum, where for 40 minutes school students posed searching questions to the Archbishop of Canterbury; the Presiding Bishop of the US Episcopal Church, Katherine Jefferts Schori; and the Archbishop of Southern Africa, Thabo Makgoba.

The young people had been working on their questions for weeks. And what made the session particularly interesting is that the three bishops didn’t get the questions in advance.

So: no patsy answers there.

The questions varied from the downright quirky: “What shoes would God wear?” to the no-escape serious: “New Zealand is debating a bill to authorise same sex marriage. What do Anglicans have to say about same sex marriage?”

On the shoes question, Bishop Jefferts Schori figured the Almighty would opt for either dancing shoes or bare feet: “I think the divine toes would want to enjoy the earth the Holy One has created.”

On same-sex marriage, Dr Williams said, to laughter: “Thanks a bundle.

“The short answer is that the Anglican Church has quite a lot to say about this issue – but it's not always the same thing that people are saying.

“I’d say that for the vast majority of Anglicans in the world, the idea of same-sex marriage is not something they can come to terms with.”

Bishop Jefferts Schori, on the other hand, said people who experience same-sex attraction “should have the same ability to live in a covenanted relationship with another person” as the rest of us have.

There were other interesting questions, too: such as: Why did you want to be a bishop?

Answer, from Archbishop Makgoba: “I didn’t want to. But I think a bishop is called to be the servant of the servants. So we are all motivated by serving God in others.”

And at the end, there was a post Christchurch-earthquake question for Archbishop Rowan.

In the light of that disaster, asked one young woman, how can you explain God?

Archbishop Rowan’s answer: “Faced with all kinds of horrors, people have gone on believing in God. That’s a fact.

“There’s another simple fact: The world moves on its own by natural processes. God hasn’t made a world where it’s always going to be safe, or where he is able to step in and adjust the settings.

“So these are the two ends of the problem.

“And I try to keep looking into the darkness in the middle.”

The formalities over, it was on to a super lunch in the centre’s dining area, hosted by Auckland’s mayor, Len Brown.

A ‘super’ lunch? Well, super because of the mayor’s generosity.

There was no doubt about the quality of the three-course meal the ACC delegates were served, either.

But super, too, because Len Brown had earlier explained that, thanks to the amalgamation of Auckland’s various local bodies, Auckland was now a ‘Super City’ – and that he therefore, by logic, with his tongue planted firmly in his cheek, must be its ‘super mayor.’

During the powhiri Len Brown had also proven an usually perceptive host.

He’d greeted Archbishop Rowan and Dr Jane Williams at the airport, and spoken of their obvious grace and humility. No phalanx of guards and security, no popemobile...

He’d paid tribute, too, to Anglican contributions to the building of the nation of New Zealand, and of Auckland itself.

He cited, for example, the work of Henry and William Williams in the 1840s, translating the Bible into Maori, and also the role of Anglican missionaries in forging the nation’s founding document, the Treaty of Waitangi.

His survey of Anglican contributions touched, too, on those whose modern-day ministry “is at the hard end of need”.

Folk such as Fr Mark Beale and his parish of St Elizabeth’s Clendon, little more than a couple of kilometres from the Telstra Centre, who for years have reached out to prison inmates and helped their transition back into society.

Len Brown also showed himself to be a super-talented singer, first by leading the singing of Whakaria Mai – the Maori version of How Great Thou Art – during the powhiri, and at the close of lunch by singing, unaccompanied, a song which he felt might have relevance to the ACC meeting:

So let me fly please lead me and I'll follow you...
In that bright land where grows the olive tree

And that, in turn, prompted an an equally fine singer – Archbishop Rowan Willams – to offer, unaccompanied and in Welsh, a hymn of praise to God.

If nothing else, the ACC is off to a good start.