Tuesday, New Plymouth - and General Synod has spent much of its morning in tikanga caucus, navigating its way through questions about Motion 29.
• NZ Anglicans to consider a new plan to allow same-sex blessings in churches 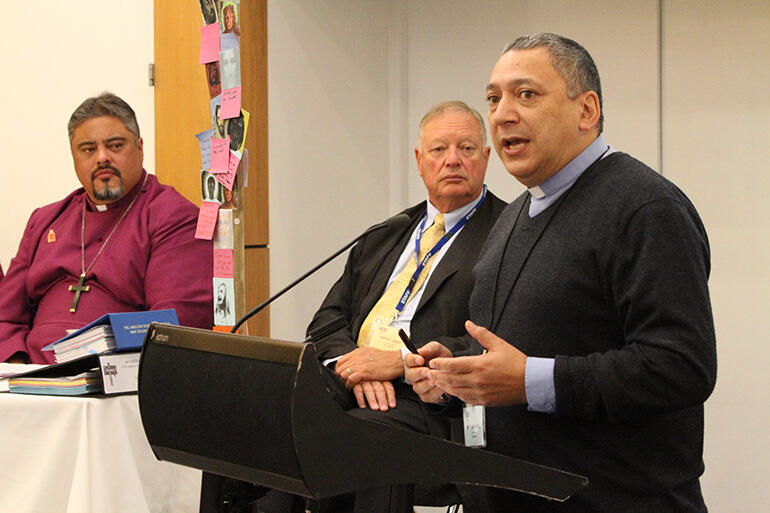 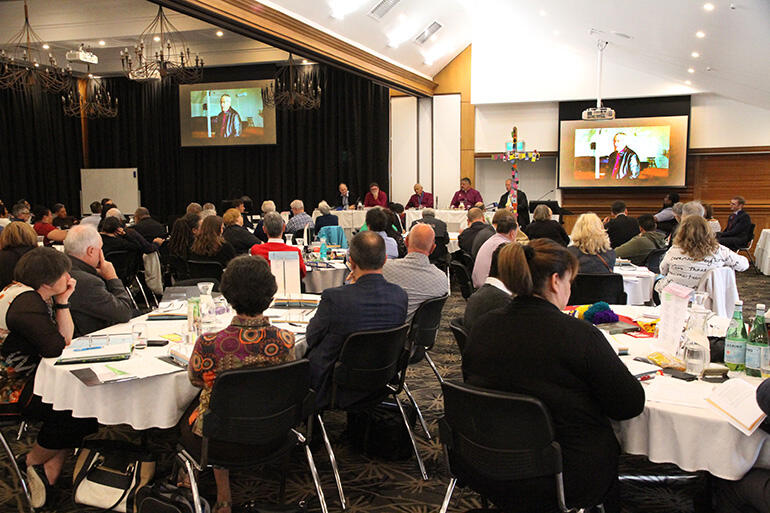 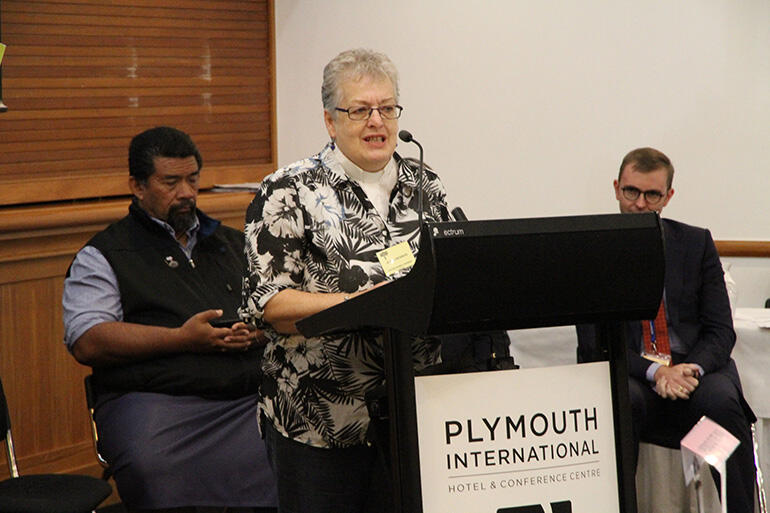 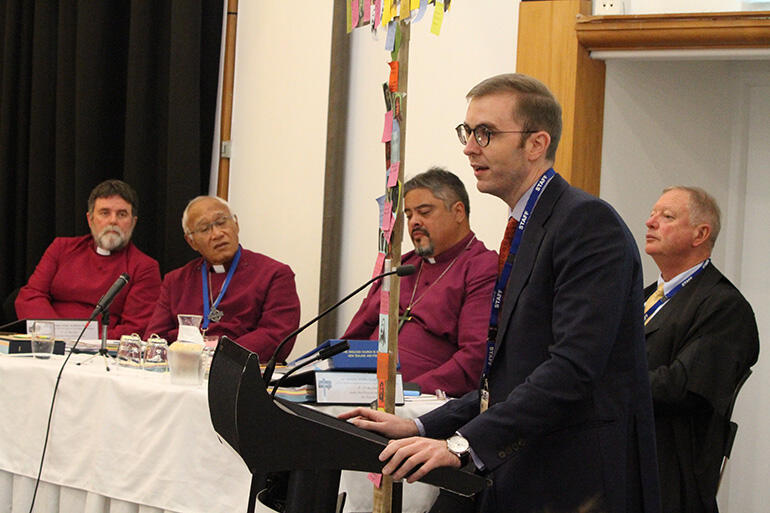 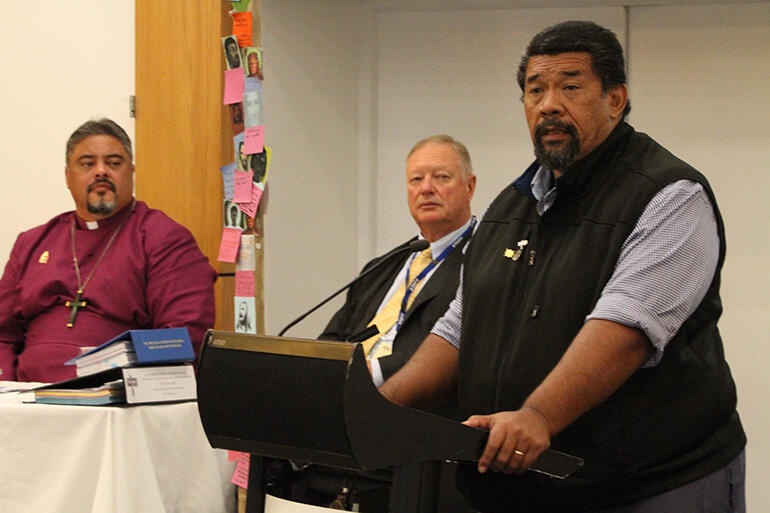 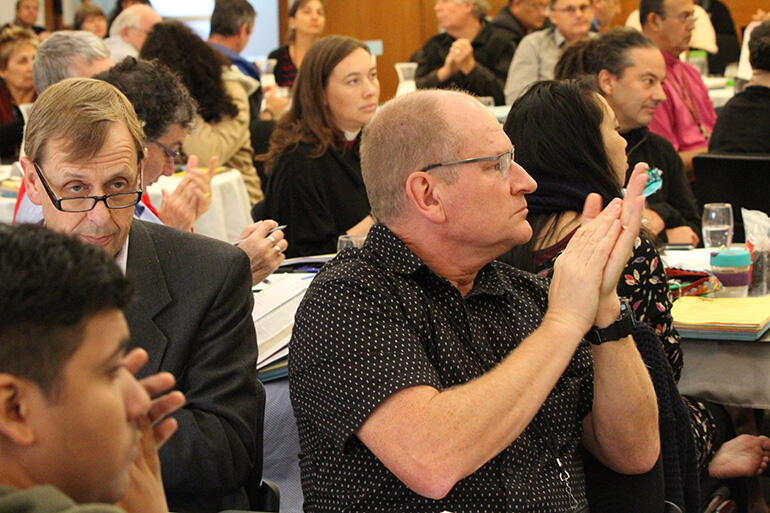 The General Synod's plans to complete its deliberations on the principles of Motion 29 by lunchtime today have had to be parked.

The Synod had set aside all morning to background the work of the Motion 29 Small Working Group – and to hear from the group itself about its thinking on its work.

No sooner had the Motion 29 group completed its brief introduction, than Archbishop Don Tamihere called for a Tikanga caucus – and those caucuses have continued until the scheduled 12:30pm lunch break.

At the beginning of the day, Archbishop Philip Richardson gave a brief sketch of the arc of the church's wrestling over matters of same-sex relationships – which had begun in the 1970s when Bishop David Coles, who was then Dean of Waiapu, chaired the first group called to report on these issues.

Since then, there have been a series of conferences to consider theological and biblical interpretations on the issue (known as hermeneutical hui), the Ma Whea commission (chaired by Sir Anand Satyanand), a Doctrinal Commission (which reported two irreconcilable positions) and, most recently, the Way Forward commission.

Then, arising out of the General Synod in Napier in 2016, when Tikanga Pakeha was at the point of splitting, there came a different proposal: for  the archbishops to appoint small group of experts who would work to a much more tightly defined task.

In essence, their task was not to grapple with the theology – but to find "structural arrangements", that would allow a way for people of vastly different convictions to stay together in the same church.

And that's the background to the Motion 29 Working Group's final report[1] – and to Motion 7 before this synod, which proposes receiving that report, accepting its recommendations, and endorsing, in principle, the proposed constitutional changes that would be necessary to give effect to their recommendations.

The chair of the Motion 29 SWG, the Rev Katene Eruera, stepped to the microphone after Archbishop Philip's introduction, and said his group wanted to keep things short.

He sensed that the synod wanted "to crack on with things" and his group would confine itself to short opening statements from its members, who would answer any questions about their work, if these arose.

Bishop Richard Ellena, the Bishop of Nelson, was the first to speak – and his contribution was a poignant one, delivered by video – because he is standing by for major surgery.

He said that being part of the Motion 29 group "was one of the most respectful experiences I've had in my years in the church."

He said he was proud to be the bishop of an evangelically orthodox diocese, which is committed to the authority of Scripture. And he alluded to the events of the 2016 General Synod, when Nelson was ready to walk.

"We couldn't, in all good conscience, accede to that which was being proposed by that General Synod."

At the same time, he said, he had agonised over breaking apart the church which Christ gave his life for."

The Motion 29 recommendations, he implied, offered a way through for many of the Anglicans he represented.

He then commended the M29 report and recommendations to the Synod.

Katene then gave his remarks.

He noted that the challenges the entire Anglican Communion faced over human sexuality were "fraught with difficulties."

The Motion 29 group, he said, "was seeking a way which offers you, I hope, no matter what your theological conviction, your mana and dignity, a way in which you can exercise with integrity your walk with God."

He paid tribute to the earlier commissions, hui and working groups which had grappled with these issues.

In presenting the Motion 29 report and recommendations, he said, "our hope is that this is the close of the chapter required of General Synod/Te Hinota Whanui."

"Our hope, in presenting our report, is that we can make a transition, allow ourselves to make a shift to some form of resolution, where we can all feel the grace of God."

[1] In essence, that proposes no tinkering with church law about the definition of marriage, devolving decisions about whether to bless same-gender couples to diocesan/hui amorangi level – and making changes to church law which mean that bishops and priests who do – or don't – decide to bless can't be hauled before church courts for their convictions.