The General Synod spent all of Tuesday on Motion 29 - the motion on blessing same gender relationships. And after a slow start, we had a big finish. 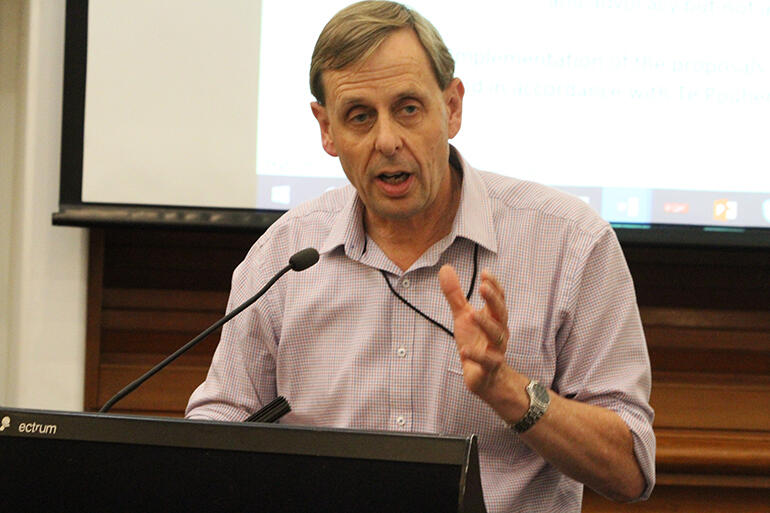 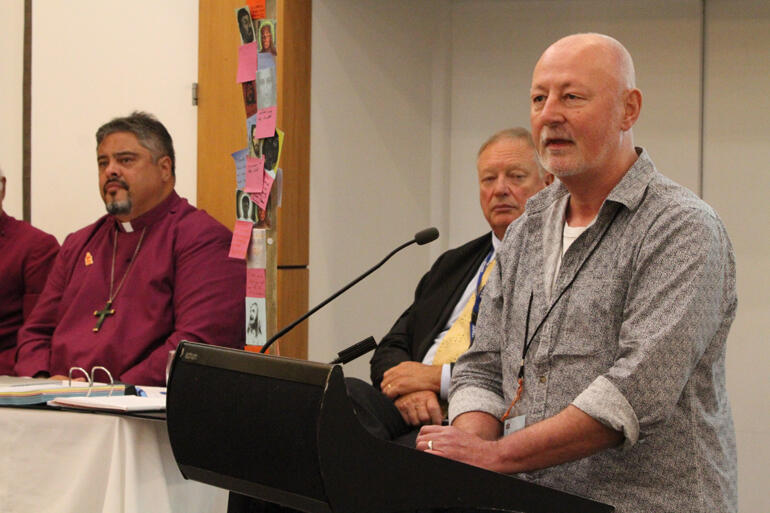 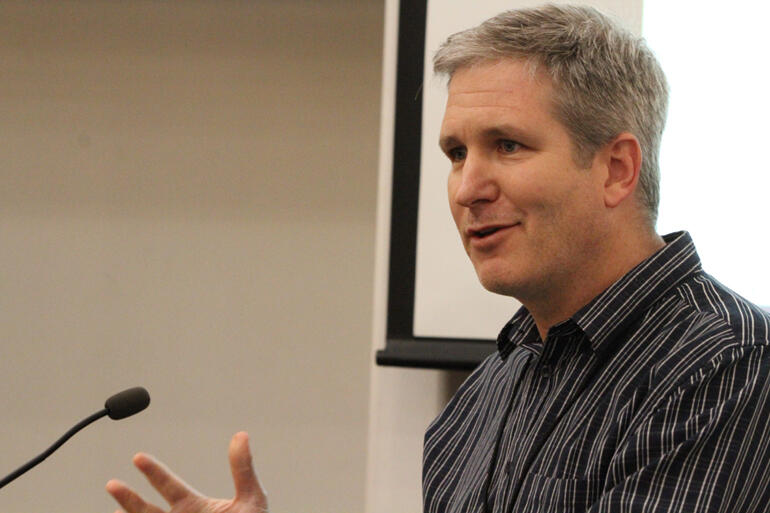 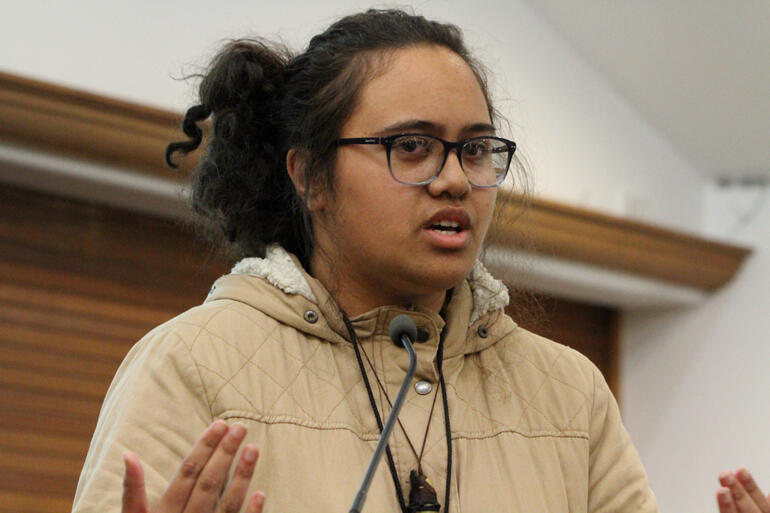 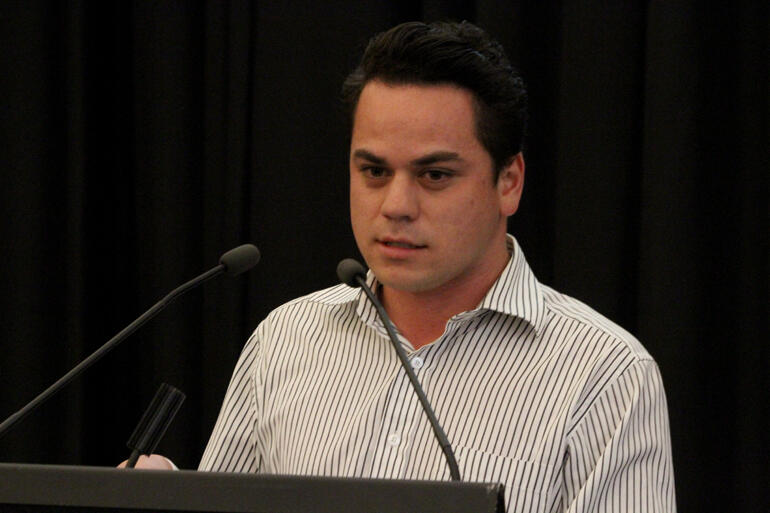 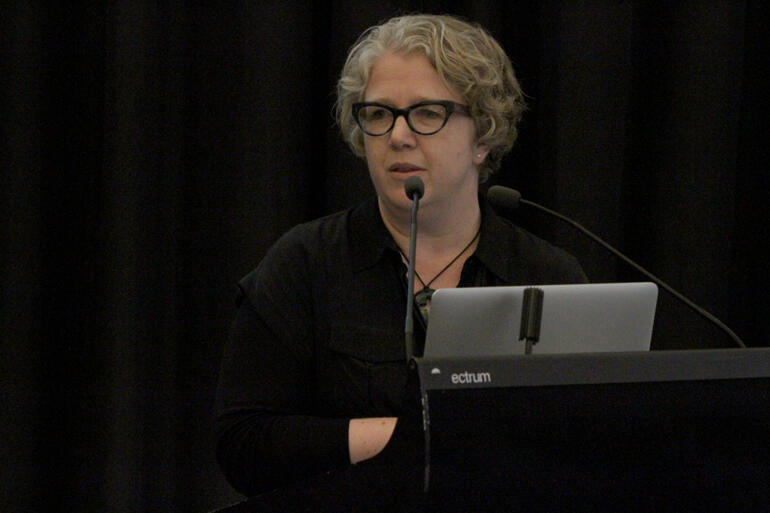 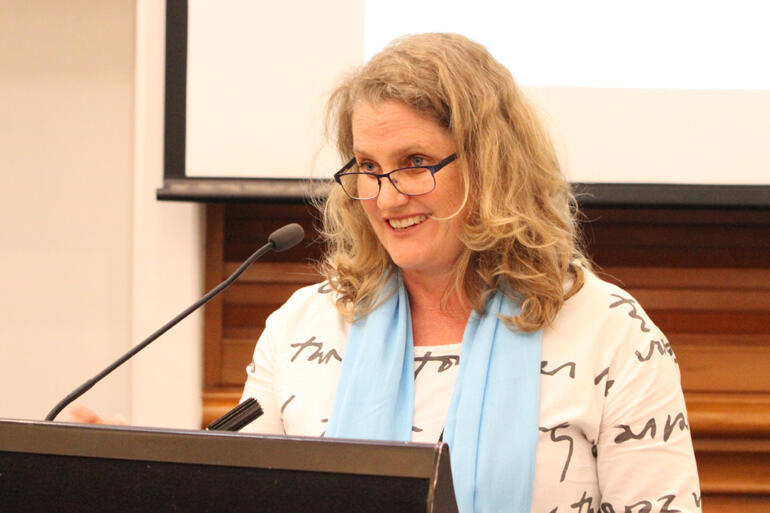 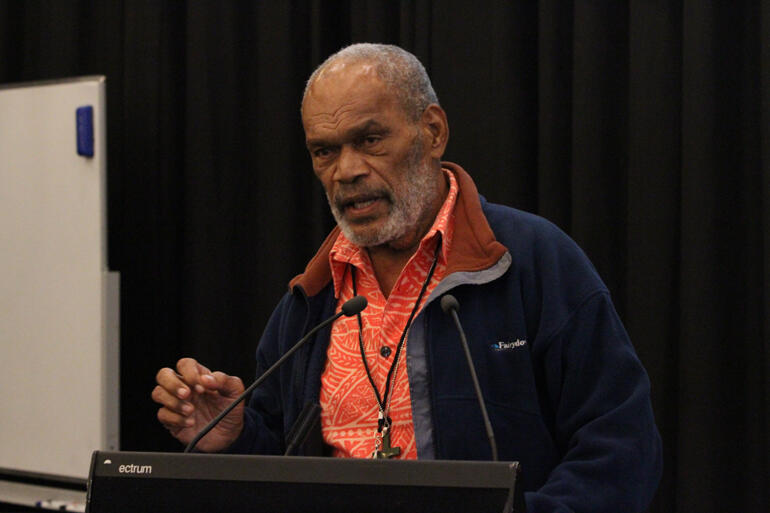 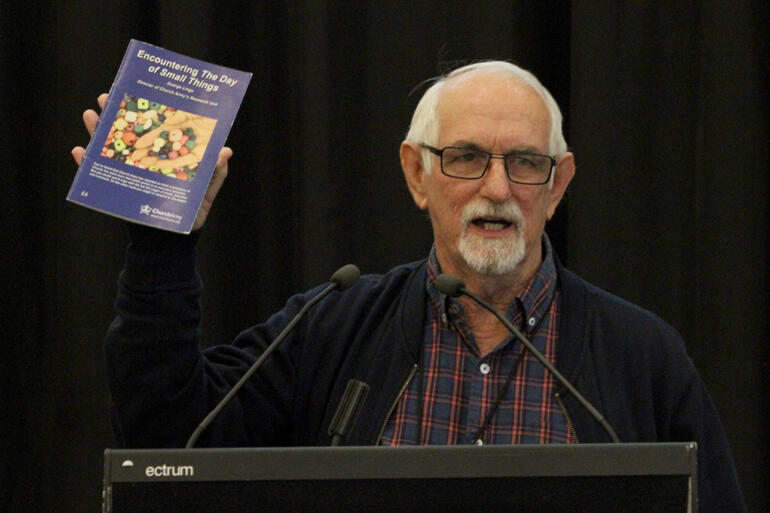 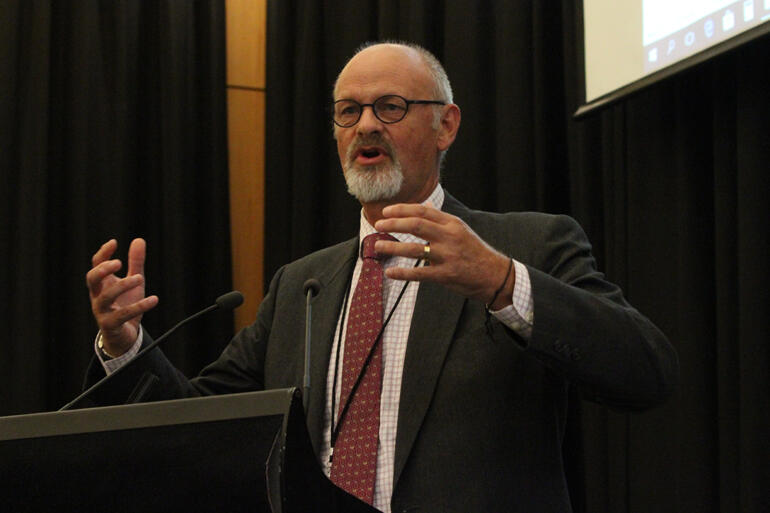 The big debate about the principles of Motion 29 – according to the best-laid plans of those who organise General Synod – was to begin first thing on Tuesday, and to be done and dusted by lunchtime.

And it didn't get started on the principles, the big picture stuff, till about 90 minutes before the scheduled 6pm end of the day.

There'd been the scene-setting, the throat-clearing – a brief overview of the history of the church's grapplings with same gender relationships, and an equally brief explanation by the Motion 29 group of what it offered.

But much of the day after that was spent either in waiting – the synod spent hours in tikanga caucus – or on the minutiae of discussing possible amendments to the motion: should the threshold for a church blessing be set at a civil marriage or civil union, for example.

For some in the synod, those long delays were frustrating.

The amendments to Motion 7 were settled (you can read the amended motion here), the switching between synod in conference mode and synod in session ended, a last-minute motion recognising Tikanga Pasifika's perspective on these issues had been passed, the tikanga caucuses were over – for the day, at least – and the weary synod members got down to tin tacks.

Brace yourself for explosions, many would have thought.

Except the explosions, the anger, the evidence of pent-up frustrations, never happened.

What we experienced, as Archbishop Philip observed from the top table, were 90-odd "grace-filled moments".

Those who spoke did so with passion, with evident conviction – but also with thoughtfulness, and with gentleness and respect (for the most part) for those on the other end of the arguments.

At about 5:45pm, Archbishop Philip drew a line under the debate, and adjourned for the evening.

As promised, no decisions were taken on Tuesday.

Those decisions are Wednesday morning's work.

But here below we offer you, the reader, a taste of those late-in-the-day speeches.

Dr Peter Carrell, who is the Archdeacon for Pegasus in Christchurch, and Christchurch's Director of Education and Director of Theology House, was one of the first to his feet.

He suggested that, despite the Motion 29 group's insistence that it was "never set a theological task… I have a conviction that there is profound theology here in what we are doing."

On the one side, said Peter, using the language of St John, "we have a starting point along the lines of: 'Where love is, there is God.'

"And where such love is - it may be blessed.'

"But on the other side, also in Johannine language: 'If you love me, you will keep my commandments.'

"That understanding of the importance of commandments for our lives as disciples which underline God's call to us to 'Be holy, for I am holy.'

Crudely put, therefore, the debate was between: 'Love versus holiness'.

"And our struggle has been, that we cannot find a unifying theology of what could be called: 'Holy love.'

"We haven't found it in this province... and I don't think we have found it anywhere in the Communion."

Peter also predicted that, in time, a further 'novelty' will be required within Tikanga Pakeha, "one which offers precisely the safeguards such as Tikanga Pacifica has sought and obtained."

The Very Rev Ian Render, who is the Dean of Waiapu Cathedral, then spoke briefly:

"I have been ordained in this church for 31 years… and I'm not quite sure how I managed to stay in licensed ministry for 31 years as a gay, married man.

"I'm standing to remind you of all the people we have lost along the way. The people who were candidates for ordination – but who were turned down because of their relationships, or their declared sexuality.

"I would like, in this late stage of my stipended ministry life, to feel as though I – and everyone else like me – finally will have a place to stand in this church.

"Thank you for the graciousness that I have experienced in these past couple of days...

"Please give me, and others like me, a place to stand."

The Rev Claire Barrie, of St Lukes, Mt Albert, said there'd been "a lot of talk, since 2014, about being a church of two integrities.

"But actually, as we sit here today, the talk of two integrities is still only talk.

"Our church currently has only one integrity: the status quo – and the place in which we stand now, is exclusive.

"As a church, in our canons and statutes and our sacramental life, our voice in the public square… in all those things, we still have no safe place for LGBT Anglicans, no place for their families, their friends, their ministries...

"The whole playing field, is the one single integrity – and that tells a number of our people that they don't yet belong.

"That they are somehow wrong in the eyes of God. And there's an assumption that the status quo is somehow neutral, or safe.

"And it is not. We know from research that young LGBT Anglicans are far more likely to suffer depression, anxiety and suicidal thoughts.

"That's the fruit of the position that we hold now as a church.

"That's the fruit of our gospel.

"And I'm so ashamed of that position."

Jay Behan, who is the Vicar of St Stephen's Shirley, and one of the leading lights in the conservative evangelical movement, spoke against the motion, and sought to explain "why I can't live with it."

"There have been times," he said, "as lonely clergy person in Christchurch, when you don't feel like you're heard. But the working group were fantastic in every interaction which I had with them, and in every other interaction I heard about."

"This issue has never been," he said, "for conservatives, about bigotry, or about exclusion, or about hatred.

"It's a difference of opinion over how you love," he said.

"Because this issue, for some of us, goes to the heart of salvation. I know other people read the Scriptures differently.

"But for those of us who still think 1 Corinthians 6 says that some of this behaviour can see someone excluded from the Kingdom of God.

"If you believe that, and you love people, you can't bless them. You have to warn them. Because you want the best for them.

"But on this particular issue, we have to be able to come before the Lord in good conscience.

"And I would ask that you respect the conscience of those who say: 'We cannot go further with you'.

"But we cannot move further."

Renee Santich, who is also a Diocese of Christchurch representative, and also a conservative, spoke of her "great compassion" for the people who find themselves at the epicentre of the debate.

But she said she was "compelled" to plead that this is "not about sexuality, but about doctrine – about what the church teaches about sin, repentance and salvation."

She forecast that people would leave the Anglican Church once this motion had passed – "not in a flood, but in a steady trickle."

There were several others who offered contributions to the korero, including Archdeacon Wendy Scott, Rev Al Drye, former Church Army Director Captain Peter Lloyd, Rev Dr Tim Meadowcroft, and Bishop Api Qiliho, who spoke of his love for his gay son, and of his longing for a church that would embrace him.

The synod also heard moving speeches too, from younger synod members – from Cruz Karauti-Fox, from Manawa o te Wheke, and from Ataahua Hepi who represents Te Waipounamu, and who said "something had pushed me out of my chair, and made me get up"".

"This motion falls very much on my generation," she said.

"Because I want to go home and tell them: 'My church accepts us'.

'My church accepts all of us."

And the last speaker we'll quote is the Rev Helen Roud, who is the Vicar General of the Diocese of Christchurch – and who began by recalling the pivotal act of her priesthood:

"I stand, and I raise the bread, and I break it.

"And I'm deeply aware that I am a broken person. And the people before me are a people of brokenness, and I'm part of a church which is full of brokenness.

"It is the church that Christ died for, and rose for.

"I come from Christchurch – (which is) a broken city, in more ways than one – and a diocese, (which is also) broken. Not always sharing understandings of Scripture.

"I look around us now, and I see and hear brokenness.

"But we are all saved by grace. Grace: it's a beautiful word. And I see grace being outworked, as in our brokenness we try to work and resolve (this) together.

"And I see salt and light in what is before us.

"I've seen, in many congregations, people walk out the door for all sorts of reasons.

"Often over small hurts, that are hiding bigger ones.

"And I always try and leave the door open.

"And my prayer, especially for the people of Christchurch, is that among us all, and across our tikanga, is that through this motion, doors will be left open.

"Doors open for all.

"By grace we are saved. Thankyou."

At about 5:45pm, the Chancellor, Bruce Gray, QC, explained the sequence and the options by which the motion would be voted on, and a decision made – voting by conscience, by house, by tikanga, etc.

Immediately after his explanation, the president of the Synod, Archbishop Philip Richardson, declared an adjournment for the evening.

Voting on the motion is the first order of business for Wednesday.