Auckland-based biblical scholar Dr Emily Colgan has challenged Anglican women to unmask the dangerous ‘either or’ thinking embedded in both biblical and modern language that links women and the earth. 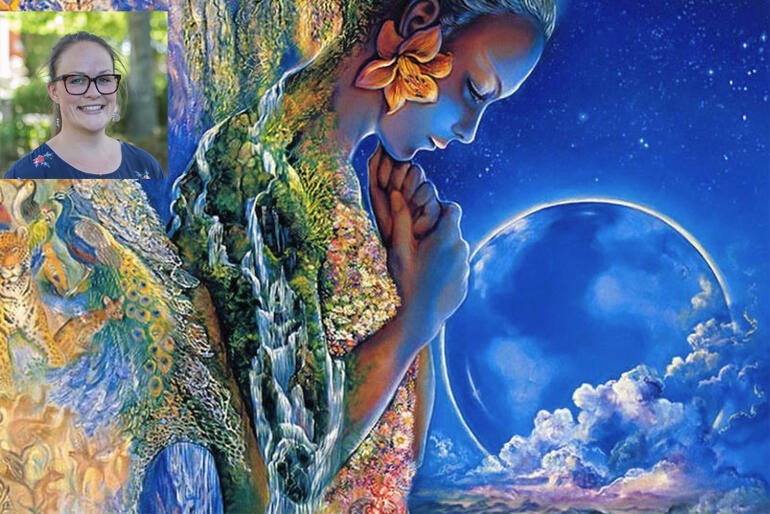 Dr Emily Colgan, who is a senior lecturer in Biblical Studies at Trinity Methodist Theological College in Auckland, has challenged Anglican women to rethink biblical images that fuse and denigrate both female bodies and the land.

The 2022 AWSC webinars run on the third Thursday of each month and tackle topics arising from studies undertaken by women in ministry for the Anglican Church in Aotearoa, New Zealand and Polynesia.

In the first webinar, ‘Women and Interconnectedness: Ecological interpretations of scripture’ presenter Dr Emily Colgan described how feminine and land-based metaphors in sacred texts and can influence real world assumptions, attitudes and behaviours towards women and the earth – without the readers’ knowledge.

At the heart of the problem, said Dr Colgan, is a mindset formed in ancient times and perpetuated in ‘the West,’ that categorises everything into an ordered list of value-laden opposites, known as a ‘dualist hierarchy’. In that system of thinking, she said, women and land are linked together on the ‘inferior side’ of the chart.

“Attributes that we associate with earth have traditionally been associated with women too. Words like nurturing, lifegiving, fertile/fertility, barrenness, purity, beauty, virginity, feeding/nourishing, generosity... and also untamed, wild, fruitful, desolate, polluted, economically valuable are all associated with both women and the Earth.” she said.

Dr Colgan explained how these female-earth linking concepts run through modern language and modern thinking as well as in biblical thinking.

She went on to warn that this language forms part of bigger patterns of thinking on gender, land and race which lies beneath much of ‘Western’ biblical interpretation.

The problem is when dualist thinking places the world into a two-sided list of characters or qualities, which are twinned as opposites of greater or lesser value, she said.

Some of these false opposites pit pairs of things against each other like so:

This may look tidy Dr Colgan says, but unfortunately it distorts reality with potentially dangerous effects – especially in religious thinking.

“Dualistic thinking ...is ‘reductionist,’ meaning it reduces everything to  ‘either or’ thinking, to “if not one then the other” thinking.”

Emily pointed out that dualistic thinking doesn’t allow us to see how things really are,

“It doesn’t reflect the complexity of reality and the blurry fuzzy beauty of our world.” she said.

She shared another caution with the Anglican women tuning in.

Perhaps these categories wouldn’t matter she said, if they didn’t build in positive or negative judgements on each side. As it stands now, these categories have fed the same value system that justified the domination of women, the Earth and non-Western cultures and people.

“Everything on the assumed ‘superior side’ of the pair – God, men, Western, etc – is seen as separate from, and having power and priority over, the “inferior side” of the pair – Earth, women, non-Western peoples and cultures etc.” she said.

“So working out of this way of thinking gives the impression that domination (or right to rule) is both justified and natural – and we get from this a whole bunch of oppressions and exclusions which are justified by this very real logic of domination.”

“It is quite a vicious and violent cycle and forms a complex and pervasive web of interlocking relationships of power and oppression.” she said.

To watch Dr Colgan’s full talk, including her interpretation of female-land linkages in specific biblical texts, you can go to the webinar now available on Youtube here: Emily Colgan on Interconnections: Women and Earth

The next Anglican Women’s Studies Centre webinar will take place this Thursday 17 March at 7pm, led by Jax Clark and will look into the ‘Gift of Desperation,’ an insight into the pastoral benefits of the 12-step programme recovery approach used by Alcoholics Anonymous and Al-Anon and how its characteristics of honesty, openness and willingness may be able to enhance wider church culture.

To get the Zoom link to join future AWSC webinars, please send your request to join to AWSC administrator, Ceridwyn Parr through: anglicanwomenstudies@gmail.com