The NZ Bible Society has published a waterproof New Testament to commemorate WWI 100 years on. 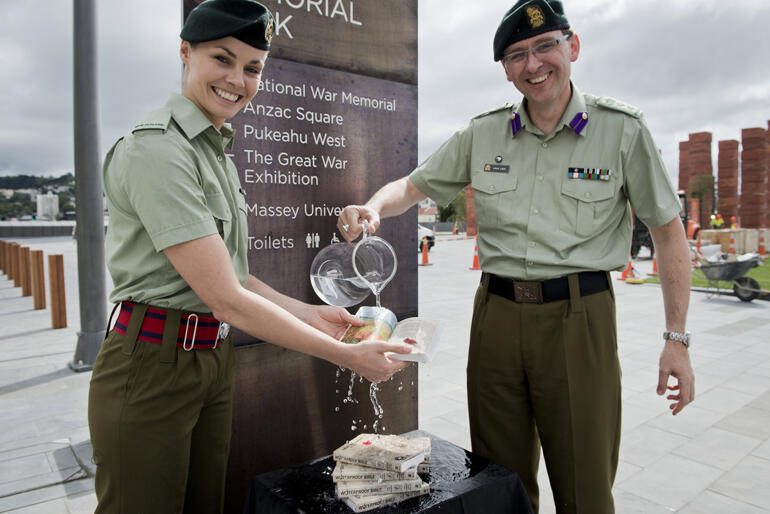 The NZ Bible Society has published a commemorative Defence Force New Testament to mark the centennial of WWI.

1500 of the newly minted New Testaments (with Proverbs and Psalms) will be gifted to the NZ Defence Force in an official ceremony next month.

"This commemorative edition of the New Testament reminds us of this sacrifice made by New Zealanders 100 years ago, and of the book that brought so many of them peace and comfort as they fought."

The Bible's cover pictures Kiwi troops in a trench in war-time France, while inside are wartime photos from the Alexander Turnbull Library archives, as well as Army, Navy and Air Force prayers.

Also printed in this edition is the story of Chaplain-Major William Grant – the first NZ chaplain to lose his life in WWI.

Printed on plastic pages in the USA, the new books are 100 per cent waterproof and tear resistant. And at 25% lighter than the Bible Society's previous waterproof edition, this New Testament can be more easily deployed in harsh conditions.

Principal Defence Chaplain, Lance Lukin says that scripture still has a big impact on women and men in the armed forces.

"The reality is we put our people's lives at risk."

"So when people are facing their mortality, they start to question what life is about – and they’re looking for strength to get through these situations.

"It's the comfort the Bible brings and its words that people can draw on in dark times."

Chaplain Lukin has no doubt the commemorative New Testament will be held in high regard.

"I know how popular the previous edition has been. It's a great gift from Bible Society, and in reality there will not be enough Bibles to keep up with demand."