Opening our eyes to trafficking 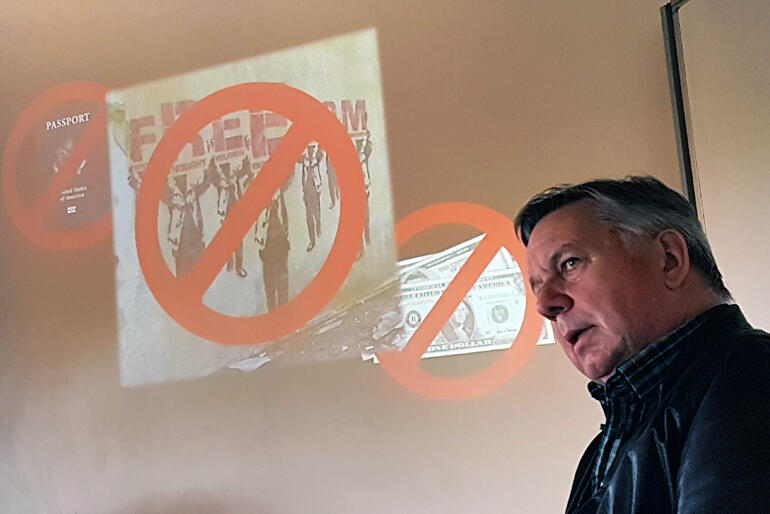 Archbishop Sir David Moxon has called on churches in Aotearoa, New Zealand and Polynesia to recognise and respond to human trafficking in our region.

In a seminar at Vaughan Park, Archbishop David Moxon has joined fellow advocates for the elimination of human trafficking to outline how we can help identify and put a stop to trafficking in the Pacific.

As an isolated and supposedly clean, green and pure country, we don’t usually associate the dark and sordid crime of human trafficking with Aotearoa.

Police have documented cases of people who were brought to Aotearoa under false pretences to work in forced-labour conditions. This happens especially when there are unfilled labour demands in our hospitality, nursing, horticulture, construction and fishing industries.

Sr Gemma Wilson from Aotearoa New Zealand Religious Against Trafficking in Humans (ANZRATH) spoke about the challenges of anti-trafficking work, while  Rev Chris Frazer (a Diocese of Wellington deacon for social justice) shared how she works alongside the Department of Immigration and other churches to help authorities intervene in human trafficking situations. Also speaking on the issues was Clare Mercer, a young Christian leader who has  taken part in anti-trafficking work in Greece.

Human trafficking is the second largest illicit crime in the world, reaping billions of dollars in illegal profits every year.

It is defined as the “act of recruiting, transporting, transferring, and harbouring a person through the use of force or other means of coercion for the purpose of exploiting them.”

“We have to clean up our own back yard first”, said Archbishop David, “for example the church has to be extremely vigilant and aware over the question of paedophilia from human slavery.”

Millions of children are trafficked worldwide for prostitution each year, or for the production of sexually abusive images, as well as to be used as cheap or slave labour.

At least 70% of the victims are women and girls, and 50% of those are children. There are an estimated 7000 sites depicting violent child sex abuse that are visited by approximately 50-70,000 New Zealanders each day, according to the statistics from a 2017 Dept of Internal Affairs report.

Deception, fraud and abuse feature prominently in the stories of trafficking victims who set out as overseas workers desperate for work or study in our country. They can quickly fall victim to deceit and dishonesty.

“I knew of an orchardist in Aotearoa – a Christian – who thought he was doing Solomon Islanders a favour by giving them accommodation and meals for four months, but he kept their passports in his safe and they couldn’t leave, had no transport, and had nowhere to go.” said Archbishop David.

Both in Aotearoa and the Pacific, sharp socio-economic divides leave people living with plenty existing alongside those who are destitute and desperate.

“It’s been said that human trafficking and exploitation happens where need meets greed’” said Rev Chris Frazer, as she traced the lines of human trafficking through our colonial history and back to the colonists’ European origins.

“Aspects of human exploitation and slave labour stems from a society’s ‘supply and demand.” she said.

Despite the billions of dollars spent on human trafficking awareness, it will continue to happen, said Rev Chris, while we continue to demand lifestyles that rely on the underpaid labour of impoverished people to meet our demands.

Recently the New Zealand Nurses’ Association studied their industry and found enough suspicious cases to prompt a conference this year on mitigating the abuse of migrant nurses.

The alluring promise of earning a wage way beyond what nurses could earn in other countries was common. Seductive advertising and a good working environment were enough to push people seeking a better life to leave their families and familiar homelands – and to pay a fee for the privilege.

ANZRATH anti-trafficking NGO founder Sister Gemma Wilson relayed the typical features of a trafficking story from her decades working in the field.

“A victim of people trafficking is deceptively recruited into exploitative conditions. They are bonded to their traffickers through an unpayable debt and kept in slave-like conditions. Every country is affected by human trafficking whether as a country of source, transit or destination. It is estimated that two-thirds of the victims are from Asia-Pacific.” she said.

ANZRATH advocates collaboration between like-minded organisations in Aotearoa NZ and the Asia Pacific region to enable more people to recognise and close down avenues for human trafficking.

These could include: educating people on the issues via awareness meetings, articles, presentations to groups, writing letters to firms (such as chocolate or clothing brands) to call for checks on human exploitation in their supply chains, or writing to the Minister of Immigration to request laws to oblige big corporations to publish their supply chains.

"Modern slavery and exploitation in New Zealand is real and recent," said the seminar presenters.

In 2016, a jury in the High Court at Auckland found 46-year-old Faroz Ali guilty of 15 human trafficking charges in a scam that enticed and exploited Fijians to work in Aotearoa NZ. They were sold a dream of working as fruit pickers and earning almost seven times their weekly wages in Fiji.

But when they arrived the false promises soon unravelled and they found themselves being forced to work illegally for long hours, sleeping on the floor of an overcrowded basement, with little pay (if at all), and being threatened with deportation if they complained. The guilty verdict was a huge win for efforts to stamp out trafficking in this country, and the Government has vowed to crack down on migrant exploitation.

Forced marriages (Shakti), is a major problem here in Aotearoa NZ and underage street prostitution or ‘survival sex’. If you think that Aotearoa NZ is a safe place for migrants to live, think again.

There are more slaves in the world today than there were before the abolition of slavery nearly two hundred years ago. The most common human trafficking types are for sexual exploitation, forced labour, human organs, forced marriages, babies for adoption, child soldiers and children for begging.

The common causes are poverty, lack of education, culture, greed and demand. Here is how some of the victims describe their experience:

In answer to the question “What can we do as a church?” Archbishop David encourages us to be more aware of who is in our communities, especially where immigrants and refugees reside and work. New Zealanders should watch for at least three things when encountering these workers.

If they answer “No” to any of these questions it is likely that they are victim to human exploitation/slavery and do not know what to do about it. They are rendered helpless and under the authority of people who profit greatly from their labours. Other signs of human trafficking include:

Young Clare Mercer has witnessed a lot overseas and seen survivors slowly adjusting to freedom while in Greece. Her clients have endured many forms of violent abuse, sexual exploitation and labour-intensive slavery.

This transformational work with the survivors has helped them to rediscover who they are and to re-establish self-value, enough to somehow integrate back into society. Young workers like Clare contribute to this vital restorative work.

“What can we do as a church?” About 84 per cent of the world’s population is religious, according to The Pew Research Center and religious leaders can create lasting, positive change by increasing awareness and action to end modern slavery, human trafficking and exploitation.

The Global Freedom Network has obtained commitments from faith leaders through their signing of the Joint Declaration of Religious Leaders Against Modern slavery in 2014 and encourages ongoing commitment by providing support for change.

At the local level, dioceses, pīhopatanga and parishes can share the information on modern slavery and human trafficking. Pamphlets in our church or marae foyers are a first tangible step we could take as a church.

Connect ecumenically to perpetuate awareness or find out who are doing similar initiatives already. Connect with others in our cultural and social contexts. What can we do as a church? Let’s not look the other way.