The Archbishop of York enhances the mana of Sir Paul – by insisting that he, John Sentamu, possesses the best claims for where the bishop should be buried. 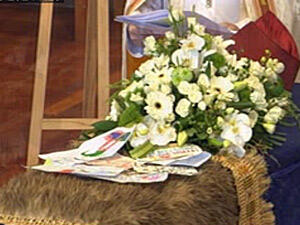 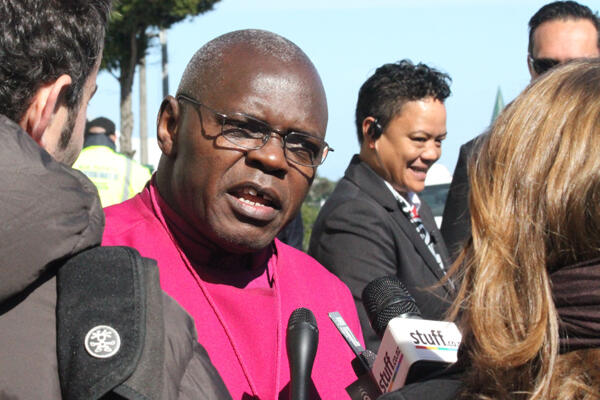 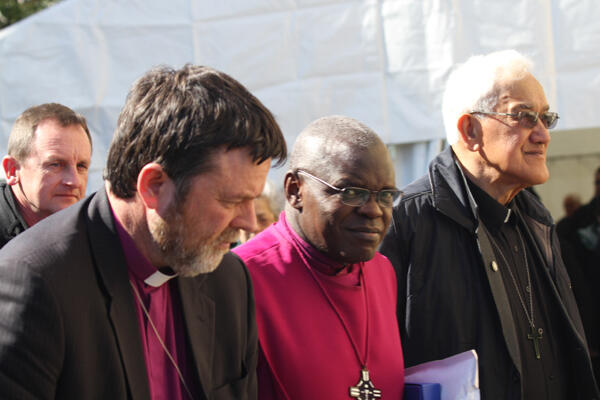 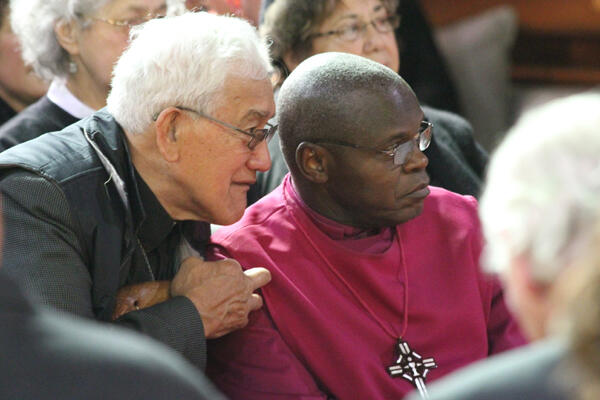 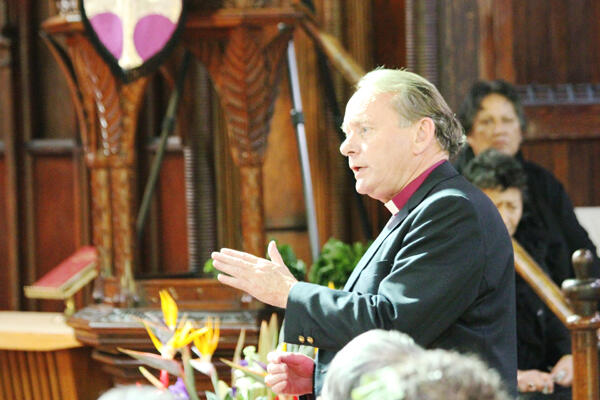 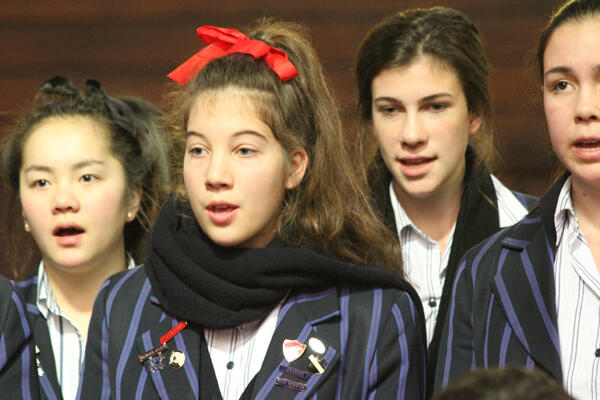 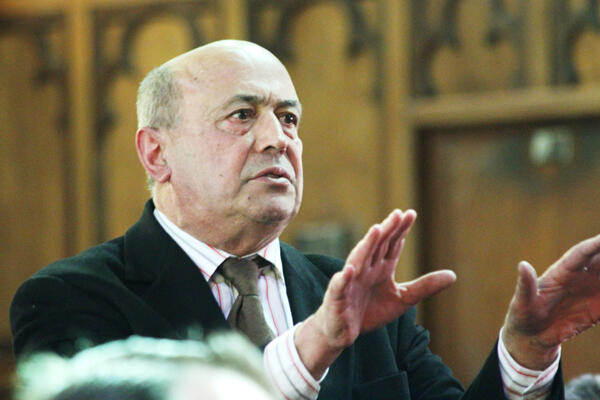 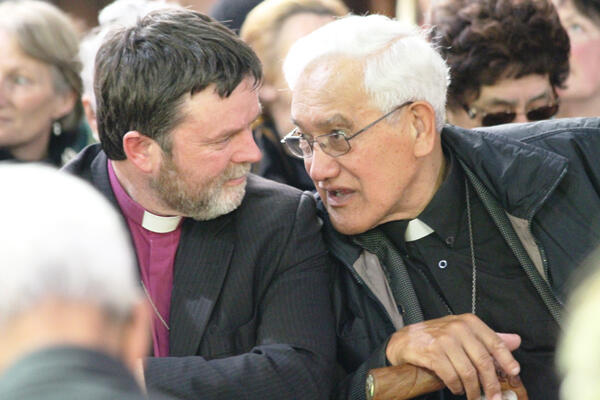 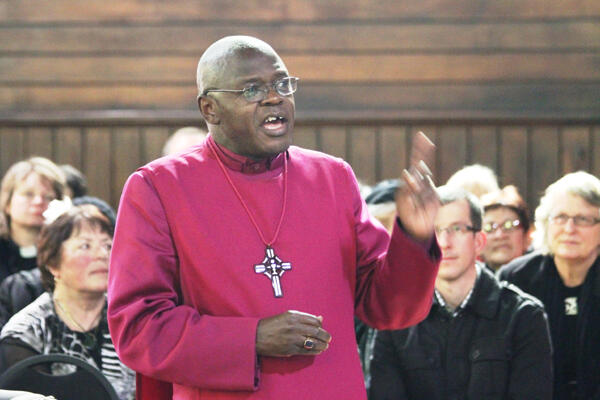 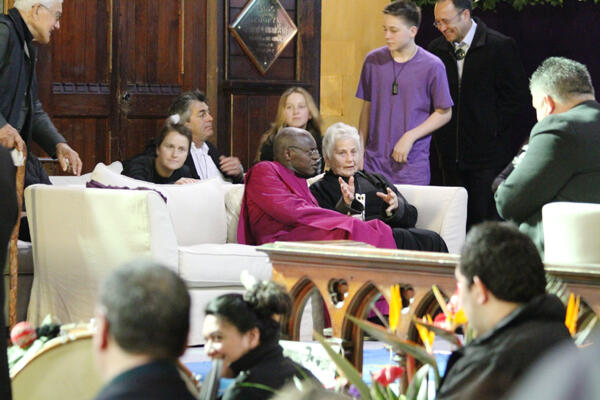 Never mind claims that Sir Paul Reeves ought to be going home to Taranaki.

Or maybe to Manawa o te Wheke, to lie beside Bishops Fred and Manu Bennett in Rotorua.

No: As far as the Archbishop of York was concerned this morning, the matter was settled.

Here Dr John Sentamu was, barely 90 minutes after he’d landed in the country, proclaiming to the hundreds of Maori gathered at the Church of the Holy Sepulchre for Sir Paul Reeves’ tangi that he’d be taking Sir Paul with him back to the UK.

Their claims to Sir Paul didn’t stack up against his, he reckoned.

Archbishop John was jesting, of course, and the whanau loved his wit – and the fact that he had cottoned on to the fact that such claims for repatriation uphold the mana of the tupapaku being contested.

Archbishop John is a quick wit, and a quick study.

But when he laid out his claim, you could see his thinking. Because of Sir Paul’s baptism – and because he was a deacon, priest and bishop, Sir Paul belongs to the whole church, he said.

Moreover, because he was a knight of the realm, and knighthoods are bestowed by the Queen… there was a strong case for packing him back to the UK.

As we’ve said, the archbishop relented. Said he was prepared to settle “for taking Sir Paul home with me in my heart.”

Which was probably prudent. Because Bishop Kito Pikaahu said Archbishop John could indeed have Sir Paul – but only if he was prepared to fly a couple of thousand Maori back to the UK with him.

Archbishop John only spoke for a few minutes. But he was in top form – and he paid eloquent tribute to Sir Paul.

He told the house that Sir Paul and he had exchanged promises. They’d vowed that whoever died first, the survivor would go to the other one’s wake.

And Archbishop John told the mourners that when Sir Paul finished up as Governor-General and became the Anglican Observer to the United Nations – he was, in fact, far more effective as an observer than many of the UN’s permanent members.

Archbishop John finished his korero with a Ugandan hymn – one verse of which translates as:

God, you did not lose him when you gave him to us

And we do not lose him now when we give him back to you.

The tangi is drawing to a close, and final preparations are being made for tomorrow’s 11am state funeral at Holy Trinity Cathedral in Parnell, which was Sir Paul’s parish church.

The service will be according to the rites prescribed in He Karakia Mihinare of Aotearoa/the New Zealand Prayer Book.

The three archbishops will preside, and there will be eulogies from four speakers, including Archbishop David Moxon and Judge Sarah Reeves, one of Sir Paul and Lady Reeves’ three daughters.

And the honour of preaching the sermon at Sir Paul’s funeral service belongs to Bishop Philip Richardson, who was ordained a priest by Bishop Sir Paul 32 years ago, when he was Bishop of Auckland.

Understandably, Bishop Philip feels “quite daunted” and humbled by preaching at the funeral of such a leader.

“As a young man,” says Bishop Philip, “Bishop Paul had encouraged me to see the wider canvas on which our ministry had to be painted.

“We were called into the whole world – and not to some club distinct from the world. The church is simply a vehicle for God’s work of reconciliation.”

Philip Richardson was barely out of his teens when he graduated from his theological studies – and he was too young to join the ordination stream.

So Bishop Paul had arranged for him to spend time at a theological seminary in South India – and his experience of Christians living out the gospel in the midst of utter poverty had shaken him, and turned his world upside down.

Tomorrow morning – the last morning of Sir Paul’s stay at Holy Sepulchre – will begin as the two previous days have dawned, with a 7am Eucharist.

The funeral cortege, which will include busloads of Sir Paul’s Taranaki whanau, will depart from Holy Sepulchre at 9.30am, and wend its way slowly through Auckland Domain.

When it reaches Parnell Rd, the hearse and the family will be met by a military escort – which will slow-march beside the cortege to the large forecourt of the cathedral, which will become a marae atea.

There, the casket will be draped in the Reeves whanau korowai – which has been uplifted from Te Papa for the funeral – and dressed also with Sir Paul’s mitre and crosier, and various family taonga, including some placed by his mokopuna.

His mokopuna will be involved again during the committal, when they will join Archdeacon Tiki Raumati in asperging and censing the casket.

When the funeral is over, Sir Paul’s casket will be taken from the church, out across the forecourt – no doubt accompanied by thunderous haka – to the waiting hearse, which will bear him to a private burial service in the grounds of his old seminary, St John’s College in Meadowbank.

There is, perhaps, one other telling detail about the manner in which Sir Paul’s casket will lie in the cathedral during his funeral service.

Sir Paul’s casket will be brought into the service, feet first.

That’s how most of us will stay throughout our funeral services.

But because he was a bishop, Sir Paul will then be rotated through 90 degrees in the sanctuary.

So one last time, in death as in life, he faces his people.