The World Council of Churches and the ACT Alliance have joined Islamic Relief and Soka Gakkai International in an interfaith programme that links faith groups combatting deforestation with indigenous people fighting for sovereignty and care for Creation. 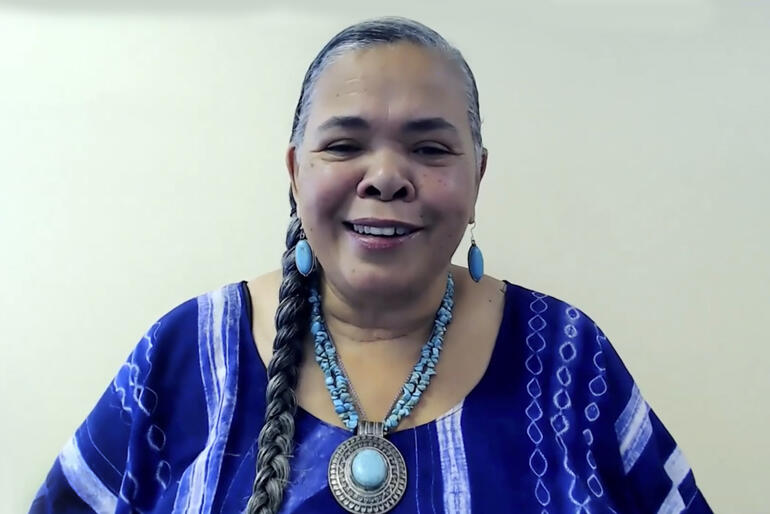 At an online conference on 29 September the World Council of Churches and the ‘Action of Churches Together’ Alliance joined with an interfaith coalition to back indigenous people’s rights to sovereignty over their cultures, lands and resources as a key part of caring for Creation.

The webinar looked back to August 2019, when nearly 1000 religious leaders agreed to work together on countering deforestation through the ‘Faiths for Forests’ declaration, a global agreement of faith leaders that names halting the destruction of rainforests as a spiritual responsibility of the highest priority.

Indigenous spiritual leaders and representatives of the United Nations, Christian, Muslim and Hindu faith leaders meeting online this year discussed the impact of colonisation and racism on global efforts to counter environmental destruction and climate change.

US Indigenous and Black Lives Matter peace campaigner Audri Williams opened the meeting with a challenge to look at the impact of racism, colonisation and slavery on Black and Indigenous peoples and on environmental destruction.

She asked the meeting to consider how racism and colonialism impacts on children,

“What racism looks like, what it feels like for a child is very painful,” she said. When a child is subjected to racism, they begin to ask: “What makes me different? What makes me not worthy?”

“When you have lived under that boot of oppression, that boot of colonialism and racism, …you have to learn certain survival techniques – just to live in harmony within yourself, and within your community and with the earth.”

As a grandmother, Audri challenged the group to look at the experience of children and how they are responding to the global climate crisis.

“We can read about what is happening with mental health with children across the world, as they are contemplating what they are inheriting.”

“When the Maasai say hello, the words they say mean ‘How are the children?’ So when we ask that question right now – [the answer is] our children are not well. It’s not just the physical challenges and the health challenges, it’s the mental health challenges.”

“The question for us is; ‘How do we begin to shift the actions that we’ve taken, the actions where we have lived carelessly in our relationship with the environment as individuals and carelessly with our organisations?’”

Joy and Collins shared the experiences and concerns of young people in Africa, Asia, Latin America and the Pacific, highlighting problems that they and their communities face right now including: poverty-led deforestation for burning fuel, extreme weather events and the inundation of lands, crops and homes due to sea level rise.

Senior advisor on forests and climate for the United Nations Environment Programme, Dr Charles McNeill spoke about the work of the Interfaith Rainforest Initiative, which brings together major faith groups and indigenous communities to advocate for forest protection.

“The evidence is overwhelming that Indigenous people’s cultures and ways of life provide significant benefits to our planet’s forest, climate and biodiversity through the stewardship and safeguarding of their lands.” he told the meeting.

“The record is also clear, that when Indigenous culture and rights are undermined, then the protection of the environment that they can provide is also compromised.”

Dr McNeill reported that in many places colonisation has placed indigenous people on the front lines of the climate and deforestation crisis, where their lives and livelihoods are threatened by illegal logging and mining operators, poachers, drug traffickers, agribusiness and even certain Governments.

Charles reported that recently religious groups have been able to advocate alongside indigenous people to mobilise the wider public for their cause. He added that today the cost of indigenous people’s work to protect their forests and homes is still often deadly in the face of corporations and states that violently seize the resources they aim to protect.

“In 2020 alone, 227 environmental rights activists were killed while protecting their forests and homes, most of whom were indigenous people.”

Dr McNeill acknowledged that via colonisation and racism, major religions have often been complicit or actively taken part in the oppression of indigenous people. In the light of that history, today the Interfaith Rainforest Initiative is a way that religious leaders can reconcile with indigenous peoples in joint action to protect the earth.

He reported that the Interfaith Rainforest Initiative has made an encouraging start in five countries that together hold 70% of the world’s remaining tropical forests: Brazil, Colombia, the Democratic Republic of Congo, Indonesia and Peru.

The Interfaith Rainforest Initiative advocates with Governments to demonstrate how Indigenous community-secured land and resources are essential prerequisites for at least six better environmental outcomes for forest health.

Under traditional indigenous land management, evidence shows that there are:

6. Better social, environmental and economic outcomes overall than forest managed either by public or private entities, including in protected conservation areas

In its first three years, religious leaders from the Interfaith Rainforests Initiative stood alongside indigenous human rights defenders in Peru, advocating with the country’s Justice Minister to gain a legal mechanism to protect their rights.

In Columbia, faith leaders lobbied Government to have forest protection and mitigating climate change embedded as priorities in the national plan, and played a critical role in driving a wide public call for change that led to landmark legislation to criminalise deforestation.

In the Democratic Republic of Congo – which is host to the world’s second largest rainforest after the Amazon – Congolese faith leaders backed the indigenous Bambuti (or Mbuti) people in their fight to gain an historic law recognising their human rights.

And in Indonesia, an Islamic-led interfaith coalition produced resource guides and books on forest protection that are being disseminated to millions of students throughout the country.

To view the (1hr23m) webinar go to the WCC news story:
· Webinar reflects on how racism, colonialism exacerbate impacts of climate change

The Interfaith Rainforest Initiative provides a platform for religious leaders to work hand-in-hand with indigenous peoples, governments, civil society organizations and businesses on actions that protect rainforests and safeguard the indigenous peoples that serve as their guardians.

The initiative was launched in June 2017 at the Nobel Peace Center in Oslo, Norway in a first-of-its-kind summit of Christian, Muslim, Jewish, Buddhist, Hindu and Taoist religious leaders, climate scientists, rainforest experts and indigenous peoples’ representatives from Brazil, Colombia, the Democratic Republic of the Congo, Indonesia, Meso-America and Peru.