Bishop. Archbishop. Mentor. Friend. The news of Sir Paul’s death has caused our Archbishops to reflect on his contribution to the church – and to their own lives. 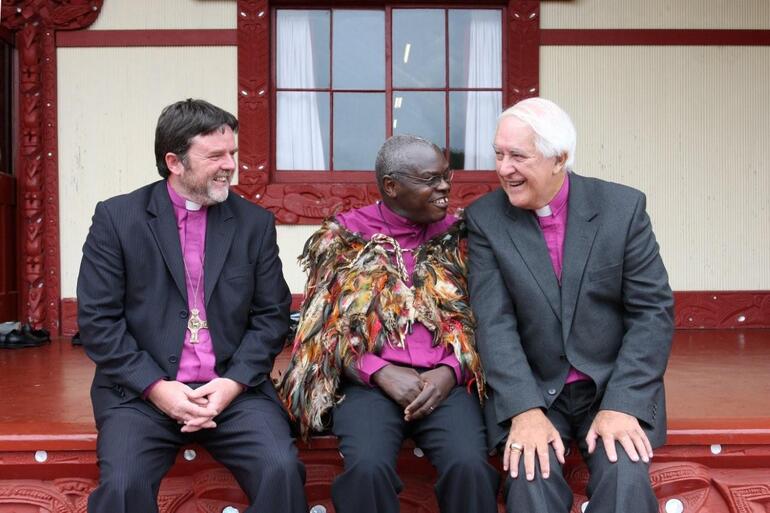 Bishop. Archbishop. Governor General. Political adviser. Academic. Mentor. Friend. The news of Sir Paul Reeves’ death has caused the three Archbishops to reflect on his contribution to the church here and in the Pacific – and to their own lives.

Sir Paul was, among other things, a high-profile bicultural pioneer.

“He was holding together the two cultures in himself,” says Archbishop David Moxon. “And he made that bicultural identity, that way of life, visible and effective long before the new constitution of 1990.”

Long before the 1998 Hikoi of Hope, Sir Paul had mobilised the church on justice issues, particularly around poverty, justice and peace.

When Sir Paul was chosen as Governor General, says Archbishop David, he became a “Pihopa-a-Iwi”, a bishop who demonstrated Christian ministry to society at large.

And in his later assignments, says Archbishop David, as Anglican Observer to the United Nations, in Guyana and Fiji for the Commonwealth, and as an election observer in South Africa and Ghana, he modelled that role in the wider world.

Sir Paul had known too, firsthand, and in intimate detail, the struggles that took place as Maori sought a place in the sun in Aotearoa New Zealand, says Archbishop David.

In 1990, for instance, on the 150th anniversary of the signing of the Treaty of Waitangi, he’d sat at Waitangi as Governor General, beside the Queen, as Bishop Hui Vercoe famously declared: ‘We have been marginalised, Your Majesty, in our own country…’ [1]

Sir Paul later advocated for a group of Taranaki iwi to the Waitangi Tribunal, and in 2009, when a treaty settlement had been reached, the iwi made the first public statement of forgiveness from an iwi to Crown in response to its apology.[2]

The bishop was at work there. And whatever Sir Paul did, and in whatever role he was cast, says Archbishop Winston Halapua, “he never ceased to be a bishop.”

“Part of the calling of a bishop is to have a Christian impact not just within the church, or a particular diocese – but within the wider community and society.”

“The words of the Prayer Book spring to my mind: ‘Christ is the Good Shepherd who knows and cares for everyone of the sheep in different folds…’ Sir Paul’s leadership,” he says, “modelled the Good Shepherd.”

His “respect for all people,” was also evident in Polynesia when he led the Fiji Constitution Review Commission.

“Fiji owes Bishop Sir Paul a debt of gratitude for the huge amount of work he did then to help Fiji move forward to democracy. At the time the Commission was doing its work, I was Dean of Suva Cathedral where Bishop worshiped. We knew something of his immense effort.

“The findings of the Commission remain a prophetic voice for Fiji. A key sentence from the Report reads: ‘Progress in a multi-ethnic society is achieved when its citizens realise that what is good for their neighbour must ultimately be good for them as well, when difference and diversity are seen not as sources of division and distrust but of strength and inspiration.’ [3]

“Whenever we met since – whether it was at a funeral, a wedding, a banquet, at St John’s College or on the road – he would never fail to ask me: ‘How is Fiji?’”

Up until 1978, Te Pihopa o Aotearoa was a suffragan to the Bishop of Waiapu. In other words, Bishop Manuhuia Bennett reported to the much younger Bishop of Waiapu, Paul Reeves.

A recommendation that Te Pihopa o Aotearoa should be a full bishop, with a license to minister when and where he saw fit, went to the 1978 General Synod.

Maori knew that the Pakeha bishops would follow Bishop Reeves’ lead. Had he opposed the move, he would kill it.

He didn’t. The recommendations sailed through the synod – and a key step in the emancipation and empowerment of the Maori Anglican church had been taken.

He was instrumental too, says Archbishop Brown – along with Bishop Manu and then Archdeacon Whakahuihui Vercoe – in the creation of a scheme in which lay Maori Anglicans, with sharp minds, good Bible knowledge, a memory for karakia and himene and the respect of their hapu and iwi, became ordained Minita-a-iwi, ministers for the people.

“That scheme,” says Archbishop Brown, “was the saving of the Maori Church.”

And as far as Archbishop Brown  is concerned, when Paul Reeves was elected in 1971, at the age of 37, as the 10th Bishop of Waiapu, he brought “a breath of fresh air” to the episcopate.

“I was quite young myself then. And in the presence of a Bishop… you tended to stiffen and be ill-at-ease. But with Paul, you could relax, and be yourself. Being a young bishop, he was still into his sport. We played golf together. He was full of fun.”

Archbishop David, who has known Sir Paul since 1974, agrees. Back then, David Moxon was a lecturer at Massey University in Palmerston North, which is in the Diocese of Wellington.

But when he was exploring whether he might have a future as a priest, he became an ordinand to the Bishop of Waiapu, Paul Reeves.

“I was drawn to his leadership,” says Archbishop David, “and the opportunities for ministry and mission he was providing. He was a powerful role model for me.”

Inspiring? Yes, says Archbishop David. But severe? Far from it, he says.

“When he was a young lecturer in  church history at St John’s College he was called ‘The Champagne Man’ – because he was always bubbly, invigorating and never dull.

“As a bishop, you could be relaxed and human with him – and he would be real and direct with you.”

Winston Halapua left Fiji in 1996 to become a principal at St John’s College in Auckland, and to teach at the University of Auckland.

Sir Paul advised him then to “engage with the people and listen to what they were saying”. Fourteen years later, Winston Halapua returned to Fiji as its diocesan bishop and archbishop – “and his advice remains a treasured gift.”

Archbishop Winston says he counts himself “deeply privileged to have known the leadership and friendship of this great and good man.

“Our hearts go out to Lady Reeves and the family he so cherished.”

[1] After Bishop Vercoe’s historic address at Waitangi, someone in the official party had asked Sir Paul:“Is this one of your turbulent priests?” Sir Paul replied: “Yes. Isn’t he good’” (Interview for Taonga magazine, Winter 2007.)

[2] “And now it is finished”, former governor-general  Sir Paul Reeves said… “Our forgiveness comes from our painful history”, Sir Paul, deputy chairman of the Port Nicholson Block Settlement Trust, said before reading the statement. “And apology, forgiveness, leads on to the greatest prize, which is reconciliation.” (Dominion Post, July 31, 2009.)

[3] Towards a United Future: Report of the Fiji Constitution Review Commission 1996 xix