Dunedin-based commemorations’ historian George Davis explains why it is important for people who care about indigenous human rights to remember West Papua on its Morning Star Day – the first of December. 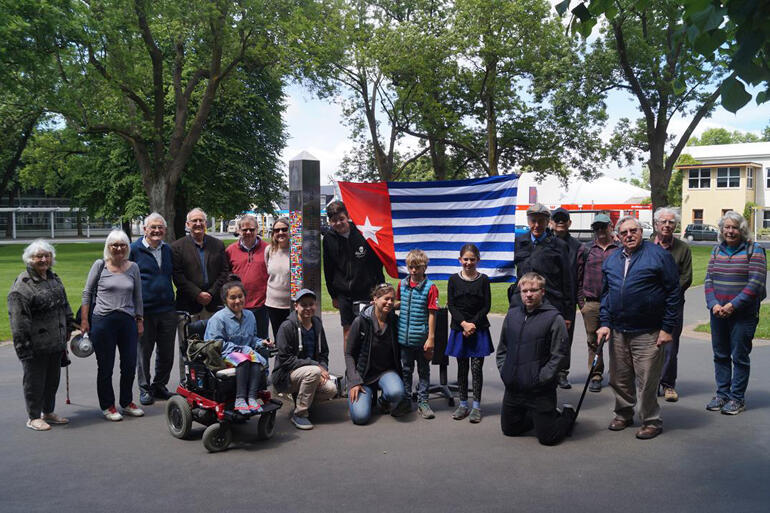 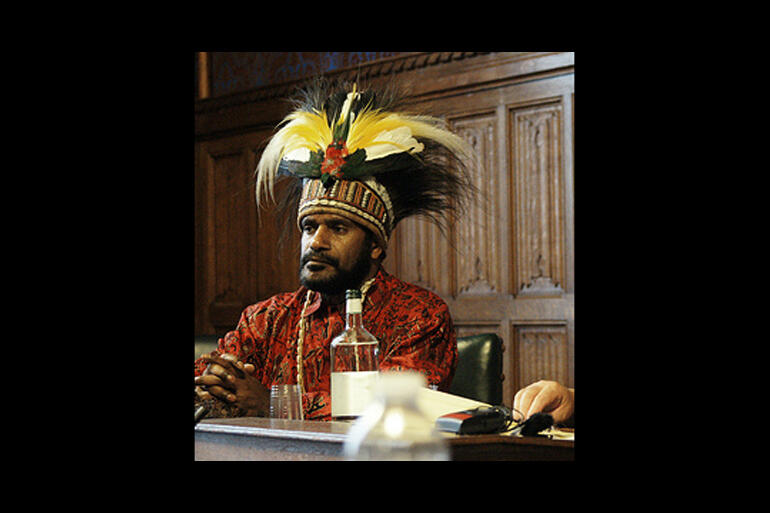 One good reason is that the country is still involved in conflict for freedom for its indigenous people which begun in the 1960s.

Indonesia, which rules the country by force has shown no inclination to allow the native West Papuans a voice in their own affairs.

More to the point the Indonesian government with the collusion of its allies in the West – USA, Australia and to a lesser extent, New Zealand, have imposed a rigorous and barbaric hold over the country using the military, the para-military and police forces at its disposal.

Any activity deemed to be against Indonesia’s political interests is quickly and often brutally quelled.

If the war in West Papua was an open and declared conflict, then at its end there would undoubtedly be many cases of war crimes to be addressed.

Most people gathered here will be familiar with the litany of human rights abuses carried out by Indonesians against the Papuan indigenous people, but such a long list becomes meaningless unless we can put a face to the troubles.

Such a face is that of Benny Wenda.

Benny Wenda is a West Papuan Independence Leader who founded the Free West Papua Campaign in 2004. He is now the Chairman of the United Liberation Movement for West Papua (ULMWP) and works tirelessly to free his people from Indonesian occupation.

In 1977 the peaceful life he lived as a child in the mountains among the Lani people was abruptly ended by the Indonesian military. They entered the village and forced the people into servitude: violence and terror became the norm.

After the destruction of the village through bombing, Benny’s grandparents took him into hiding in the mountainous jungle for 5 years.

With the death of his grandmother, his grandfather decided that it was best for the children to go to school. There, his life was one of taunts for his colour, being spat at, being derided in racist terms.

Despite all he qualified through school to go to Jayapura University of Science and Technology where he studied sociology and politics.

As recently as 27 September 2018, students at the same university were arrested for bringing to public attention the human rights situation in West Papua during the 73rd session of the UN General Assembly.

The situation of harassment still continues because the Indonesian government is embarrassed by any dissemination of knowledge about their part in the continuing repression of the peoples of West Papua.

Benny Wenda’s story continues from the UK where he was helped to escape to and be reunited with his wife. In September 2002 he had been implicated in the Abepura incident where he was unjustly accused of inflaming violence against the local police.

His trial was a farce - he had been out of the country at the time of the incident he was accused of taking part in.  Fortunately he escaped a month after incarceration and went to Papua New Guinea where activists aided him to gain asylum in the UK.

Benny's story started in a peaceful mountain life as a child, but was irrevocably changed by the intervention of the Indonesian military.

It continued in hiding in forests, a life not bettered by education in schools where racist abuse was rife.

His maturity has been marked by activism on behalf of his people, being beaten up in prison, facing false charges, and escaping death through the intervention of fellow activists. Now he lives with his family in exile in the UK.

His is but one story of hundreds. Thousands if we include all those who have died.

Why would a commemorations’ historian be interested in this? Because it is a war, even if a hidden one.  Even if publicity about it is suppressed.

Perhaps especially when key players like New Zealand, Australia and the United States remain silent on the matter.

Morning Star day is a day of hope. It symbolises hope. The rise of the planet Venus as the brightest body in the eastern skies each morning indicates hope for the people of West Papua through vindication of their right to self-determination free from the oppression of neighbouring Indonesia.

Dr George Davis is an historian who specialises in war commemorations, particularly ANZAC day. He is a member of Dunedin Methodist parish.

This blog contains the speech George delivered to a faithful band meeting to mark West Papua’s Morning Star day at the Dunedin peace pole, Museum ground on 1 December this year, the 57th year since the day began.