In Easter 2007, after the coup which brought Commodore Frank Bainimarama to power, thereby restoring the possibility of a government that served all Fijians, Taonga magazine published a collection of stories which sought to give the perspective of Fiji Anglicans on their country's plight. One of these is reproduced below. 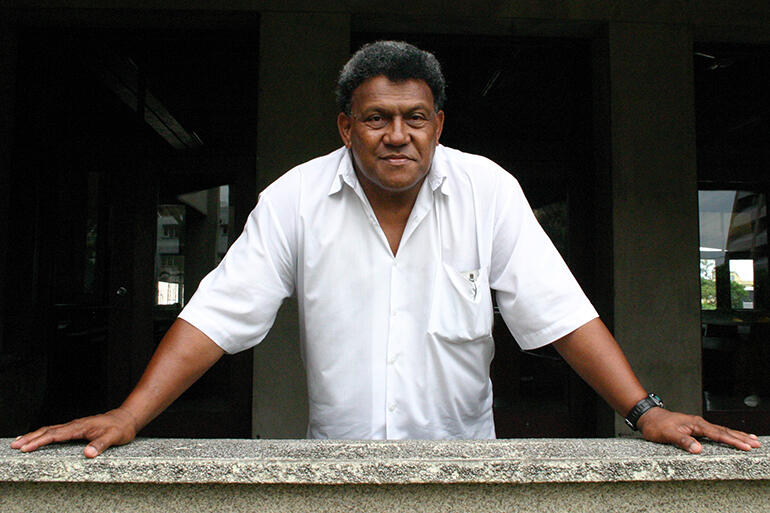 George Speight and his gang of armed rebel soldiers have stormed the Fijian Parliament and taken the Prime Minister and 35 MPs hostage.

They are imprisoned in Parliament, the Indians separated from the Fijians, with hundreds of Speight sympathisers inside the grounds, acting as human shields.

At the cathedral, meanwhile, Fereimi Cama is very much finding his feet: he'd been appointed Dean just five months earlier.

There are two Anglicans among those hostage MPs.

One, an Indian, shares a cigarette with a rebel soldier – and persuades him to ask for an Indian priest to bring Holy Communion to the hostages.

The rebel soldier made contact with Bishop Jabez Bryce.

"When the Bishop told me," says Dean Cama, "I said that sending in an Indian priest wasn't a good idea. Most of those people who were in the Parliament supporting Speight were from the interior – and they were people who had terrorised Indian farmers.

"They'd forget that he is a priest – they'd only see him as an Indian. I was going to cause a lot of problems.

His plan was to go to the parliament after church on Sunday: he'd call the mobile of the soldier who'd given the green light for Communion to be brought – and follow his instructions. Carefully.

On the Saturday evening, Bishop Jabez called him again when he realised there was no guarantee for the Dean's safety. Time to back out, if he wanted to.

"On the Sunday, after I'd called my contact, I asked my warden, Sione, to drive me down to the Parliament – because the people at the Parliament were hijacking cars that were left unattended.

"I was robed. At the gate I introduced myself, gave the name of the person who was my contact – and they opened the gate for me.

"I could tell those who were soldiers – and those who were not. The frightening thing was that the ones who were handling guns were not soldiers. And they were jumpy."

Inside the gate, Speight's men looked through the Communion set: the books, the wafers, the wine and water flasks. Everything was scrutinised.

Then they escorted him to Speight's second-floor office. Speight himself inspected the Communion set, while the Dean was made to wait outside.

And then, at gunpoint, Dean Cama was escorted to the first-floor room where the Indian MPs were being held – behind a door guarded by two armed soldiers, with a further one inside.

"I was left alone with them. I introduced myself to the gentleman who was an Anglican – and then he introduced me to Chaudhry (Mahendra Chaudhry, the overthrown elected Prime Minister) and everybody else.

"And after that, we had a Communion service. There was only one Christian among them – and 20 Hindus and Muslims.

"But they were so glad to see me. And on that first day, they all received Communion – Hindu, Muslim and Christian alike."

After that, Dean Cama was led to the parliamentary chambers themselves, where the Fijian and female MPs were being held.

There were about 20 there, and although most were Christian, there was only one Anglican, and two Roman Catholics.

All, however, were deeply grateful to see him.

The Eucharists he celebrated at Parliament were just part of his ministry during the crisis.

When the coup had first broken out, the wives and families of the hostages had approached the Dean and asked to hold a prayer vigil at the cathedral. Hindus, Muslims and Christians, all wanted to gather to pray for the release of their trapped family members.

With the blessing of Bishop Jabez, the Dean gave that idea the thumbs up, and every day of the crisis, from 12noon till 2pm, the women gathered.

When the hostages had received Holy Communion, they would give messages to Dean Cama to relay to their families, who would be anxiously waiting for his return to the cathedral.

"The wives would show me photos of their menfolk, so I would know who to pass the messages on to. One would say to me: 'What about this gentleman?'

It was, says Dean Cama, "an intense and emotional time."

And so it continued, Sundays and Wednesdays, for the duration of the 56-day siege.

"I was once asked a very awkward question by one of the rebel soldiers: 'As a Fijian, what do you think about what we have done?'

"I said: 'First and foremost, I'm a priest – and I preach about love and care for all. That is all I can tell you at this point of time.'"

Naturally, when the hostage crisis was finally over, many people no longer felt the need for the vigil.

Even so, on the 19th of every month (the 2000 coup broke out on Thursday, May 19) women still gathered at the cathedral to pray.

And when last December's coup happened, it was easy to reactivate the vigil.

A number of women, dressed in black and wearing sky blue ribbons – the colour of the Fijian flag – gathered in a central Suva park in a demonstration of peaceful resistance to the military regime.

The women, who were from civil society groups and non-governmental organisations, walked through the streets of the capital to the cathedral.

And every Thursday, between 1pm and 2pm, you will see women there still, bearing witness to their hope for a just peace, non-violence, and a democratic future for Fiji.