Archbishop of Canterbury Most Rev Justin Welby opened the Lambeth Conference with his first keynote address today, laying out the themes and directions of the Lambeth calls. 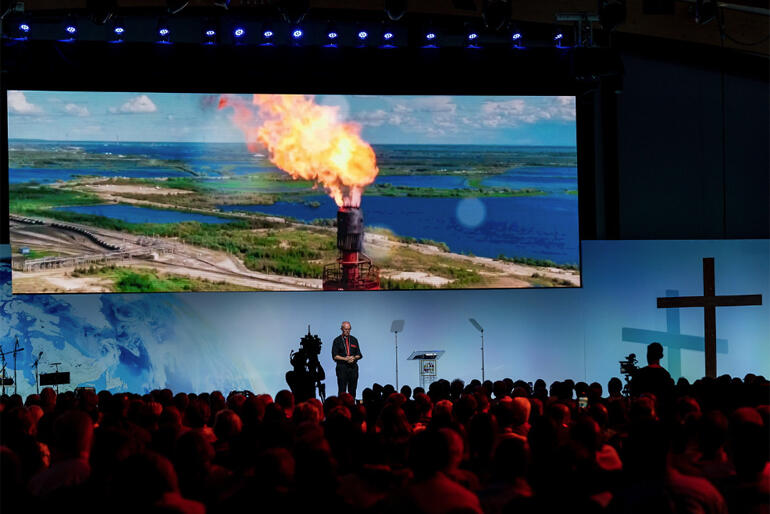 My prayer for this Conference is very simple.
It is that everyone here, whoever you are,  wherever you’ve come from, and whatever hopes and fears you may bring with you, may leave with a greater desire for friendship with Jesus Christ.
To desire Jesus is to desire God. To desire Jesus is to desire to be filled with love for God and love for His people.
Whatever else we do over the next two weeks, the one thing that is essential is that we learn afresh to hunger and thirst for God.
As 1 Peter says: “Although you have not seen him, you love him; and even though you do not see him now, you believe in him and rejoice with indescribable and glorious joy, for you are receiving the outcome of your faith, the salvation of your souls: (I Peter 1: 8-9).
Peter writes to churches that hunger and thirst for God, that rejoice with indescribable joy. And yet they experience suffering. Many – perhaps most - come here from places of suffering.  All of us will have personal experience of suffering. Some may come feeling that they are failing, or doubting God. Some may come with hidden sins of which they are ashamed. Peter, around whose letter we gather, knew fear and failure, sin and questioning.
Yet Jesus Christ stands among us by His Spirit and offers to bear our burdens, renew our hopes and faith, forgive our sins and feed us with heavenly food of word and sacrament.
Many of us come aware of  what Peter calls the roaring lions; the sense - and often reality - of attack, hostility, danger and uncertainty.
That is the main subject of this address. Although we can know joy and love Jesus Christ, the distractions and realities of our fallen world - the fears, apprehensions, pressures, and burdens we carry - can make the lions seem more important and powerful than the great and freely given love of God in Jesus Christ which we seek, desire, long for, and can find in these days together.
Lions roar, I am told, when they search for prey or when they seek to drive prey into a trap. But when they are close they are silent.
As shepherds, overseers of God’s flock, we are commanded to be aware of the roaring lions to keep our flock safe. Sometimes that is easy. At other times the lions are roaring so much that we see and hear danger all around us.
In these three Presidential addresses, I shall look first at God’s world, then at God’s church, and then at the vocation we have, as Bishops, in leading God’s church which exists for the sake of the salvation of God’s world.
Let me say first something about the detailed agenda for this Lambeth Conference.
For many years churches, Provinces and Dioceses have continued to work superbly in their own areas. But too often the Anglican Communion has been known best – where it is known at all as a Communion – for looking inwards and struggling with its own disagreements.
Those questions, especially on the Christian and Anglican approach to human identity and sexuality, will not be solved at this Conference. However, my prayer is that while keeping them in mind, we also look outwards to the entirety of the world that God loves so much that God sent his Son to die for its salvation.
We must look outwards because we meet in a time of world crisis. God heard the cry of the enslaved Hebrews. God rescued Israel under the Judges. God brought them back from exile. God supremely has given us a new birth into a living hope through the resurrection of Jesus Christ from the dead and into an inheritance that is imperishable, undefiled and unfading, kept in heaven for you who are being protected by the power of God through faith for a salvation ready to be revealed in the last time (I Peter 1: 3-4).
In times of crisis, we depend on God’s power, not our own. Whatever the crisis may be - internal to the church or external in the world - this Conference calls for a fresh start towards the goal of being the church that God calls into being, for the mission God prepares.
The world crisis is complicated. It is a crisis of economics, of war and savagery, of climate change, of international relations and of culture and belief. It is no surprise that this is a moment of decision.
Christians believe in a fallen world, where sin and self-seeking, our rebellion against God, open the way to all the many evils that surround us and always have surrounded us. Crises in both world and church will be normal wherever there are human beings, for crises come from sin.
For those here who came in 2008 we have seen since then the impact of the collapse of western banking system, the end of globalisation of trade, Covid-19, the catastrophe over world food prices and availability, a major war involving a nuclear armed power, as well as hundreds of other conflicts impacting so many, and with growing force and spread, the impact of climate change.
On top of those global changes, there have been great roaring of lions in so many of our own countries. Wars, persecution, civil disorder, poverty have struck hard at the weakest and the poorest in the flock, killing thousands who put their trust in Jesus Christ as Saviour and Lord.
In many parts of the world, especially those of the global north, culture is also changing immensely rapidly. What are often called the culture wars - the rejection by many of the old ways of settling belief, faith or ethics - find their roots in philosophical changes in the understanding of identity and of being human. The shock waves of these changes are felt across the Communion.