Here's the full text of the eulogy that Bishop George Connor gave at his friend Archdeacon Tiki Raumati's funeral. They were ordained deacons together at St Mary's Church in New Plymouth on November 30, 1965. 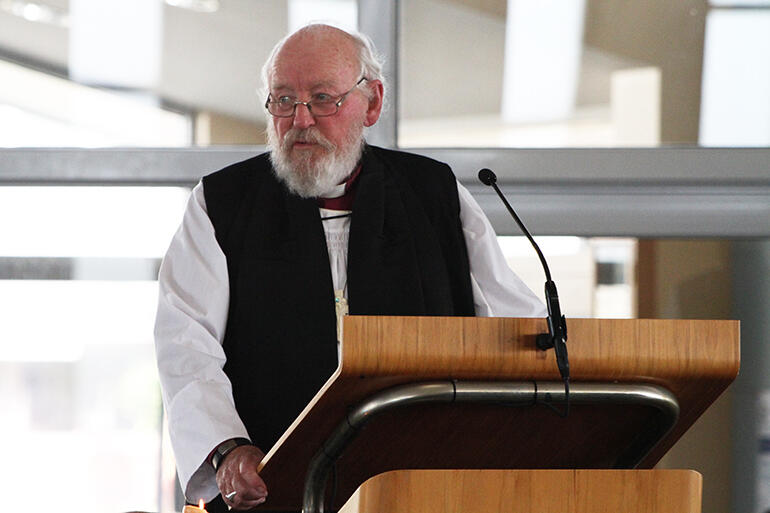 I am honoured that Tiki left the word for me to deliver this eulogy. It is almost impossible to do justice to Tiki’s full and multi-faceted life, so forgive me if I make a mistake or leave something unsaid.

Tiki’s life was shaped by the faith of Te Whiti o Rongomai, “he whakapapa ā-tinana, he whakapapa ā-wairua”, this set of beliefs and values runs through Tiki’s thinking and speaking, from the beginning to the end.

I will try to outline Tiki’s journey in the Anglican Church and also attempt to summarize some of the wonderful things that were said during his tangi.

Tiki was his father, Hāmiora Raumati’s eyes, and later his driver to tangi, to the annual Coronation celebrations of the Kīngitanga, and to major hui all over the island.

At St Saviour’s Church in Waitara the Reverend Mangatitoki Cameron was the missioner who encouraged Tiki to train for the ministry. Manga took Tiki to Bishop John Holland in Waikato and the journey began.

It lead to schooling, aged 21, at Tīpene, it lead to working with Canon Wi Te Tau Huata, it lead to working as a Stipendiary Lay Reader, including at Holy Trinity, Fitzroy, where he met his “English Rose”, Miss Wilma Cramp, who was teaching Home Science at the New Plymouth Girls School.

Tiki and I met at one of Wi Huata’s Waikato Māori Mission events in the late 1950s and again in 1963 at the All-Aotearoa Hui Tōpū at Tūrangawaewae – and Tiki, Hone Kaa and I started at St John’s Theological College that year.

In the final summer before our ordinations, Tiki and I lived with his older sister Matarena and Pepe Rau. During that summer we visited many of the aunts and uncles, we also visited the vicar of Okato, Paul Reeves, and Beverley, and I think their daughter Brigid.

At Easter 1965 Wilma gave a gift to Tiki of a beautifully stitched and embroidered red stole which he was to wear at his ordination, and which he wore as he lay on Ngāti Mutunga’s marae for his tangi, and which he wears still.

The gift arrived at the college, and Tiki, perhaps hoping for something edible, couldn’t wait for Easter Day but opened it on Good Friday.

In September or October of 1965 Bishop John Holland visited St John’s College to encourage us for our final exams and told us we would, “God willing”, be ordained on Saint Andrew’s Day, 30th November.

The bishop was fond of saying, in a deep ringing voice, “It’s a challenge”, a thought that Tiki took and adapted in many challenges to many people over the years.

The bishop had decided to hold the ordination in St Mary’s as Tiki was, as far as anyone remembered, the first person of Taranaki descent to be ordained, and he thought St Mary’s would be the ideal place, having himself once been the vicar there – but probably not understanding how difficult that would be for Taranaki iwi.

The words of the karanga of Tiki’s mother, Parehaereone, rings in the ears and memory of those who heard her as she led the family into the church.

The 50th anniversary of that ordination was one of the last services to be held in St Mary’s before it was closed because of earthquake matters.

Moving on to a series of places and dates for Tiki’s ministry.

From November 1965 to November 1966 Tiki was with Peter and Val Munton at Morrinsville as assistant to the vicar, and he would later work with Peter in Hastings.

On 30th November 1966 we three, Tiki, Derm and I, were ordained priest in Morrinsville, and at the same service Te Waaka Melbourne and Gordon Kaa were deaconed.

From 1966 to 1967, Tiki was assistant to the vicar of Taumarunui, Cyrus Meharry.

Early in 1967 the marriage took place at Holy Trinity Church, Fitzroy, of Tiki and Wilma.

Wilma’s bridemaid was at the tangi (and is here today), the Reverend Charles Hamilton, originally from Kawhia, was Tiki’s best man, and I was his groomsman, and later the same year Tiki was my groomsman.

While Tiki and Wilma were in Taumarunui, Roimata Alison was born, she was baptised at Saint Andrew’s Church in Cambridge by Fred Cook, who had been Tiki’s vicar at Fitzroy.

Fred’s wife Nancy was one of godmothers and I was the godfather.

Soon after that the family moved to Waitara for a couple of years and then to St Matthew’s, Hastings.

During the Heretaunga years Hāmiora was born.

In 1971, Paul Reeves was ordained a bishop and became bishop of Waiapu and Tiki and the family moved to Ōpōtiki where he was not only the vicar of the parish but the pastor of both Te Kaha and Ruatoki-Whakatane Māori pastorates. There are many tales in Te Whānau-ā-Apanui about Tiki’s ministry during those years.

During their time in Ōpōtiki Whiti joined the family, and later Inia was born in Ōpōtiki.

One of Tiki’s colleagues at Torere was Manuhiri Davis, perhaps the first of the minita-a-iwi, a scheme which Bishops Manuhuia Bennett and Paul Reeves developed to provide local ministry in every marae and district. There were more than 50 ordained in the 1970s.

In 1975, the family moved to Mt Maunganui. While Tiki was the vicar there, our old bishop, John Holland, retired into the parish, was able to help Tiki, and the boot was on the other foot.

Tiki was also involved with local iwi for tangi and services. Tiki oversaw the repair of the old vicarage and the building of a new 2 storied brick vicarage into which the family moved.

In 1978, Tiki was appointed the vicar of Paeroa, and in 1981 Priest-in-Charge of the Waikato Māori Pastorate. They lived opposite Tūrangawaewae marae and that continued Tiki’s relationship with the Kīngitanga.

Bishop Manuhuia was beginning to get some independence for Te Pīhopatanga o Aotearoa, and Tiki was given his 1st of 3 appointments as an Archdeacon: Archdeacon of Te Tai Hauauru.

Tiki was also asked by the bishop of Waikato to be an examining chaplain, to help choose new candidates for the ordained ministry.

In 1986 the family moved to Te Aroha, where Tiki was vicar for three years.

A big move took place in 1989. Tiki was appointed Archdeacon of the Wellington Māori Pastorate, his 2nd Archdeaoncry, and shortly after vicar of Rangiātea at Ōtaki. Roimata was married at Rangiātea Church.

This was the time of the establishment of Te Pīhopatanga o Aotearoa and its Hui Amorangi, and the new Hui Amorangi bishops were to be chosen.

During the tangi many speakers referred to the great shame and hurt when Tiki was nominated as the 1st bishop of Te Ūpoko o te Ika, but the nomination was annulled. A speaker at the tangi asked for forgiveness for Te Pīhopatanga o Aotearoa for treating Tiki and his family so badly.

What happened was not just the unfulfilled nomination, but the loss of his income, house and support.

Archbishop Philip said at the tangi that Tiki was, in truth, the real first bishop of Taranaki and not himself, and he took off his large pounamu pectoral cross, the symbol of a bishop, and placed it around Tiki’s neck, where it remains.

Fortunately, Ray Oppenheimer, vicar of St James’s, Lower Hutt, offered Tiki a short-term appointment there, and then the family went to Statford in 1992, where Tiki was vicar and also Chaplain to St Mary’s School.

In 1998, Tiki was appointed priest Kaumātua and after, in 2010, ‘Priest Kaumātua to St Mary’s Cathedral, Taranaki’, an appointment he held till his death.

Tiki was also awarded the Licentiate of Theology, L.Th.(Aotearoa).

Hone Kaa and I told Bishop Manuhuia Bennett that he was very useful in retirement, both to the iwi and to the hāhi (the church).

In retirement Tiki was involved in an enormous variety of ministry tasks:

~ there was his ministry to non-church people of the district and beyond;

~ his involvement with iwi matters;

“Te Atamira Tauwhenua”, Te Rōpū Kaumātua ō the Department of Internal Affairs, which meant many journeys to Wellington and elsewhere.

In 1985, when Sir Paul Reeves was appointed Governor General, he asked Tiki to guide him in the protocols of that office relating to Taranaki and other iwi, and that longstanding whanaungatanga and personal relationship continued till Sir Paul’s death, the tangi at Te Ana Tapu, Holy Sepulchre Church in Khyber Pass, Tāmaki, the burial next to the chapel at St John’s College, with the unveiling that followed.

The photo that was placed by Tiki’s coffin at the tangi was taken at Sir Paul’s unveiling and that is the photo inside your service leaflet today, we see Tiki in full flow.

At his tangi speakers talked of Tiki’s whakapapa links to so many iwi and his knowledge of whakapapa. People to whom he had ministered talked of his prayers, advice, burial of kin, marriages and baptisms.

They talked of Tiki’s working with other churches and and those on other spiritual journeys, of his continuing relationship with the Kīngitanga and the Coronation celebrations.

Many speakers mentioned Tiki’s vigorous style of preaching and praised his consistency of thinking. Tiki’s enthusiasm to challenge and encourage others was mentioned many times.

Tiki was, I believe, influenced by Wi Te Tau Huata, especially in his energetic and confident delivery, gospel faith, and Christian behaviour.

But it seems clear that the faith of Te Whiti o Rongomai was always at the base of Tiki’s thinking and preaching, his speeches and his prayers.

This was summarised many times during the tangi as:

[1] Pono. Truth. No matter what it costs, the truth will set you free;

Tiki was an advocate for reconciliation, for building bridges between opposing groups. He iwi kē, he iwi kē, kia whai i te mārama.

A number of speakers summed up his life saying of Tiki’s raukura “ko he manawanui ki te ao”, Tiki’s bearing the albatross feather as a sign of Te Whiti’s gospel of peacemaking, of an unwavering, steadfast, staunch and persistent attitude and behaviour to all.

Tiki’s burial at St Mary’s, a place of so much hurt, misunderstanding and controversy is a deliberate sign of bridging the gap, challenging future generations, Māori and Pākehā, to address the issues that are still unresolved.

It is Tiki’s way of seeing the future as a challenge which comes out of his love for all people.

Glory to God in the highest, may there be peace on earth, and good will to all people.